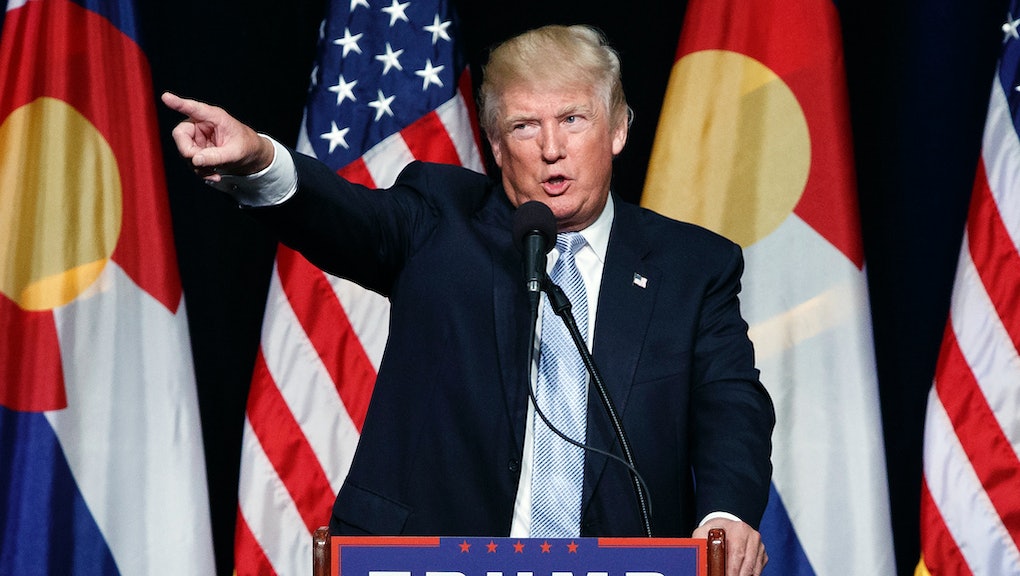 Donald Trump has ramped up his defenses against a fallen U.S. soldier's father who questioned his understanding of the U.S. Constitution at the Democratic National Convention in Philadelphia.

Khizr Khan, a Muslim lawyer and the father of Humayun Khan, the Muslim U.S. Army captain who was killed in Iraq in 2004, stood onstage alongside the elder Khan's wife, Ghazala, to speak out against Trump's proposed ban on Muslims and questioned his understanding of the Constitution, offering up a travel-sized copy from his suit jacket.

"I will gladly lend you my copy," Khan said Thursday, on the final night of the four-day convention. "In this document, look for the words 'liberty' and 'equal protection (under) law.'"

When questioned about the incident by the New York Times, Trump fired back that he'd "like to hear his wife say something."

In an interview with ABC, Trump doubled down on his insinuation that the reason Ghazala Khan did not speak was because she was not allowed to.

The comments spurred Mrs. Khan to pen a response in the Washington Post:

"Here is my answer to Donald Trump," she wrote, "Because without saying a thing, all the world, all America, felt my pain. I am a Gold Star mother. Whoever saw me felt me in their heart."

"Just talking about it is hard for me all the time. Every day, whenever I pray, I have to pray for him, and I cry. The place that emptied will always be empty," she added.

Trump also released a statement Saturday night devoted to Khan's comments, which simultaneously praised Humayun Khan's service and asserted that Khizr Khan "has no right" to criticize him.

"Captain Humayun Khan was a hero to our country and we should honor all who have made the ultimate sacrifice to keep our country safe," Trump said. "The real problem here are the radical Islamic terrorist who killed him, and the efforts of these radicals to enter our country and do us further harm.

"While I feel deeply for the loss of his son, Mr. Khan, who has never met me, has no right to stand in front of millions of people and claim I have never read the Constitution, (which is false) and say many other inaccurate things. If I become president, I will make America safe again."