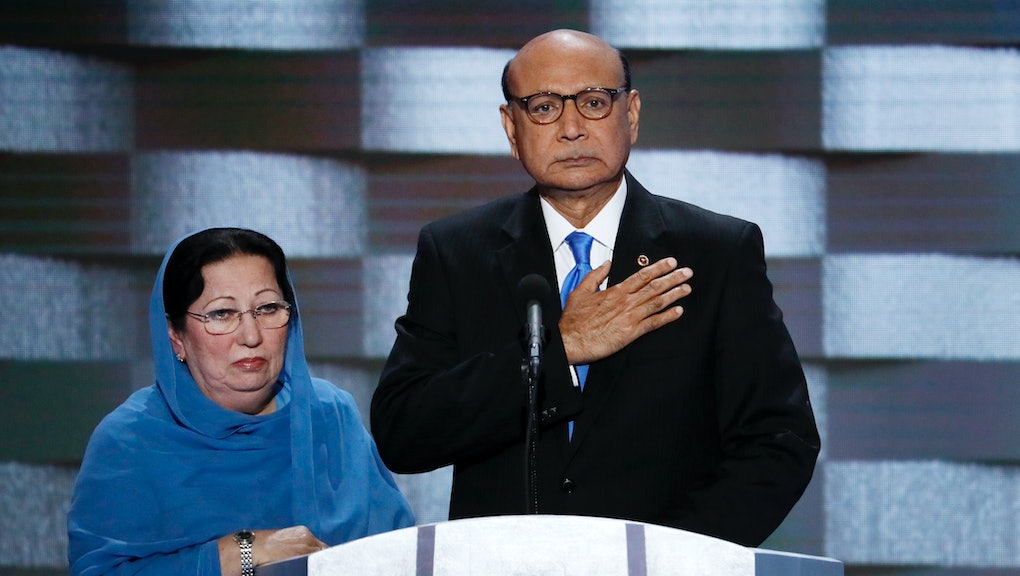 Ghazala Khan Hits Back At Donald Trump: "I Don't Think He Knows the Meaning of Sacrifice"

The parents of Humayun Khan, a 27-year-old Pakistani-American U.S. Army captain who died in Iraq in 2004 when a suicide bomber detonated a car bomb outside his compound, has responded to Republican nominee Donald Trump's mockery of their recent address at the Democratic National Convention.

After father Khizr Khan gave a speech discussing the sacrifice their family gave for the U.S. and rebuking Trump as having sacrificed nothing for the country, Trump responded by attacking his wife, Ghazala Khan, who stood by her husband during the speech.

"If you look at his wife, she was standing there," Trump told ABC News' George Stephanopoulos, apparently suggesting that Khan was being oppressed by the Islamic faith. "She had nothing to say. She probably, maybe she wasn't allowed to have anything to say. You tell me."

In a statement released Sunday, both parents fired back at the real-estate billionaire.

"I don't think he knows the meaning of the sacrifice, the meaning of the word," Ghazala Khan says in the statement. "Because when I was standing there, all America felt my pain without saying a single word ... I don't know what he missed there. Please, Mr. Trump, feel that pain and you will be better with understanding me."

"Running for president is not an entitlement to disrespect Gold Star families and [a] Gold Star mother, not realizing her pain," an angry Khizr Khan adds. "Shame on him. Shame on his family. He's not worthy of our comments. He has no decency. He is void of decency. He has a dark heart."

"I think my faith, Islam, has given us a strength," Ghazala Khan finishes the statement. "All the woman and men are equal in god's eyes ... I'm so sorry about that, that he does not have any idea what the Islam is."

In a separate op-ed in the Washington Post, Ghazala Khan wrote "I cannot walk into a room with pictures of Humayun. For all these years, I haven't been able to clean the closet where his things are — I had to ask my daughter-in-law to do it ... Donald Trump said that maybe I wasn't allowed to say anything. That is not true. My husband asked me if I wanted to speak, but I told him I could not."