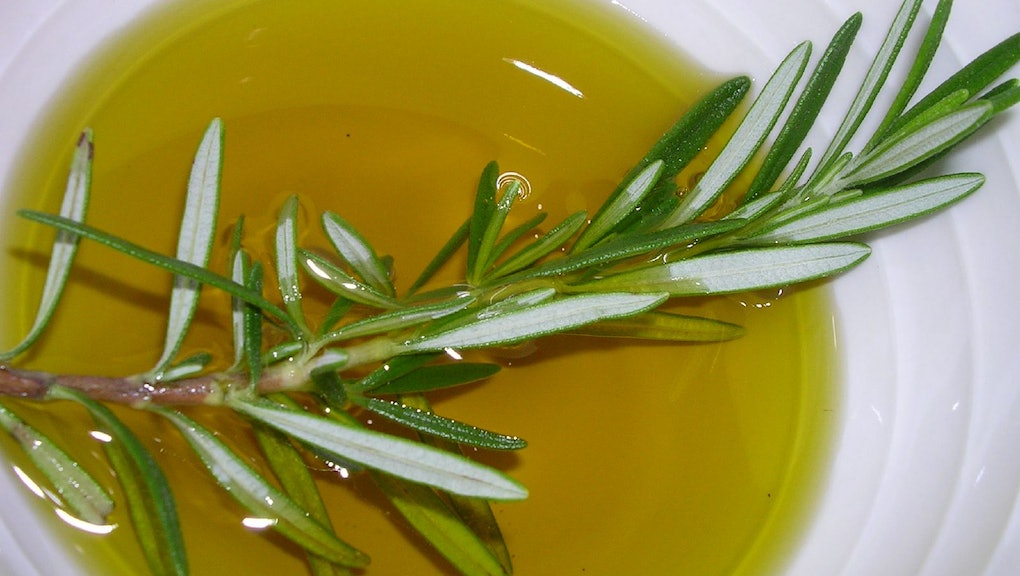 One of life's greatest joys is savoring a fluffy chunk of bread soaked with fragrant olive oil before a restaurant meal. But it turns out Americans are usually blissfully unaware of the quality oil they're paying for at the grocery store.

"We call the U.S. the world's dumping ground for rancid and defective olive oil," Sue Langstaff, a sensory scientist, told FiveThirtyEight. "We don't know the difference."

According to a consumer study from 2011, Americans actually preferred the taste of lower quality olive oil. And unfortunately, the olive oil industry might be pulling one over on all of us: A University of California, Davis, study from 2010 revealed that 69% of imported olive oils with the label "extra virgin" do not meet the requisite criteria.

One study found 69% of imported olive oils with the label "extra virgin" do not meet the requisite criteria.

What's the difference between good and bad olive oil? The two are set apart by how they're made, not by what type of olives they're made from, the Kitchn noted.

Unrefined "extra-virgin" olive oil is the highest quality oil. The term "extra virgin" refers to olive oil made without the use of high heat or chemical solvents, the Kitchn reported. EVOOs contain "important antioxidants and anti-inflammatories," Richard Gawel, an olive oil expert, told the Kitchn. The International Olive Council stated EVOO must have less than 0.8% oleic acid, a factor of acidity.

Virgin olive oil is unrefined (not treated) but has higher levels of oleic acid. The Kitchn noted this kind of oil is pretty rare — usually consumers will choose between EVOO, regular and light olive oil at a grocery store.

Light olive oil is a refined oil that has a higher smoke point. "Light" refers to a lighter flavor; it's not a reference to fewer calories, the Kitchn noted.

Pure or "regular" oils don't contain the same health benefits as EVOO. They're a blend of refined oil and virgin olive oil, and they "lack the important antioxidants and anti-inflammatories that make extra-virgin oil so special," Gawel told the Kitchn.

Rancidity occurs when EVOO goes bad. If EVOO gets exposed to light or heat, or if it's stored improperly, the anti-inflammatory properties dwindle and then vanish, the Daily Meal noted. It has to do with delicate polyphenols that are in EVOO.

But FiveThirtyEight pointed out that Americans may prefer rancid oils because they're less bitter. (Luckily, eating rancid oil probably won't kill you. EatbyDate noted consumers can use oils past their "best before" dates.)

You'll need a trained nose and palate (or a laboratory) to suss out whether an olive oil is high-quality.  Dr. Oz touted one method — if an oil gels in the fridge, it is EVOO — but that strategy is flawed, the Olive Oil Times reported.

If you want the best bang for your buck: Check the harvest date on a bottle of olive oil, NPR reported. Olive oil quality deteriorates over time, unlike wine and other fancy imports. (And some olive oil importers don't even list a harvest date on the bottle.)

If you store your olive oil in a cute glass carafe within arm's length of your stove, move that precious liquid, stat, the Kitchn recommended. Heat and light will kill the EVOO's freshness, and freshness is king.