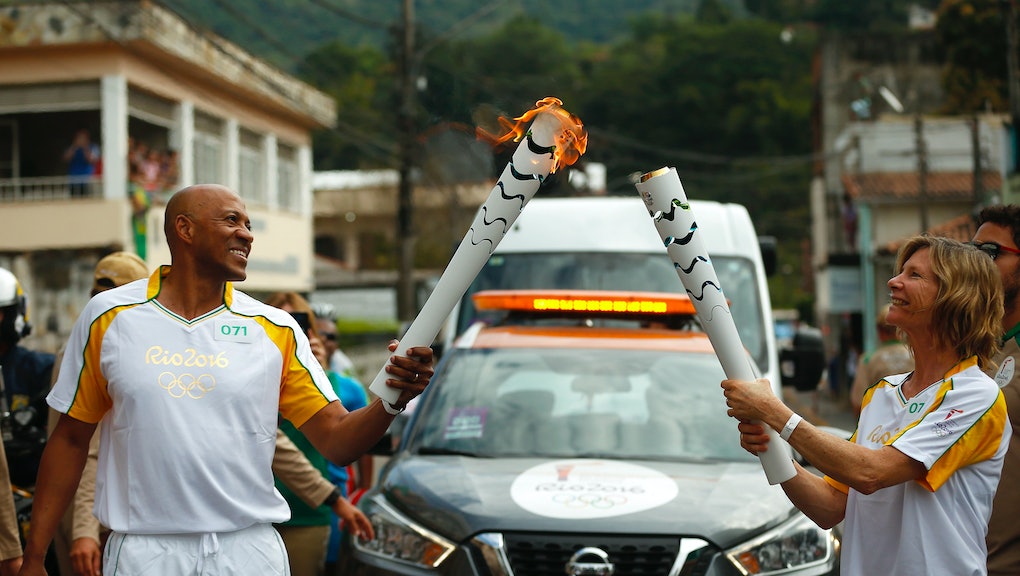 What's the Olympic Torch Made of? 7 Random Facts You Need to Know Before the Rio Olympics

On August 5th, the Olympic flame will enter Rio de Janeiro's Maracanã Stadium at the climax of the opening ceremony. There, after a months-long relay spanning three countries, it will light the Olympic cauldron.

Want to impress your friends with obscure Olympic torch knowledge as you watch the opening ceremony this Friday? Here are seven facts to know.

1. What's passed is the flame — not the torch

"Remember that what is passed in the relay is the Olympic flame, lit in Greece, not the torch," Rio 2016's website points out.

Also, when the flame passes from one torch to another, it's called "the kiss."

Fire was a "divine element" for the ancient Greeks, according to Rio 2016's website. They kept flames alight in front of their main temples — including at the sanctuary of Olympia, site of the first Olympic Games.

Today, the Olympic flame begins its journey in Olympia, in the ruins of the Temple of Hera. The Rio 2016 flame was first lit on April 21, with actors dressed up as ancient Greek priestesses.

3. It'll have traveled through three countries

The flame's journey started in Greece. From there it went to Switzerland — location of the International Olympic Committee — before arriving in Brazil.

By the time it reaches Maracanã Stadium, the flame will have traveled 36,000 kilometers within Brazil — 20,000 by road and 16,000 by air, according to the Olympics' website.

4. It'll have been carried by thousands of people

Approximately 12,000 people will carry the Olympic flame as it journeys around Brazil, according to Rio 2016's website. Each torchbearer carries the flame around 200 meters.

Torchbearers must be residents of Brazil, and are "recommended by the general public as 'everyday heroes' who represent the best of Brazil and who make a difference in their community," according to the Olympics' website.

5. The torches are made from recycled materials

Each torch is "crafted from recycled aluminum and resin with a satin finish" according to the Olympics' website. They each weigh between 1 and 1.5 kilograms — or 2.2 to 3.3 pounds.

This YouTube video reveals what's inside a Rio 2016 torch:

6. The design is symbolic

The top segments of the Rio 2016 torch represent Brazil's sky, mountains, sea and ground, according to the Rio 2016 website. The torch's triangular texture represents the three Olympic values: excellence, friendship and respect.

You can read more about the symbolism of the torch's design here.

7. We still don't know who will light the Olympic cauldron

Who will light the Olympic cauldron at the opening ceremony? It's kept a secret until the moment it happens.

Legendary soccer star Pelé is a top contender, according to NBC Sports. Another candidate is Vanderlei de Lima, the Brazilian runner who was leading the 2004 Olympic marathon — until a protester jumped out and attacked him. He ultimately earned bronze.