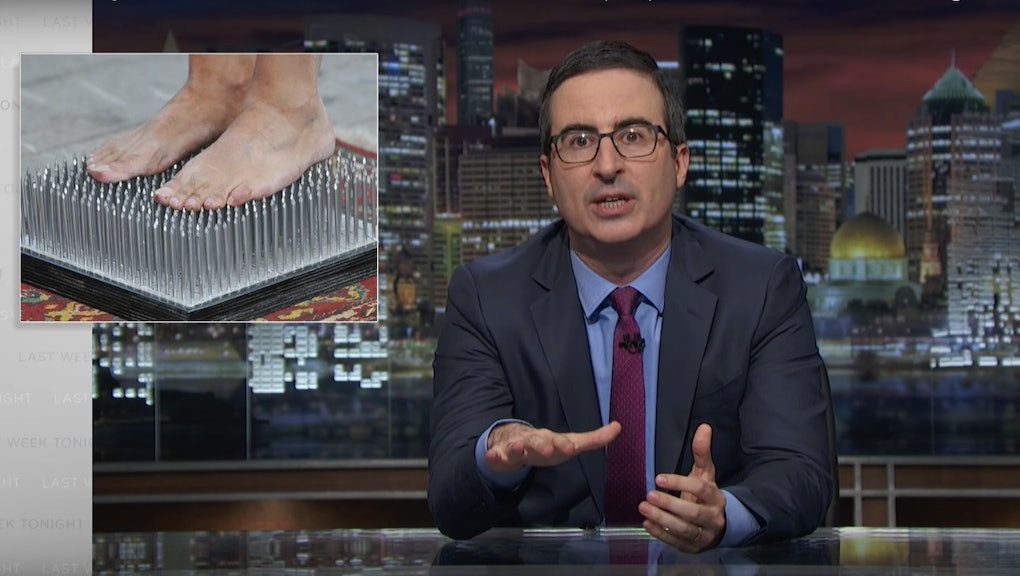 At last, someone has pinned down the psychology behind the perplexing rise of lying liar Donald Trump — or rather, nailed it.

On Sunday night's episode of Last Week Tonight, host John Oliver tackled the Democratic National Convention. There were apt characterizations of vice presidential nominee Tim Kaine as a "human sweater-vest" who's "basically the picture of a vice president that came with the frame" and of DNC speaker Khizr Khan's use of his pocket constitution "as a middle finger."

There was even a very choice best-of-the-rest montage. But in the most painfully hilarious segment, Oliver found the perfect figurative language for the Republican nominee's baffling ability to spew lies without any of their splatter really sticking to him.

Just this week, he declined yet again to release his tax returns, lied about getting a letter from the NFL agreeing with him that the debates shouldn't clash with football games, called Angela Merkel a moron, implied that Brazil brought the Zika virus on themselves and encouraged a foreign power's hack of his political rival. Now, two of those didn't happen, but you're not sure which two and that's kind of the point, isn't it? Because Trump hasn't said one crazy thing, he's said thousands of crazy things, each of which blunts the effect of the others.

"It's the bed of nails principle," he continued. "If you step on one nail, it hurts you. If you step on a thousand nails, no single one stands out and you're fine. That is how Donald Trump has managed to say pretty much anything in this campaign, seemingly without consequences."

Which, yes, that's one viable explanation for an otherwise confounding phenomenon. Another is that the shiny orange coating covering the candidate's skin is actually Teflon.