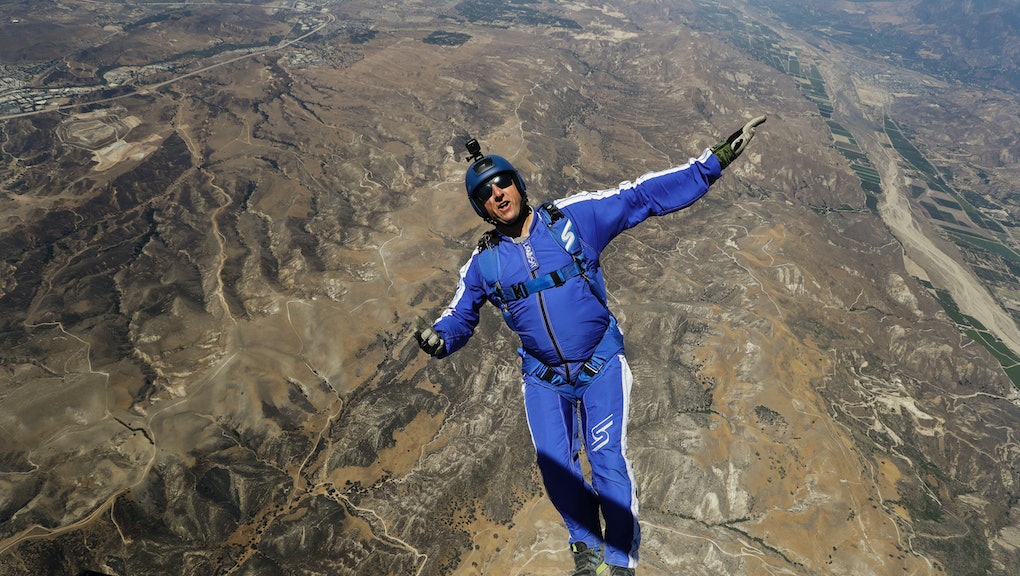 What compels a man to jump without a parachute from a plane flying 25,000 feet in the air? Someone seeking to break records, for starters.

On Saturday, Luke Aikins became the first person to skydive without a parachute — from almost twice the altitude of regular skydiving — landing instead on a giant net.

Aikins plummeted into the 100-foot-by-100-foot net (less than a third of the length of a football field), suspended 200 feet above the group in the Californian desert, at a leisurely 125 miles per hour.

Immediately after landing, the 42-year-old ran into the arms of his wife. The couple have a 4-year-old son.

He explained the details of the fall before performing the actual stunt, which was aired live on Fox:

No one else has ever completed a jump solo without parachute or a wingsuit. Other daredevils who initiated jumps without equipment have either grabbed a jumping partner wearing a parachute mid-air or put one on while falling.

Aikins used the wind currents to guide himself over the net, with the help of GPS and lights, which he said was the most difficult challenge of the stunt. "The wind changes all the time at different altitudes," he said, according to CNN.

He free-fell for two minutes on his stomach and in the last second of the fall, he flipped onto his back.

"My vision was always proper preparation and that if you train right, you can make anything happen," Aikins wrote on his Facebook page Saturday, after successfully completing the jump.

Aikins even works with the United States Parachute Association as an adviser, "where he provides advanced skydiving training to elite military special forces," NPR reports. His other professional stunt credits include the film Iron Man 3.

Adding to the drama of the event, the Screen Actors Guild unexpectedly mandated Aikins wear a parachute as he was boarding the plane, the Associated Press reports, insisting the stunt was otherwise too dangerous.

He briefly considered abandoning the mission when he was first told of the parachute requirement, then decided to proceed anyway, even though he had no intention of pulling the ripcord and landing on the net with a parachute would have been more dangerous.

"I'm going all the way to the net, no question about it," Aikins said in the airplane, according to AP. "I'll just have to deal with the consequences when I land of wearing the parachute on my back and what it's going to do to my body."

However, minutes before jumping out of the plane, the ban was lifted — due to disagreement amongst producers and other SAG members — and Aikins discarded the parachute.