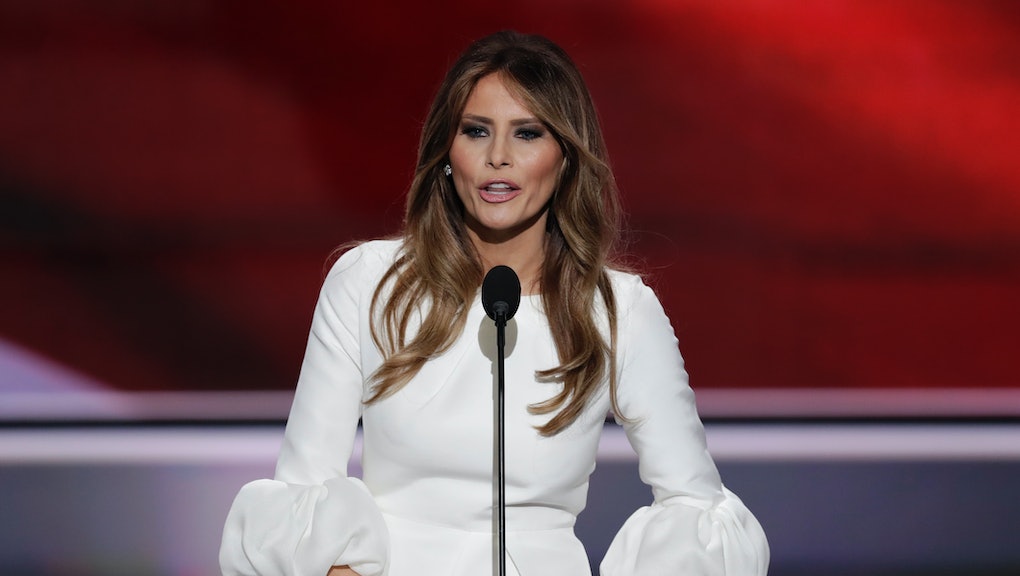 If You're Making Fun of Melania Trump's Nude Photos, You're Part of the Problem

On Sunday, the New York Post published a series of previously unseen images of Melania Trump, the wife of presidential candidate Donald Trump, nude alongside another woman. "Ménage à Trump," read the caption for the photos, followed by the equally witty and erudite headline: "The Ogle Office."

The photos, which were snapped by French photographer Jarl Ale de Basseville, were taken relatively early in Melania Trump's career, when she was 25 — three years before she'd met Donald Trump. A few of the snaps were published in Max, a now-defunct French men's magazine, in January 1996, yet many of the photographs are making their first appearance now.

Because Melania Trump is the would-be first lady, it makes sense that the images of her being embraced by a buxom Scandinavian model would cause quite a stir (which, presumably, was precisely the Post's impetus for publishing them, despite having endorsed Trump back in April).

Yet Twitter's pearl-clutching reactions to the photos are less indicative of Melania Trump's ability to hold the post of first lady, and more reflective of our instinct to shame any and all women who outwardly display their sexuality. That's doubly true if the woman is rallying for a position framed by a specific set of parameters by which she is allowed to express her sexuality — which, in the case of the first lady, is not at all.

Not everyone has rushed to plaster the scarlet "A" on Melania's exfoliated forehead. Some, like actor Octavia Spencer, have taken to Twitter to defend Melania Trump, excoriating the Post for launching such a "below-the-belt" attack. And shockingly, her husband Donald Trump also served as a voice of reason, issuing a statement defending his wife by saying that "in Europe, pictures like these are very fashionable and common."

Yet these cogent remarks have largely been overshadowed by those calling for Melania Trump's name to be written on the RNC men's bathroom wall.

These finger-wagging, tongue-clucking responses don't make sense for a few reasons, the most obvious being that the photos are from more than 20 years ago — long before she'd met The Donald and long before he considered holding any type of political office. Further, Melania Trump was a successful working model for years before hitting the campaign trail. As anyone who's ever seen an episode of America's Next Top Model knows, it's basically a prerequisite of the job to pose for sultry, pseudo-artistic nude photos such as the ones de Basseville took.

Yet the primary reason why we shouldn't care about Melania's nude photos isn't the argument that we shouldn't judge someone for the indiscretions of their youth, or that the photos themselves simply look like a second-rate version of the ones Yoanna and Shandi took during Cycle 2. It's that judging a woman for displaying her naked body is the ultimate form of slut shaming — and it's about time that we, as a country, regardless of political affiliation, started to move past that.

Melania's been slut shamed before. Whatever you think of Melania or her husband's politics, getting up in arms about a few awkwardly posed, Photography 201-level nude photos is the height of hypocrisy — not just for Republicans, but for Democrats as well.

It's no secret that both sides of the political spectrum have used sexist, demeaning language to describe Melania Trump. Back in March, the anti-Trump Mormon superPAC Make America Awesome released an ad painting her as a brain-dead slut, while on the opposite side of the spectrum, Jia Tolentino, a writer for the feminist website Jezebel, referred to Melania as so studiously proud, vapid and absent that she resists close analysis."

Following the Republican National Convention, after Trump was accused of plagiarizing First Lady Michelle Obama's 2008 DNC speech, Twitter attacked her for being a "whore," a "bimbo," a "plastic" "slut" and, in one moment of Oscar Wilde-esque wordplay, a "cock-juggling thunder cunt." Instead of keeping their criticism focused on the actual transgression at hand (i.e., that Trump clearly and methodically ripped off the first lady's speech), people instead opted for name-calling that would be better suited for a middle school bathroom wall, not a measured discussion about a presidential election.

Does showing your nips make you ineligible to be FLOTUS? Since the Post published Trump's nude photos, that particular brand of slut shaming has escalated. The assumption is that Melania Trump is somehow unfit to be first lady because she showed her nipples in a shitty French lad mag.

What critics fail to recognize, however, is that FLOTUS is not a publicly elected office to begin with. While first ladies like Hillary Clinton and Michelle Obama have used their platforms for good, campaigning for early childhood education and nutrition, they are not required to hold any strong political views whatsoever, nor do they have a ton of institutional power or pull. So questioning whether Melania is "fit" to be a role model as FLOTUS is ultimately moot — and even if that weren't the case, what, exactly, about posting nude photos renders you unfit to be a role model to begin with?

Regardless of the fact that the FLOTUS is ultimately a ceremonial post, the First Lady has nonetheless been held to rigorous, often sexist standards of behavior — arguably, even more so than the President himself. Indeed, there is a precedent for pearl-clutching over first ladies' "scandalous" behavior: 60 years ago, Jacqueline Kennedy was reprimanded for wearing expensive Parisian fashions, while former first lady Betty Ford was referred as "No Lady" by the press for speaking candidly about marijuana, her struggles with alcohol abuse and her sex life with her husband. Even as recently as 2008, first lady Michelle Obama (whose comportment has frequently been compared to that of Melania during this election year) was harshly upbraided for showing her arms.

So if you're tempted to tweet ménage à Trump puns or jokes about Melania Trump being the "first slut," do yourself (and American history) a favor: Don't. Focus instead on attacking her husband's immigration policy, or his attacks on the family of a deceased Muslim soldier, or any of the other myriad aspects of his platform that could easily lead to the dissolution of American values if he is elected. Don't focus on his wife's nipples, or the fact that she chose to bare them in a French photo shoot more than two decades ago. If you do, then you are just as much a part of the problem as Donald Trump is.