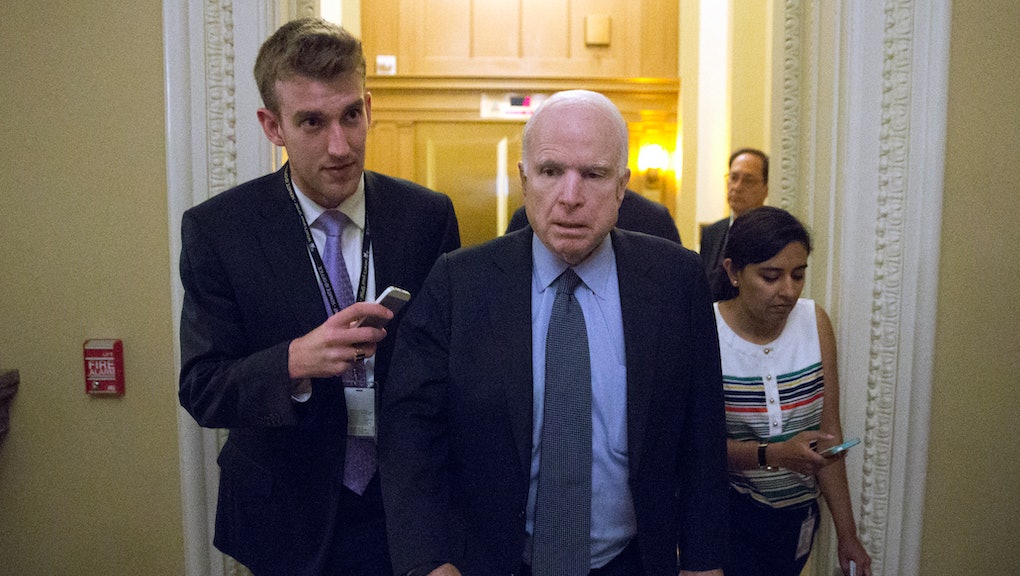 Sen. John McCain on Monday denounced Donald Trump's comments on the Muslim American family whose son died in the Iraq War, saying Trump's statements "do not represent the views of our Republican Party, its officers or candidates."

McCain's rebuke of his party's standard bearer, and his attempt to distance other Republicans from him, shows just how damaging Trump's attacks on Khizr and Ghazala Khan have been on his electoral chances in November.

"In recent days, Donald Trump disparaged a fallen soldier's parents. He has suggested that the likes of their son should not be allowed in the United States — to say nothing of entering its service. I cannot emphasize enough how deeply I disagree with Mr. Trump's statement," said McCain, a former GOP presidential nominee and one of the country's most revered veterans, having been detained and tortured for five years in Vietnam.

McCain is just the latest Republican to denounce Trump's attacks on the Khans, who, in a speech at the Democratic National Convention, said Trump's policy to ban Muslim immigrants from the United States would have prevented their son — who died serving in Iraq — from entering the U.S.

The Khans questioned whether Trump had read the Constitution before proposing the Muslim ban, and have said keeping Trump out of the White House is a "moral imperative." In doing so, they earned the scorn of Trump himself, who said he had sacrificed just as much as the Khans — despite not serving in war nor losing a child on the battlefield.

Trump went on to call the Khans' comments "vicious," said the Khans had "no right" to question whether Trump read the Constitution, and even attacked Ghazala Khan for allowing her husband to do the speaking at the DNC, suggesting her Muslim faith is what likely silenced her.

After Trump's comments, the Khans have made the cable rounds to defend themselves, saying Trump doesn't understand the "meaning of sacrifice." Ghazala Khan added that she did not speak at the DNC because she is still overcome with grief over the death of her son.

Senate Majority Leader Mitch McConnell, House Speaker Paul Ryan and New Hampshire Sen. Kelly Ayotte have also come out against Trump's attacks on the Khans. But none of the Republicans who have repudiated Trump's statements have revoked their support of Trump's campaign — including McCain.

Neither McConnell nor Ryan even mentioned Trump in their statement.

"I agree with the Khans and families across the country that a travel ban on all members of a religion is simply contrary to American values," McConnell said.

"This shouldn't be hard," Reid said in a statement on Sunday. "Donald Trump is a sexist and racist man who insults Gold Star parents, stokes fear of Muslims and sows hatred of Latinos. He should not be president and Republican leaders have a moral responsibility to say so?."