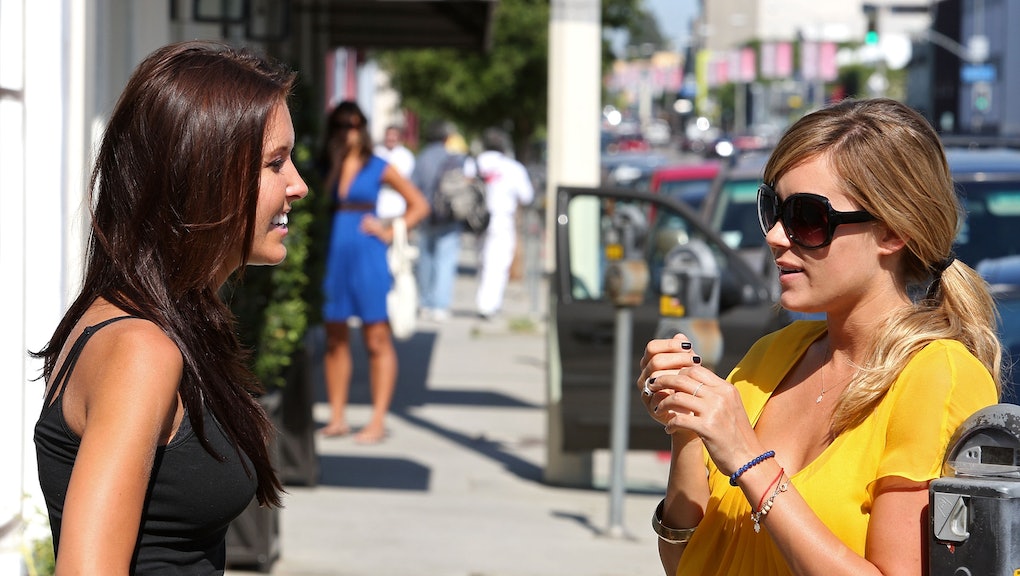 ‘The Hills’ 10th Anniversary: Ranking the Show’s 10 Most Dramatic Moments

Before there were Real Housewives in nearly every time zone, The Hills gave us all the calculated drama a reality TV fan needed.

The Hills, a spinoff of MTV's Laguna Beach, turns 10 this year — a fact surely horrifying to the teens and tweens who watched the show when it first debuted. To celebrate the anniversary, MTV is airing a The Hills: That Was Then, This Is Now special on Tuesday. The special will feature beloved reality-star-turned-author-turned-lifestyle-guru, Lauren "LC" Conrad, spilling all the tea on the real story behind the "reality."

The show's six seasons gave way to some iconic reality show moments. From Lauren and Heidi's infamous club spat to the show's divisive final scene, The Hills always delivered the drama — real or not. In honor of the 10th anniversary, here are our picks for the top 10 best.

The moment that was really the beginning of the end. In the series premiere of The Hills, Lauren had just begun working at Teen Vogue while her best-friend Heidi Montag was keeping the chairs by the pool vacant. Heidi and new friend Audrina Patridge arrive unannounced to the Young Hollywood Party that Lauren was working. Lauren unwillingly sneaks her surprise guests in – only to be reprimanded after her boss finds out.

Unlike Lauren's hair color, Heidi and Lauren's friendship would not get better after this moment. It was the earliest sign of their eventual demise.

9. Heidi moves out of her apartment with Lauren.

Remember when Rachel moved out of Monica's apartment on Friends and it was "the end of an era?" This was basically the same kind of classic TV moment. The two had been falling out of their friendship for a while, and Heidi's relationship with boyfriend Spencer Pratt was only getting more serious. Heidi decided to move in with Spencer and out of her apartment with Lauren. She gave Lauren a longing "I'll miss you" stare from the rental truck's passenger mirror, but it was clear they were now divided.

It's hard to forget that the women of The Hills actually had day jobs. But they did! They totally did! In season four, Lauren and Whitney were working under Kelly Cutrone and were tasked with styling a then-unknown Lady Gaga at an event. Gaga, in a look similar to her "Just Dance"-era aesthetic, was having issues with one of her costumes. Luckily, Lauren came to Mother Monster's aid and mended the situation. It was probably this exact moment that was the catalyst for Lauren's eventual lifestyle brand.

Of all the cast, it was the "Body Language" songstress Heidi Montag who was most overcome by the fame. By the end of the show's run, she had become a different version of herself entirely. The reality-star-turned-singer was very candid about her extensive plastic surgery and the show documented that thanks to her willingness to share.

Between the show's fifth and sixth seasons, Heidi had gone under the knife and returned nearly unrecognizable, much to the shock and awe of her mother and sister. It is maybe the most surreal moment in the show's history — and an all-too-real example of how celebrity affects reality show stars.

6. The studio lot reveal in the series finale

When you talk about divisive series finales of the 2000s, two instantly come to mind: The Lost series finale and The Hills series finale — both from 2010. What a year! The final scene of the show's series finale arguably doesn't get enough credit for creatively winking at the long-dodged rumors that it was entirely scripted.

It ends on Kristin Cavallari, the ex-Laguna Beach star who had taken over for Lauren when she left after season five, saying goodbye to former fling Brody Jenner. As the on-again-off-again couple is biding each other farewell, the camera pulls away to reveal it's been filmed on a studio lot, cleverly alluding to the show's long rumored faux reality.

They were the wedding bells heard around the Hollywood Hills! Heidi Montag and Spencer Pratt, after two failed attempts, were finally getting married! And, after two conversations with both Heidi and Spencer, Lauren was convinced enough to, begrudgingly, show up to their wedding. In the show's season five finale, Lauren lets bygones be bygones with Heidi and parts from the series.

While Lauren is in the dressing room wishing Heidi all the best on her terrible life choice, LC's former Laguna Beach frenemy Kristin makes her grand entrance at the wedding. Lauren, in an iconic blue dress and black Chanel bag, leaves the wedding and the show after season five to become "New York Times best-selling author Lauren Conrad." In the same scene, Kristin swooped right in to replace Lauren by catching Heidi's bouquet. Truthfully, however, the show was never quite the same. While Kristin was a great villain, The Hills and it's characters were built around Lauren and her absence was felt.

Lauren and the always-in-awe Audrina had been having their issues. Audrina believed rumors that Lauren was getting involved with Justin Bobby, and it created tension between the two. Lauren got overwhelmed during their argument — and then it happened. The single black tear fell and all was forgiven. What we still can't get over is that all of this happened while Lauren was away.

3. "She's gonna always be known as the girl who didn't go to Paris."

In a page straight out of Carrie Bradshaw's how-to-screw-up-your-life-because-of-a-guy handbook, at the end of season one, Lauren was given the opportunity to intern in Paris for the summer. Lauren — and her chunky season one blonde highlights — was interning at Teen Vogue alongside a very blonde Whitney Port. Both were given the opportunity, but Lauren decided to choose spending her summer with on-and-off flame Jason Wahler.

During the season two premiere, both Whitney and Lauren return to the office and meet with their boss. Lisa Love, the senior editor for Teen Vogue at the time, recalls how both girls spent their summer and, in that moment, Lauren became "the girl who didn't go to Paris."

2. Lauren confronting Heidi on the couch: "He's a sucky person!"

This deliciously quotable fight between the soon-to-be ex best friends over everyone's least favorite person – Spencer Pratt, naturally – was so heated that Lauren never even had to leave her couch. Spencer and Heidi set up their friend Jen with Brody, and Lauren was just not having it. It was one of the earlier salacious moments that we would soon come to expect and, in turn, gave us the greatest gift: the line "He's a sucky person!"

1. Heidi and Lauren's fight in the club

Before there was the table flip heard around the world on The Real Housewives of New Jersey, there was Heidi and Lauren's spat at the club in season three. The series had been building to this moment as Lauren was dealing with the rumor of an alleged sex tape; a rumor ostensibly started by Spencer.

Lauren and Heidi were both at the same club, and Heidi confronted her as she was leaving. The ex-friends had it out about that "sick little rumor." It was the first time the show acknowledged the cast's rising celebrity; the rumored sex tape had been gossip fodder for months.

It is the show's most defining moment, as it was the peak of the demise of the friendship of its two central characters. This moment was also the catalyst for the narrative that followed: Hope for reconciliation between the two. It never really happened, and alas, the rest was still unwritten.