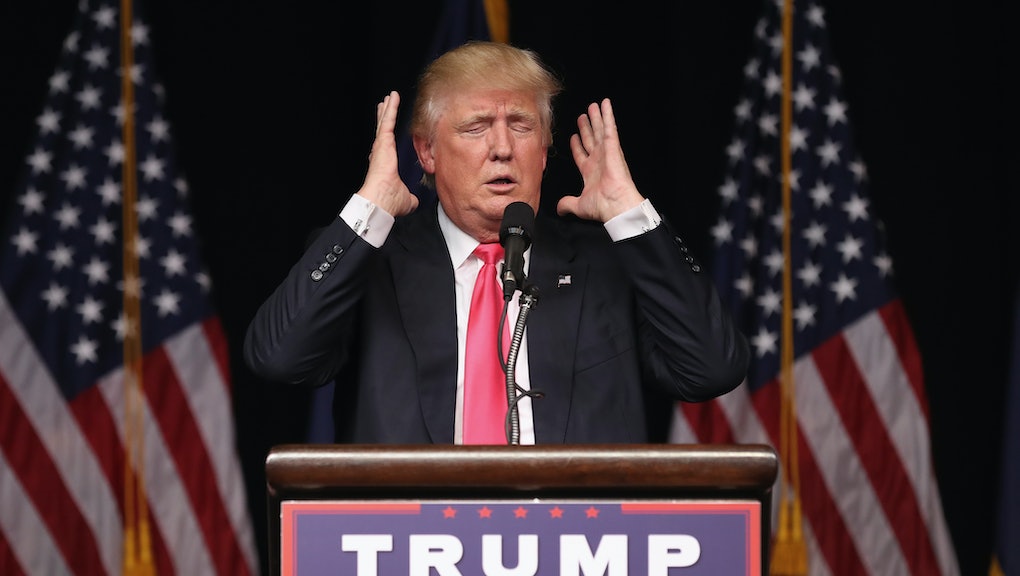 Trump Thinks This Election Is "Rigged." He’s Obviously Referring to His Own Party, Right?

None other than Republican presidential nominee Donald Trump suggested Monday the upcoming federal elections in November will be "rigged" against him.

"I'm afraid the election's gonna be rigged," Trump told a rally in Columbus, Ohio, reported CBS News. "I have to be honest. I hear more and more that the election on November 8th. Can you believe we're almost there?"

By one measure, presumably the one Trump intended, there is little evidence to back his assertion. While advocates of voter ID laws and other electoral restrictions often cite election fraud as a justification for those policies, the actual election fraud cited is not common in the United States. In 2014, the Washington Post reported, a major roundup of available research and journalism on the subject of voter fraud found an "overwhelming scholarly and legal consensus that voter fraud is vanishingly rare, and in fact non-existent at the levels imagined by voter ID proponents."

Despite the lack of evidence, the myth of electoral shenanigans remains widely believed among many Americans, the New York Times reported in 2014 — and it's not hard to see why. The powerful incentive in claiming fraud is the assertion that it's an easy way to delegitimize political opposition and push through restrictions on voting rights.

The New York Times reported Sunday on the wave of new voting restrictions and challenges to voter eligibility pushed through in the wake of the Supreme Court's decision in 2013's Shelby County v. Holder might be doing just that. The ruling, which struck down parts of the Voting Rights Act, opened the door for all or part of 15 states to close polling places or relocate them, purge voter rolls, shut down places in voter ID states where such IDs can be obtained and draw new electoral districts.

A 2014 paper by the Brennan Center for Justice concluded long lines for the polls on election days tend to fall in minority-heavy voting precincts, while those same precincts often had the greatest shortfalls in machines, poll workers. These gaps persisted despite laws requiring resources be allocated to shorten lines in those places.

In many cases, the people most likely to have their right to vote impacted were minorities, young people or other Democratic-leaning constituencies. According to Sean McElwee, a researcher for progressive think tank Demos, young nonvoters are significantly more likely to support left-leaning economic policies and thus their exclusion from the process tends to benefit more conservative candidates.

So what kind of Election Day rigging is Trump worried about? There's not much to suggest voter fraud exists on a scale that could tip an election for Democratic nominee Hillary Clinton. On the other hand, there's a lot to suggest Trump may benefit significantly from voter ID laws and other implicit and explicit barriers to voting in November. So if he finds himself a big loser on Election Day, the talk of "fraud" will just be another cheap excuse.