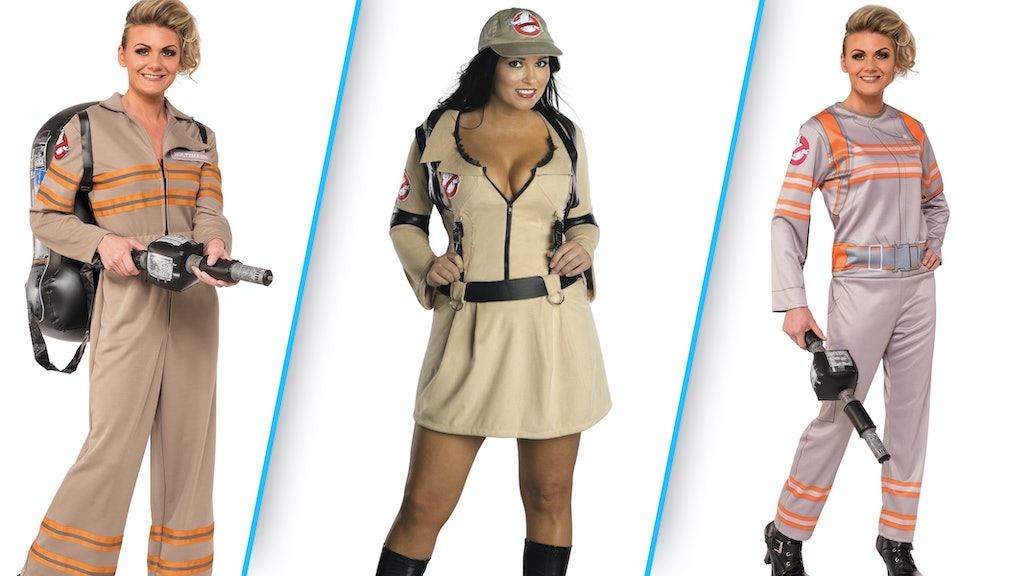 'Ghostbusters' Halloween Costumes Are Here — And Sexist as Hell

With the all-female reboot of Ghostbusters going into its third week at movie theaters across the country, the outrage seemed to be quieting — the thinkpieces and Twitter trolls were petering out. It was almost like we could live in peace once more.

Sadly, that is just not the case. The reason? Halloween.

Over on Fusion, there is already a discussion on how many Ghostbusters Halloween costumes are problematic.

With sexy Halloween costumes being the norm, it's no surprise that Ghostbusters is getting sexier for October too. Head on over to HalloweenCostumes.com and you will see these:

"These are cute and fine and I like them! There's just the one thing," Molly Fitzpatrick writes on Fusion. "Though [the] Ghost Fighting Boots are available for $34.99, this model is inexplicably wearing what — for lack of a better fashion vocabulary — I would call pilgrim buckle heels, as if she were just posing in a witch costume as part of a marathon Halloween costume photoshoot and forgot to finish getting changed for this Ghostbusters look."

For what it's worth, the Ghost Fighting Boots are flat, but the models are seen wearing these weirdly goth heels that are definitely sold at a Hot Topic near you, and pairing them with this non-sexualized costume, insinuating that this is a much better look than actually wearing the boots. (The men's costumes, of course, come sans heels.)

Yes, the purposefully sexed-up Ghostbusters costumes do exist, which is definitely expected, but it is odd to see how not even a jumpsuit (which is arguably one of the least gendered garments one can wear) that covers 80% of a woman's body has to be sexed-up.

In the movie, by the way, the jumpsuits remain ungendered, which thrilled viewers who were stoked that the women kicking ass in this movie were, for once, not wearing stilettos.

Already, the uproar is similar to when the new Power Ranger movie uniforms were released, which showed the female rangers wearing wedges.

But other than the idea that these costumes should be paired with heels, there is also a problem with the wig that is supposed to be emulative of Leslie Jones's hair in the movie.

The image on the left is Jones's character in Ghostbusters. On the right is the yarn wig meant to look like Jones's hair. Especially now, it's as though Jones is unable to catch a break, with the nearly incessant stream of racist Twitter trolls throwing vitriol her way. Jones chose to take a break from Twitter, and this is another instance of her being disrespected.

"My stomach is already turning over the possibility that a handful of idiot white kids will get the bright idea to make their traditional Halloween blackface Ghostbusters-themed this year," Fitzpatrick writes. "Also, purely from an aesthetic perspective, the Patty wig is almost insultingly inaccurate."

And that is true — it's the least accurate of all the wigs available to Ghostbusters fans on HalloweenCostumes.com.

So clearly, if you thought Ghostbusters outrage was over, think again.