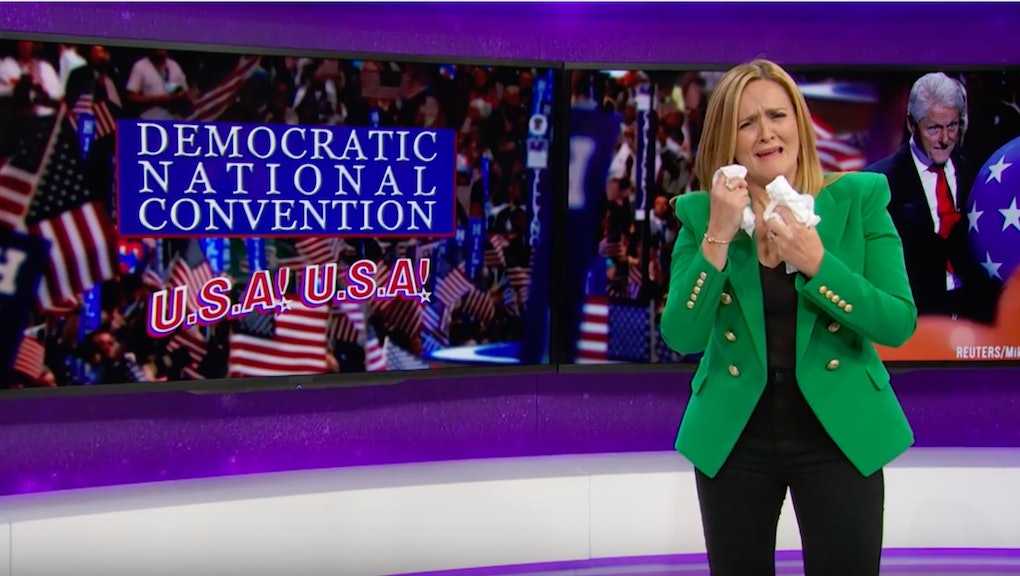 While the Republican National Convention was mired in paranoid rhetoric from Donald Trump and his constituents, Samantha Bee heard a different tune at the Democratic National Convention last week. The Full Frontal host was ecstatic about the historic nomination of Hillary Clinton, which was noted far and wide as a huge milestone for women.

However, as Bee noted, the criticism directed at Clinton from conservative media and politicians had sexist undertones.

The Clinton criticisms dumbfounded Bee, especially when comparing her words to Trump's. His response to Khizr Khan, the father of fallen Army Capt. Humayun Khan who spoke at the DNC, has been particularly baffling. Khan ended his speech by unveiling a copy of the U.S. Constitution from his suit pocket, noting that Trump doesn't appear to have a grasp of the Constitution given his stance on temporarily banning Muslims from the country.

"He even picked out a copy of the Constitution small enough for Trump to fit in his hands," Bee added.

But Trump's biggest takeaway from Khan's remarks were directed at Khan's wife, Ghazala, who didn't speak during the speech. Trump insinuated that she wasn't "allowed" to speak.

While Trump made those claims against the Khans — among many other controversial statements during his candidacy — Bee noted that Clinton has clinched the endorsements of former presidents, the current president and "just for good measure, half the fucking Pentagon standing on stage saying vote for Hillary if you want to live."

Yet while Clinton's numbers are up in recent polls, it's not a given victory. This is likely going to be a tight race, against all odds.

"That is how good you have to be if you're a woman running for president," Bee concluded. "And she still might lose to this: the least qualified candidate ever to lurch into the public spotlight and shit on Gold Star moms while cradling Putin's sweaty sack. Let's hope Hillary doesn't get lipstick on her teeth between now and November or it's all over."

You can check out Bee's breakdown of the DNC below: