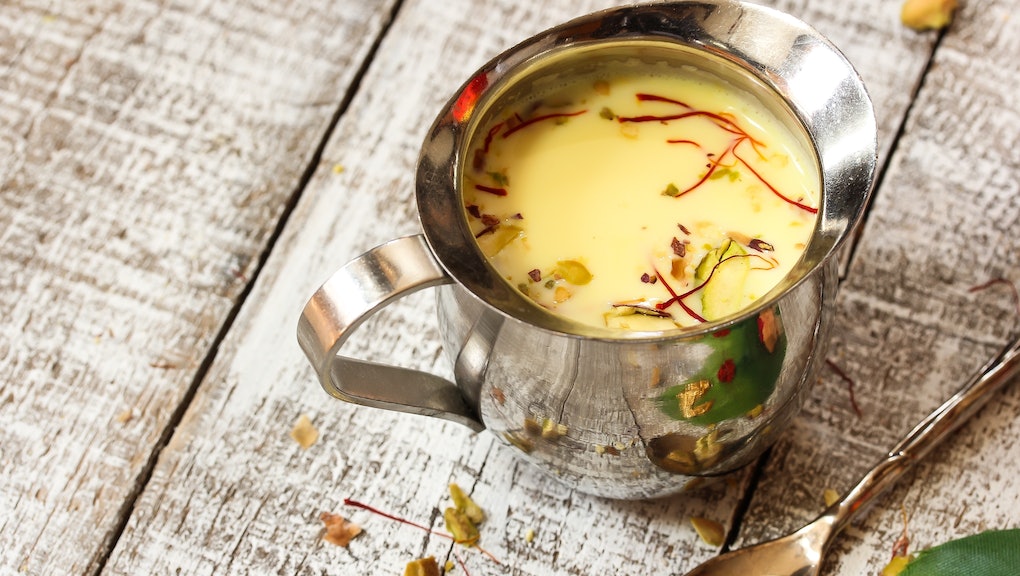 Indian Almond Milk Isn't Vegan, But You Should Definitely Be Drinking It

The words "almond milk" tend to conjure up images of the thin, white liquid that is omnipresent at health food restaurants and vegan lattes. The milk, which is made from soaked and blended almonds, is a great option for the dairy averse. Go to India and ask for almond milk, however, and you'll be presented with a completely different and decidedly not vegan beverage.

Indian almond milk, or "badam doodh" as it's often referred to in Hindi, is a rich and incredibly creamy drink. It's typically made with a higher fat milk, and many like to add in a bit of cream too, Nik Sharma, the Indian cook and photographer behind the award-winning food blog A Brown Table explained in an email.

To create the drink, skinless almonds and pistachios are ground into a powder and boiled with milk, sugar and cardamom. "Many people prefer to add saffron to the drink, but others will add some rose water instead," Sharma added.

Once the ingredients have been boiled together, the drink is garnished with more crushed pistachios, or almond slices (or both), and sometimes a few more strands of saffron. The result is a sumptuous beverage laced with warm spices that has nutty undertones and a delicate sweetness from the saffron and sugar. Unlike vegan almond milk, badam doodh has a light yellow hue — thanks to the saffron.

The drink finds its origins in Northern India, Sharma noted. "Hindus and Muslims often drink the almond milk at festivals and celebrations." It can be served warm in the winter, but most people tend to drink it cold, Sharma said. "It is often consumed at breakfast, especially on a hot summer day to cool off." While it's not traditional to pour the drink over ice to cool it down, Sharma explained, it's a great method for those who don't feel like being patient.

Almond milk is frequently sold by street vendors in Bombay, but those who can't make it to India can make their own version from scratch at home. Want a taste? Check the menus at local Bombay Indian restaurants, or head to an Indian grocery store and pick up a canned version.

But wait, there's more: Those who want a more homemade effect but don't want to go through the effort of grinding nuts can purchase a powdered badam doodh mix.

While badam doodh isn't inherently vegan, in theory it's possible to make a somewhat meta version of Indian almond milk with regular almond milk. Just make sure to add in some fat, like coconut or cashew milk, to make the drink a bit more luscious and rich.