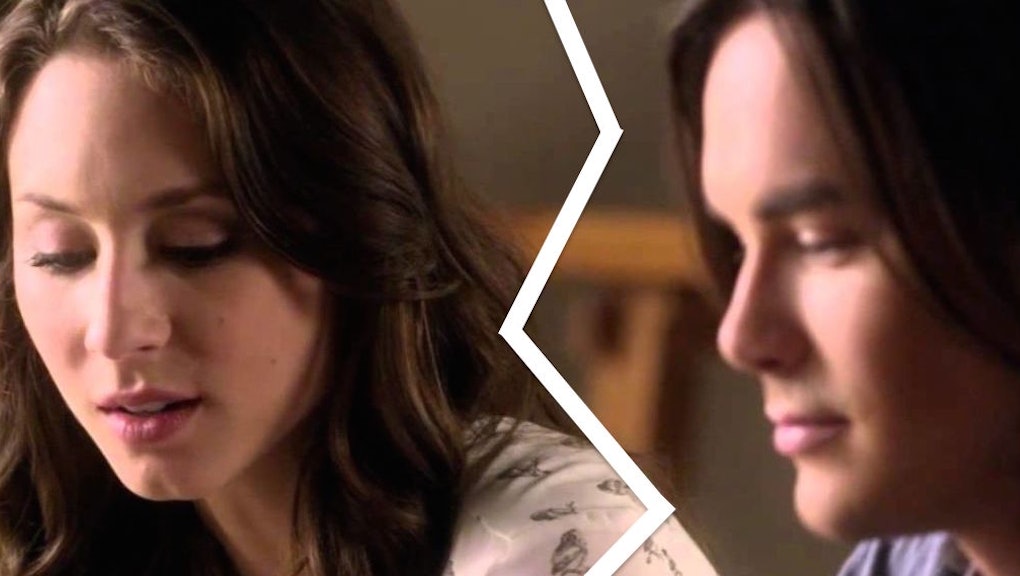 In the sinusoidal wave of action that has been this season of Pretty Little Liars, episode six (titled "Wanted: Dead or Alive") was a definite high.

(Editor's note: Spoilers ahead for the seventh season of Pretty Little Liars.)

The episode's centerpiece is the search for Elliott Rollins (aka Archer Dunhill). His whereabouts are unknown both to Rosewood's police and the Liars. Detective Furey tells the girls that Archer was wanted back in the U.K., and that Ali is still in danger. He (or someone else) was leaving a trail to throw them off the scent of his real location and plan.

This would normally cause the girls to go into full blown cover-up mode, during which they'd completely blow their own cover. But Hanna continues to get calls from a vaguely British-sounding accent on Archer's burner phone, which makes them doubt they truly killed him. "Next time you bury someone, make sure they're dead," the unidentified voice says. (Side note: Why do they still have his burner phone? These girls learn nothing.)

Spencer and Aria try to comfort Hanna by saying that the voice is probably Jenna or Mary Drake screwing with them, but Hanna brings up an excellent and obvious point: They thought the same thing about Ali.

This leads Spencer and Hanna back to Archer's grave to dig him back up. His death certificate comes in the form of his decaying corpse, and Uber A catches the girls on night-vision camera. Oops. (They're also not wearing gloves again. Why?)

Archer's confirmed death means that he isn't the one who called the burner phone to say he's about to attack Ali. "First you turn her in, then you leave her all alone?" the unidentified voice said. "Stupid bitches." The audience knows it's the rubber-masked fake police officer stationed outside Ali's house, but she invites him in to feel safe. He then brutally beats her up and strangles her, only to be scared away by other police sirens, though Ali does manage to rip half of his mask off in the process.

But besides all that, the real big moments of this week's episode happened to fans' favorite (and least-favorite) couples.

Bye-bye, "Spaleb." Caleb comes back from his pout-about-town — turns out he never even left? — and he and Spencer finally shoot the horse dead. The end of the story was a long time coming, but Spencer added some sweetness to it by saying that she was happy to have tried dating. It helped thaw her heart after her breakup with Toby, and to "remember what it felt like to be in love again." Could this make for a possible "Spoby" comeback?

Hanna finally admits to Aria and Spencer that she broke off her engagement with Jordan. In classic Hanna style, she doesn't go into details, but she does throw her fake diamond ring off of the steps of the police station. When Spencer finds out that Hanna kept her heartbreak a secret for the sake of "Spaleb," she urges Hanna to tell Caleb.

After six seasons, multiple breakups, job changes, family drama, exes, a fake son and more lies than you could count, Aria and Ezra are finally engaged; fans could not be happier.

Turns out she only put off saying yes because she's afraid of going to jail for killing Archer. But come on, Aria — you're always about to go to jail. The question remains, though: Who called Ezra from his dead fiancee's phone? Is Nicole still alive? If so, then she's definitely on her way back to break up this wedding just before he says "I do."

I've said it before, and I'll say it all season: Emily and Ali is a fated couple. Each new episode of season seven has dropped new breadcrumbs leading toward this being realized, and Tuesday's episode laid it on thick. From tender confessions and warm embraces, to Ali putting on a sexy record, to the two sitting drinking wine by a fire talking about an ambiguous "our first kiss" (she meant Elliott, but come on), fans know it's coming — and they're anxious.

Sarah Harvey has plagued fans for too long — but, thanks (probably) to Uber A, we're now rid of her for good. Her figurative kiss of death was finally showing that she's not all bad and telling Emily that she cares for her and wants to protect her from someone whom Jenna doesn't allow her to reveal. Said predator comes to Sarah's door and intercepts her just as she's just about to get the hell out of dodge, leaving her dead and gloveless in her bathtub. The killer stripping her mangled hands — which, by the way, aren't even that bad — is either pointlessly dramatic or a clue to his/her identity.

Over in Ali's world: One of the themes of this episode was overwhelming pity for Ali due to her growing list of trials and tribulations. Her friends turned her over to a cold-blooded killer, her husband is a fraudulent sadist, Charlotte was just using her to get out of Welby, neither her brother nor her father came to support/save her while she was in a mental institution. It's been a rough go for Ali.

Elsewhere in the episode, it seems Mary Drake might not be all bad. Spencer is convinced that she's not on Uber A's side. She seems genuinely frightened of Archer's return, believes him to be alive, and later tells Ali a semi-moving story about her sister Jessica stealing Charlotte literally from her womb. She has the scar to prove it.

The next episode is sure to be rife with drama and action, if the preview is any indication: Jason returns looking like Jesus, the FBI gets involved and the girls might be blown up in a car. Spencer's right: "No one is really safe in Rosewood."