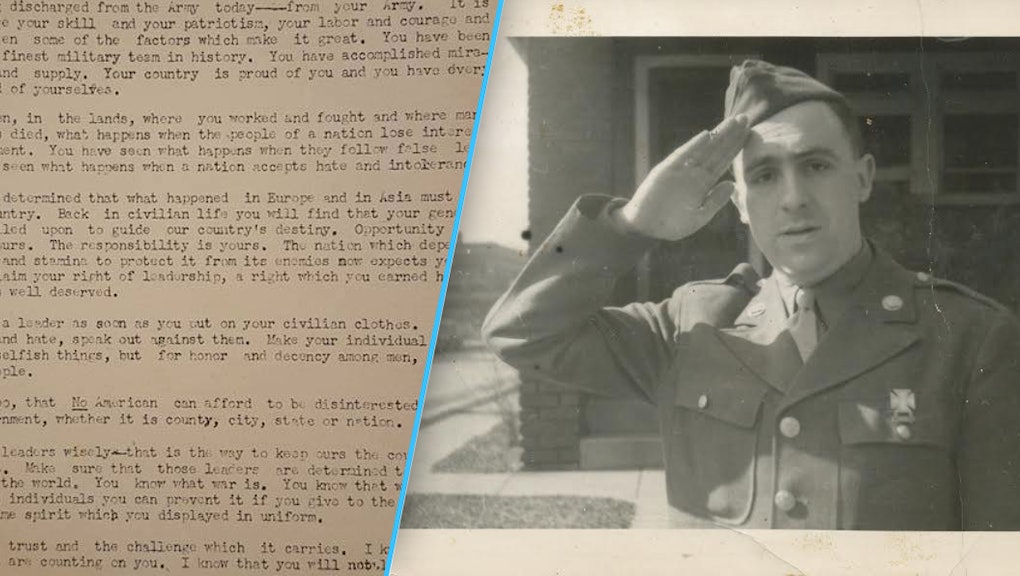 Beth Siegel was cleaning out her late father's papers in June when she stumbled upon a typewritten letter — and the words are perhaps even more relevant today than they they were in 1945.

Jacob "Jack" Siegel served as a first lieutenant in the Army Air Forces during WWII, and when he was discharged he was given the letter, which his family believes was only for officers. The text of it warns of the dangers of "false leaders" and "hate and intolerance."

Siegel's granddaughter, Emma Kornetsky recognized the eerie pertinence of the letter and posted it to Facebook. "The message resonates strongly today and is worth repeating," she wrote.

The letter warns that voting and engagement with both local and national politics are the only ways to protect the U.S. from "what happened in Europe and in Asia," and that "NO American can afford to be disinterested in any part of his government."

The letter also cautions those returning to civilian life to "choose your leaders wisely — that is the way to keep ours the country for which you fought. Make sure that those leaders are determined to maintain peace throughout the world. You know what war is. You know that we must not have another."

The letter seems especially meaningful in the midst of the chaos that is Republican nominee Donald Trump's campaign for president. This week it was reported that Trump, who has stirred up both hate and intolerance over the course of his campaign, asked a foreign policy expert why the U.S. couldn't just use nuclear weapons.

See the full text below:

You are being discharged from the Army today — from your Army. It is your Army because your skill and your patriotism, your labor and courage and devotion have been some of the factors which make it great. You have been a member of the finest military team in history. You have accomplished miracles in battle and supply. Your country is proud of you, and you have every right to be proud of yourselves.