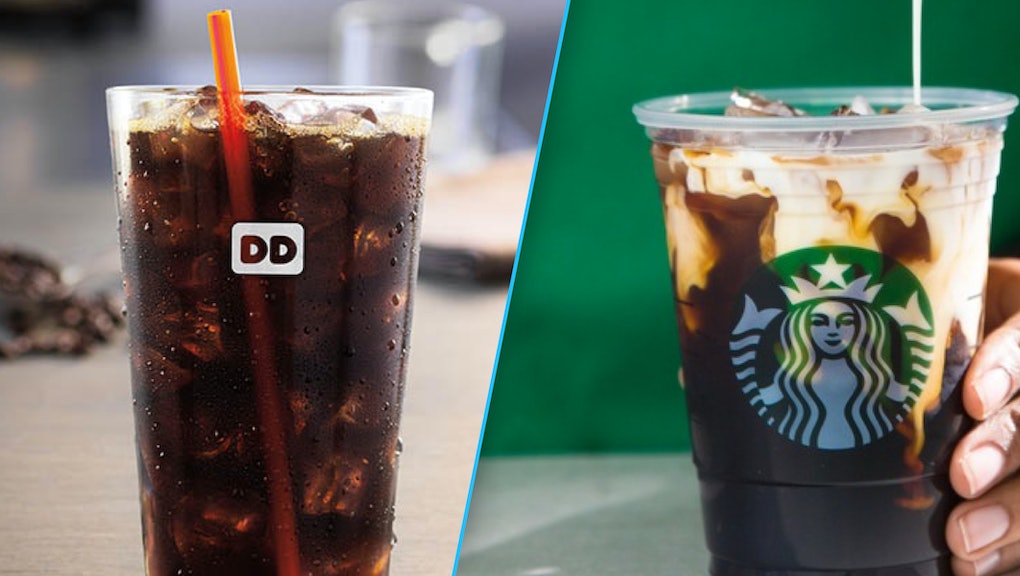 Starbucks vs. Dunkin' Donuts Cold Brew Coffee: Which Is Better?

For years, iced coffee was the caffeinated beverage of choice during hot summer months. But these days, cold brew is stealing the spotlight — and for good reason. The trendy drink is typically smoother and contains a higher caffeine count than regular iced coffee, as Mic previously reported.

So is it worth it?

Caffeine: 200 milligrams in a grande (16 fluid ounces) according to Starbucks

Dunkin' Donuts is clearly the better deal financially, but does it hold up in the taste department? We decided to find out by conducting a blind taste test at Mic headquarters.

How We Set Up the Taste Test

Coffee-loving Mic staffers took one cup of Dunkin' Donuts cold brew and one cup of Starbucks cold brew. Each cup had roughly 5 ounces. Testers were allowed to add sugar and milk however they preferred, and they immediately typed up their thoughts.

Starbucks was the clear favorite. One tester commented that the cold brew was "smooth, rich, almost chocolatey." Many remarked that the Starbucks brew tasted stronger and seemed more concentrated. Starbucks "was a bold, refreshing sip of flavorful coffee," noted one tester. Another tester wrote that it was "not overly bitter but it has a bit of a bitter aftertaste."

Though some testers found the Dunkin' brew to be weak, others preferred the more mellow taste and noted that it tasted like a lighter bean blend. "I could literally drink this all day; I prefer it," one tester said.

But more people were critical when it came to the Dunkin' Donuts brew: "[This] would be good for someone who doesn't like coffee," one person said. Another noted that the Dunkin' brew tasted more like iced coffee than cold brew.

Several testers noted they felt especially wired after tasting two 5-ounce cups of cold brew. One tester said she felt "shockingly energized considering I [probably] only had the equivalent of a small coffee."

With a vastly better price point and allegedly more caffeine, will America run on Dunkin' cold brew? Or will they prefer the stronger taste of Starbucks' brew? With roughly 20,000 Dunkin' Donuts locations and 24,000 Starbucks locations across the world, cold brew from either coffee shop is probably never too far from reach.