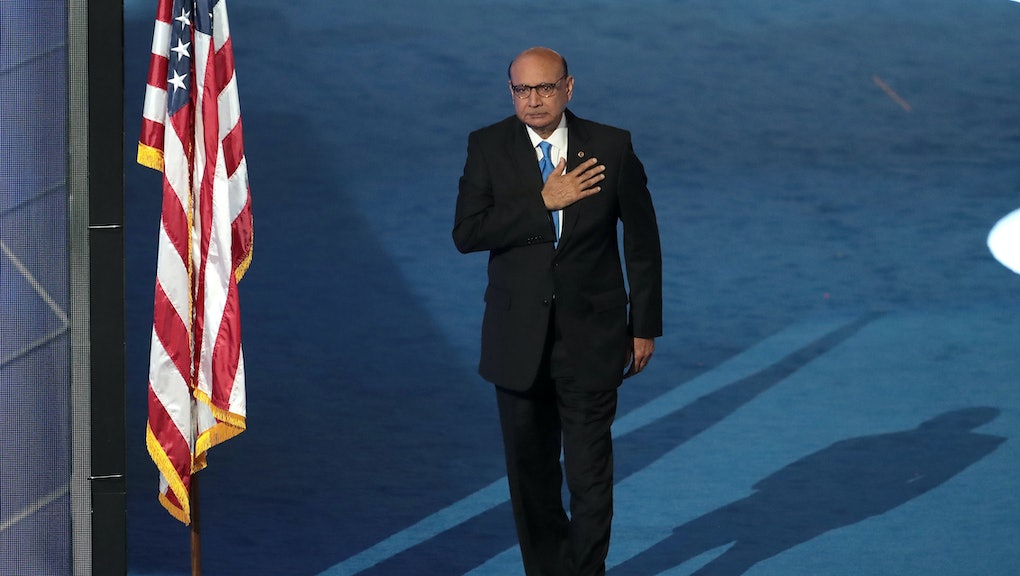 Yes We Khan: Activist Starts Fund to Draft Khizr Khan to Run for Office in Virginia

Khizr Khan's speech at last week's Democratic National Convention made him a political sensation and sent sales of pocket copies of the Constitution skyrocketing.

Now, donors on the fundraising site Crowdpac want to make Khan — father of a Muslim American Army captain killed while serving in Iraq — an elected official himself.

Tom Keefe, the veterans' activist who started the Crowdpac account, praised Khan for speaking out against Republican presidential nominee Donald Trump's anti-Muslim rhetoric in the name of his late son, Capt. Humayun Khan.

Keefe says the elder Khan's willingness to take on the GOP presidential hopeful shows he'd be a great public servant if he pursued an open seat in the Virginia House of Delegates. As he wrote in his just-launched Crowdpac appeal:

We need more candidates like Khizr Khan, not Donald Trump, to run for office in America. Mr. Khan is someone who has achieved the American Dream and made the ultimate sacrifice for this country. Donald Trump couldn't even name a single sacrifice he has made. Help draft Khizr Khan to run for state delegate in the 58th district in Virginia. He would be the first-ever Muslim American to hold this seat.

Keefe, who served in Vietnam with the Army and worked for the federal government during the Clinton administration, said he briefly met Khan while both were at the Democratic convention in Philadelphia.

The Crowdpac campaign, launched Tuesday, has raised more than $10,000 so far.

In keeping with its setup, Crowdpac will only charge donors the amounts they pledge if Khan, an attorney, actually runs. It's not clear that Khan would be interested in public office — even an open seat — but Keefe says that's not the actually the point.

"It's really less about Mr. Khan running for office and more about sending a message [that] I don't want somebody like Trump representing me," Keefe said in a phone interview Wednesday.

He slammed Trump as a thin-skinned "charlatan" who couldn't be trusted with vital decisions about national security.

Keefe, a retiree who has long been involved in Democratic politics, called the Manhattan real estate developer callous for his remarks — and not only those about the Khan family.

The former military policeman said Trump's offended him by calling his efforts to avoid contracting STIs on the dating scene his own "personal Vietnam," and Keefe also pointed to Trump's remarks about coveting the Purple Heart, which is awarded only to service members wounded in combat.

"I was very annoyed — and I still have friends who are members of the Military Order of the Purple Heart, and they're emailing me back and forth and they're livid," Keefe said.

Trump went to military school, but received multiple deferments that excused him from service in the Vietnam era.

The Khan family couldn't immediately be reached through the Clinton campaign Wednesday. A Trump campaign spokeswoman didn't respond to a request for comment.

Trump has pushed back against Khan's continuing criticism — which has included personal appeals to Senate Majority Leader Mitch McConnell and House Speaker Paul Ryan to disavow the Republican nominee.

The GOP nominee, who's made a very big deal of his love for veterans, has hailed the late Capt. Khan as a fallen hero, but has also said the Khans "viciously" attacked him for no good reason.