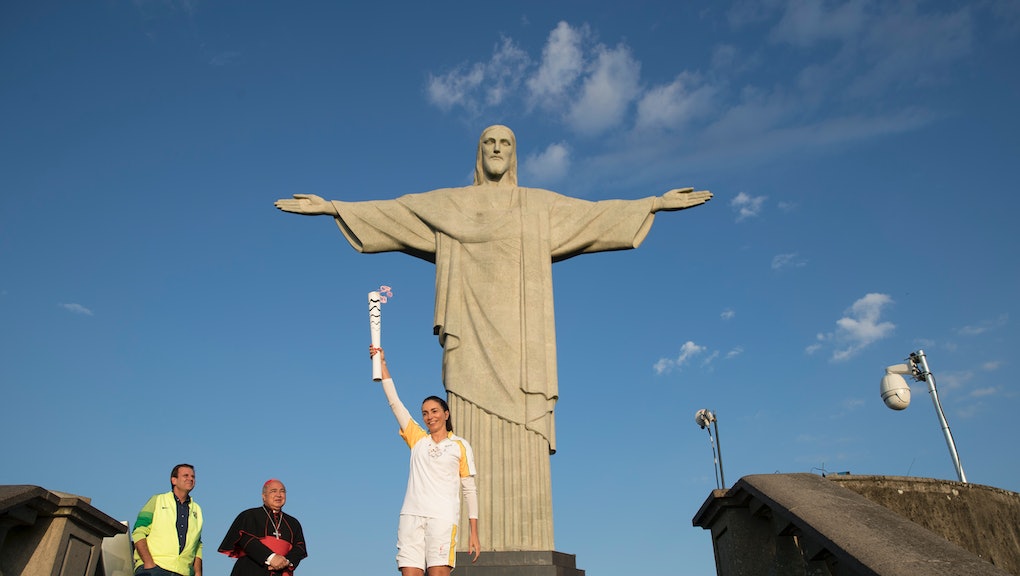 What Does the Olympic Torch Symbolize? Here's a Brief History of What the Torch Represents

Along with the Olympic rings, the Olympic Torch has become synonymous with the famous games. Whether it's the classic "Chariots of Fire" theme song that goes along with it, or the famous running by both celebrities and non-famous people towards the Olympic Stadium venue, the Olympics would not be the same without one of its most recognizable symbols.

At the original ancient games in Olympia, Greece, there was an altar of a sanctuary dedicated to the goddess Hestia that had a continuous flame. The flame was located in the Prytaneum, the building used for the large banquets held in honour of the athletes at the end of the Games.  The Olympic flame, however, would not come into existence in the modern era until the 1928 Amsterdam games. The fire was lit in a cauldron designed by Dutch architect Jan Wils.

Just as with the Olympic Rings, Carl Diem, under the watch of the Nazis for the 1936 Berlin Games, played a major part in the Olympic torch flame becoming more than the one in the Stadium's cauldron. Diem developed the torch relay system, a system where different people run around cities of the Olympic host's country and around the world with the torch until the flame reaches the Olympic Stadium during the Opening Ceremonies. The first global torch relay came in 2004 in celebration of the games returning to its sacred home. The torch traveled to Africa and South America for the first time and visited all the previous cities that hosted the games before arriving in Athens.

Besides running, the Olympic torch has been transported in many different ways throughout its history. Since the 1948 games in London, the Olympic Torch has traveled by boat. Airplane travel for the torch began in 1952 for Oslo games, along with Norwegian skiers playing a major part in getting the torch to its destination. For the Montreal games, the flame was remarkably transformed into a radio signal from Athens to a satellite at Canada's capital of Ottawa. Other transportation moves for the torch in its history have included a Native American canoe, a camel and even a Concorde airliner.

With the many issues surrounding these Rio Games, someone who was averse to them being in Brazil actually tried to extinguish the Olympic flame just a few weeks ago. He was unsuccessful in doing so, but the potential extinguisher represented many Brazilians upset over their country spending so much for the games (and the 2014 World Cup), but not living up to the many promises of improved infrastructure and public goods Brazil requires.

That wasn't the only attempt at trying to extinguish the flame. Back in 2008, the Olympic torch was actually extinguished before the Beijing Games on purpose in Paris, France in a bizarre incident that went viral.