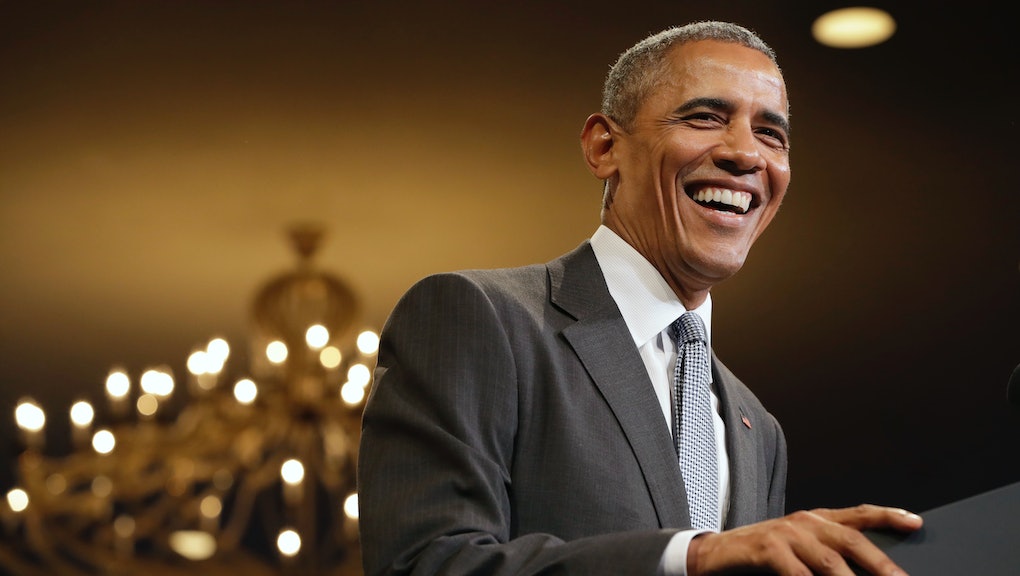 When Aug. 4 has rolled around for the last seven years, POTUS has often spent time at Camp David — as he did over the weekend with a few golf buddies.

But with less than 100 days left until Election Day, it's clearly time to give him a few parting gifts on his last birthday in the White House.

Take a look at a few things that Obama should put on a last-minute wish list.

Just look at these cuties.

Who wouldn't want this in a memory book?

OK, so we've heard him sing in church and at the Apollo, and on random moments over the last several years. He can further embarrass Malia and Sasha with a new karaoke machine. Someone cue up, "My President" by Young Jeezy.

Over the years, Obama has flexed his skills on the court — and even had the White House turn its tennis court into a part-tennis, part-basketball court. He'll likely have more time to go back to Chicago after January 2017, so why not spend a few of those nights court-side watching Dwyane Wade, another Chi-town baller, in the Windy City.

The reopening of Dixie Kitchen in Chicago

As a state senator, Obama reviewed this local eatery on Check, Please, a weekly local restaurant review show. But Dixie Kitchen closed in June 2009, shortly after Obama moved to the Washington. How about a one-night only opening for the president?

When the president visited Buenos Aires, Argentina, in March, he just couldn't stop talking about Yerba Mate tea. Might as well stock his cabinet with this stuff.

A keychain of a baby in a Popemobile

Obama fell in love with this Baby Pope on Halloween. A reminder of the joy he felt on that day would definitely brighten his day.

Obama made a big to-do about being able to keep his BlackBerry when he first became president. Since then, he's had to stick with it for security purposes. Perhaps it's time for him to try something new.

Former presidents receive several lifetime benefits, including medical treatment, under the Former Presidents Act. But Mr. Affordable Care Act should take advantage of his own statute.

A few hours at a hookah bar

Obama gave up cigarettes years ago, but a night out at a hookah bar could be fun for the former smoker. Just imagine Obama passing the hookah to Joe Biden.

A tour of the Yuengling brewery

If it's true that Obama's favorite beer in Yuengling, then POTUS should take a tour of America's oldest operating brewery.