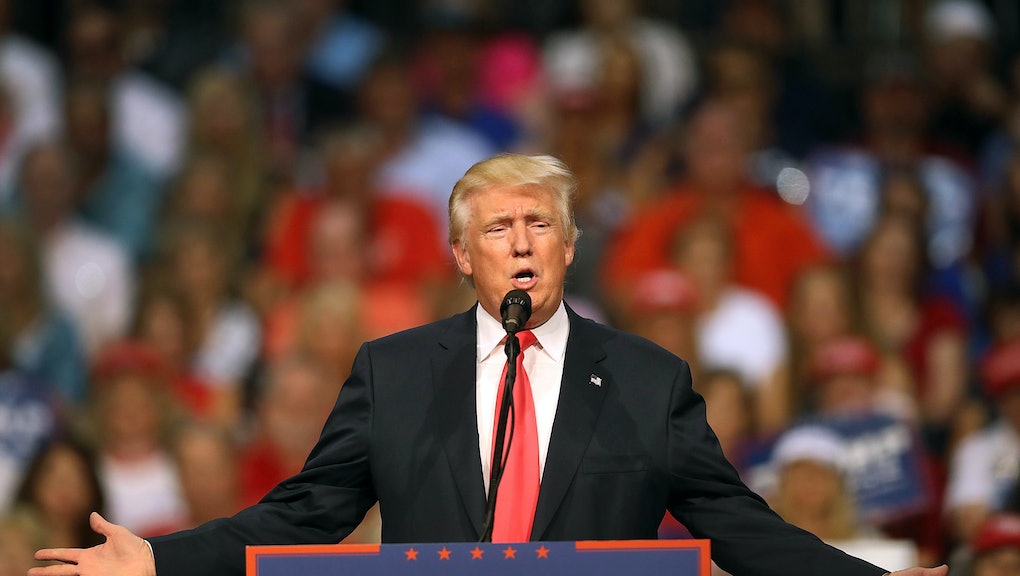 Republicans Are Trying to Pretend Donald Trump Came Out of Nowhere, But Come On

This week, Republican presidential nominee Donald Trump set off a wave of ridicule for publicly berating a mother and her crying child at one of his rallies in Virginia.

After initially telling the mother "Don't worry about that baby, I love babies!", Trump segued into a meaner punchline: "Actually, I was only kidding, you can get the baby out of here ... I think she really believed me that I love having a baby crying while I'm speaking."

The baby diss was one of several recent events fueling increasing Republican skepticism about their party's nominee, coming on the heels of bipartisan criticism of Trump's vile mockery of a Pakistani-American Gold Star family and shortly preceding a growing feud over Trump's refusal to back Republican Speaker of the House Paul Ryan for re-election. In the wake of the incidents, talk of GOP officials ditching the Trump ticket has grown, with President Barack Obama calling Trump unfit to succeed him in office and suggesting Republicans should withdraw their support.

It's not just a fad. The rise of Trumpism has resulted in several major shifts in the conservative landscape, ranging from Fox News contributor (and Obamacare target shooter) Erick Erickson praising Obama's speech at the DNC to major GOP foreign policy figures betting on hawkish Democratic nominee Hillary Clinton as the future of military interventionism.

A recent report in Bloomberg suggests the rift between Trump and party officials has grown so large Clinton's campaign sees a major opportunity to "target prominent Republicans who may be primed to defect and support the Democratic nominee."

Days before the baby incident, Joseph Rago of the Wall Street Journal's editorial board — a longstanding bellwether of mainstream Republican opinion — issued the paper's own jab against the nation's babies.

Rago disparaged Clinton's plans to increase access to family leave programs, "equal" pay for women and programs designed to limit the price of insurance and medicine, saying that her platform is "even more progressive than Mr. Obama's. Believe it or not, there are still subsidy gaps in the cradle-to-grave entitlement state, and this is a candidate who regularly talks about the programs she wants to create for 'ages 0 to 5.'"

According to recent statistics promoted by Obama's White House, the intent of early childhood intervention isn't to expand the welfare state, but put existing resources to better use. For example, the administration argues spending more money on early childhood education pays for itself by increasing future earnings. These kinds of projects entail expansion of government services, but aren't incompatible with the ostensible conservative ideal of efficient governance.

Mainstream conservatism as embodied by outlets like WSJ, however, differs from Trump's dismissive stance on issues like babies more in degree than kind. Mocking young citizens' needs as emblematic of a "cradle to grave entitlement state" makes perfect sense in a Republican Party that is arguably the most conservative it's been in a full century.

As the GOP drifted right, over the course of the past few decades, it also increasingly catered to conservative whites paranoid over demographic trends. In the process, the party also lent more and more of its political cache to anti-intellectual outlets like talk radio and spent much of its energy exploiting the economic and social anxieties of that mostly white, conservative base in a rapidly changing U.S.

The ugly, race-baiting rhetoric of the Trump campaign and its supporters is just 2016's notch on a years-long trend.

Far from being a purely Trump-related phenomenon, the Republican platform in 2016 is one of the most extreme in modern history, boasting everything from restrictions on abortion to demands the federal government remit land to the states. While Trump differs from conservatives in his party on spending, he nonetheless agrees with them on huge tax cuts which would disproportionately benefit the already wealthy. Much of the right-wing outrage driving his candidacy stems from Republicans' disillusionment with party leadership that makes sweeping promises — from repealing the Affordable Care Act to undoing most of Obama's accomplishments — yet has failed to deliver the promised Tea Party utopia due to the constraints of reality.

"They feel like they keep working and fighting to elect Republicans to get us back to a limited government approach to life, and all they get is more spending, more taxes and people who are afraid to fight liberal Democrats," conservative activist Greg Mueller told the L.A. Times.

"Conservative elites can denounce Trump all they want as a 'cancer' or an impostor," wrote the New Republic's Jeet Heer in February. "In truth, he is their true heir, the beneficiary of the policies the party has pursued for more than half a century."

The sentiment that gave rise to GOP nominee John McCain's vice presidential nominee Sarah Palin in 2008 and turned into the Tea Party revolution of the Obama years never went away, but primed the Republican Party for a candidate like Trump. Just this past May, an "overwhelming majority" of Republicans wanted key leaders like Ryan to back Trump — and while plenty of senior figures found excuses to skip this year's GOP convention, he ultimately seized that control.

What seems to have changed is not the GOP's knowledge of Trump's political views but a growing consensus that his ticket is doomed. After all, Trump advocated his most extreme policies, a border wall with Mexico and a ban on Muslim immigration to the U.S., well before he won the primary or the endorsement of key leaders like Ryan. Even as the candidate trampled on key Republican National Committee leaders' dreams of a more inclusive GOP, key party leaders and his squabbling primary opponents failed to unite against him.

Many of the few centrists left in the party, such as Hewlett-Packard CEO Meg Whitman and Rep. Richard Hanna, have endorsed Clinton instead.

While Trump's angry, racist tone and open flirtation with conspiracy theory reflect a uniquely troubling mindset, the most moderate Republican put in a competitive showing in 2016 was thoroughly conservative Ohio Gov. John Kasich. Any of the available alternatives to Trump would have run into a similar problem: The country hasn't gotten more conservative, just the GOP.

So while the real estate billionaire certainly brought upon himself the dire situation he now faces, Trump could become a scapegoat in a Republican Party still unwilling to admit a connection between the candidate's skyrocketing unpopularity and their own scoffing attitude toward funding babies' educations.

In fact, the loudest institutional voices against Trump's nomination have come from the conservative wing of the party — such as arch-conservative Texas Sen. Ted Cruz, an isolated voice against Trump at July's RNC and who is clearly aiming for his own 2020 presidential bid. It turns out this is the same wing of the party least likely to adapt to an electoral map less stacked in favor of white voters.

The panic over Trump's tanking campaign seems likely to grow in the weeks ahead. But if prominent Republicans finally find the temerity to deny Trump their support or bolt for Clinton entirely, they won't be able to escape the part they played in bringing this Frankenstein's monster to life.