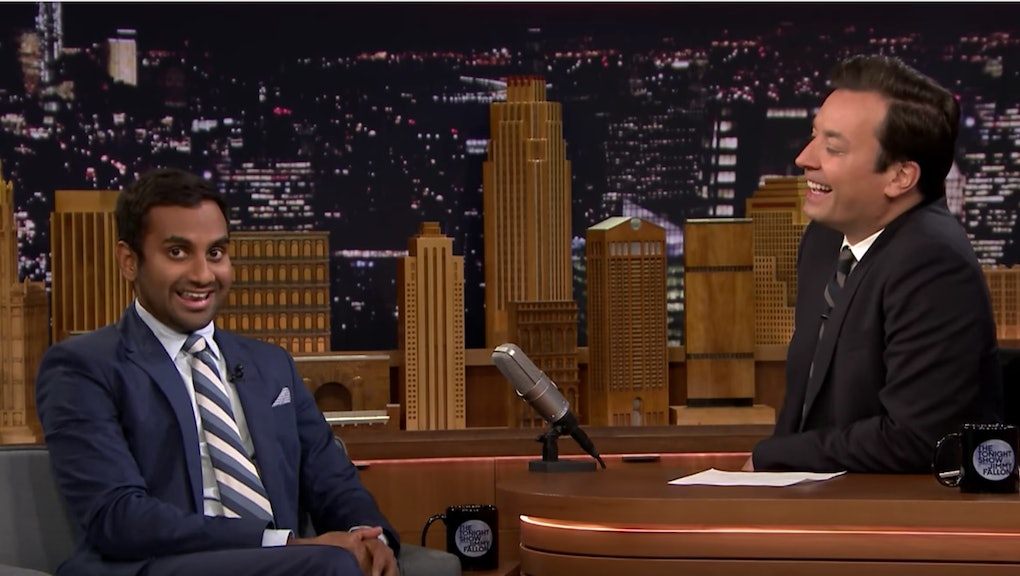 Donald Trump is no stranger to feuds — just ask Rosie O'Donnell — but the real estate mogul might've met his match when he tried to take on the Khan family. It all started when Trump responded to father of fallen Army Capt. Humayun Khan Khizr Khan's remarks at the 2016 Democratic National Convention.

In light of Trump's proposal to temporarily ban Muslims from entering the United States, Khan posited that Trump hasn't even read the U.S. Constitution — to which Trump had a much-maligned response that implied Khan's wife, Ghazala, wasn't "allowed" to speak. The weak retort reminded comedian Aziz Ansari of another feud that's hit the national spotlight — with similarly uneven results.

On Wednesday's episode of The Tonight Show with Jimmy Fallon, Ansari noted that the Khan-Trump feud bears likeness to the ongoing drama between Drake and Meek Mill — one Drake is resoundingly winning.

"I mean, it's crazy," Ansari said. "The guy makes the speech like, 'Have you read the Constitution? Let me give you a copy!' Then Trump is like, 'Why doesn't your wife say anything?' And then the guy goes, 'You have a black soul,' which is the coldest shit I've ever heard. ... I heard that was gonna be a line in Tupac's 'Hit 'Em Up,' but he was like 'Nah, nah, it's too mean, we can't go there.'"

Ansari, for his part, is no stranger to criticizing Trump, penning an op-ed for the New York Times in June condemning the GOP candidate's assertion that banning Muslims from America would inherently make the country safer.

Clearly, whether it's the Ansari or the Khan family, Trump's hate-filled rhetoric is going to be ruthlessly shut down. Watch Ansari's reaction to the Khan-Trump feud below.