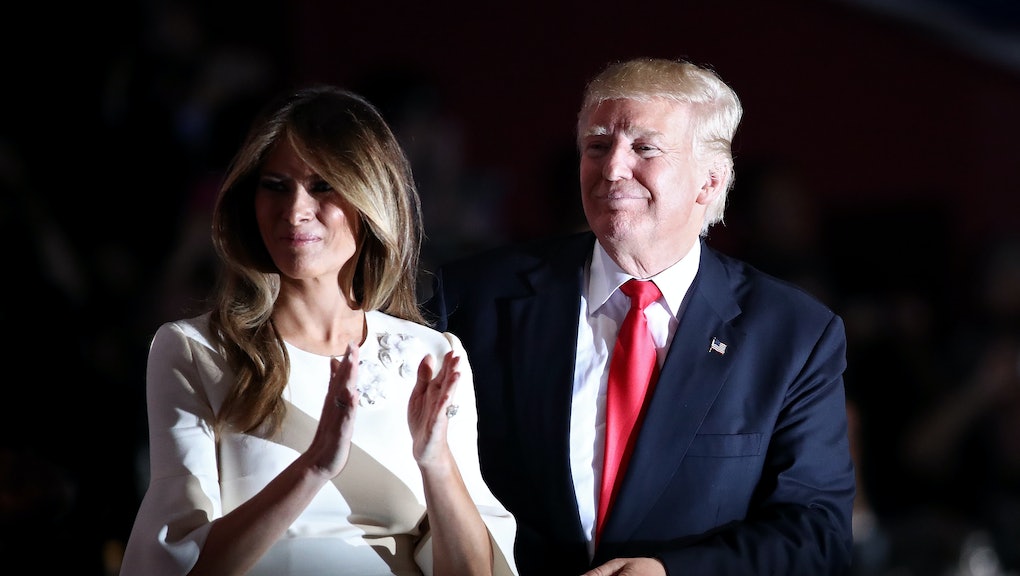 Donald Trump's tough talk on immigration restrictions played a huge part in how he captured the Republican nomination for president.

But a new Politico report suggests Trump's own wife, Melania, may have gamed the system on her road to U.S. citizenship.

Melania Trump denied the report in a tweet Thursday morning.

Nude photos that surfaced this week of the aspiring young model posing with another woman in 1996 sparked the new questions about inconsistencies in the story of how the prospective first lady lived and worked in the United States early in her career.

Melania Trump proudly spoke of her journey from Slovenia to America during a controversial address at the Republican National Convention in Cleveland that resulted in accusations of plagiarism.

But a cascade of investigative reports, including the Politico piece that dropped early Thursday morning, suggest the former cover girl's accounts of having traveled back and forth between her birth country and the U.S. to comply with immigration law may not stack up.

While Trump and her husband, Republican presidential nominee Donald Trump, have said she came to the United States legally, her own statements suggest she first came to the country on a short-term visa that would not have authorized her to work as a model. Trump has also said she came to New York in 1996, but the nude photo shoot places her in the United States in 1995, as does a biography published in February by Slovenian journalists.

In short, Melania Trump has said in repeated interviews that she would return to Slovenia periodically before becoming a citizen to renew her paperwork for time in the U.S.

In a tweet Thursday, the GOP nominee's wife defended herself as having cleaved to all laws regarding her immigration status:

However, traveling back and forth between America and Europe, as Melania Trump described in interviews, wouldn't have been standard practice for someone in the U.S. on a H-1B visa, "even if it was the lesser-known H-1B visa specifically designed for models," Politico reported, citing experts in immigration law.

Instead, that sounds more like what someone would do if they held a B-1 Temporary Business Visitor Visa or B-2 Tourist Visa, the story said.

Using either of those visas to pursue work in the United States, experts said, could constitute fraud — and even bring into question Melania Trump's current citizenship, which she obtained in 2006 after getting a green card in 2001.

Donald Trump, whose own mother was a Scottish immigrant, has proposed cutting off access to the U.S. to Muslims in the name of national security — a concept roundly dismissed as unconstitutional and infeasible.

What's more, he's also spoken out against exploitation of H-1B visas — the very type that would have allowed his now wife to pursue her modeling career in New York before becoming a citizen.

Donald Trump's family has been a major part of the campaign's attempt to soften and shape his image for the public in his general election battle against Democrat Hillary Clinton.

The latest controversies about his wife are probably not the kind of messages he or the Republican Party are hoping to advance in that fight.