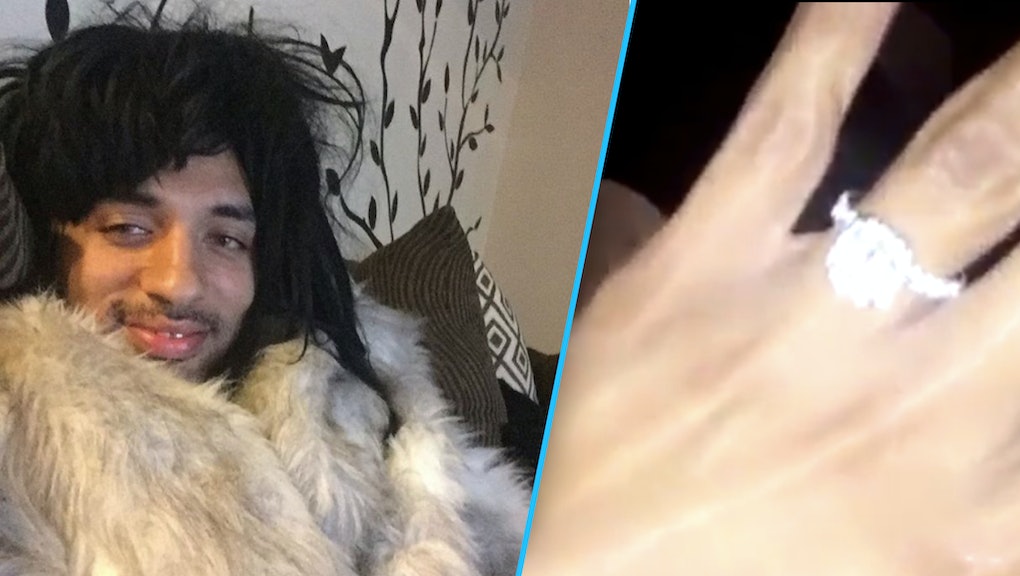 Joanne the Scammer Helped a Man Propose to His Girlfriend and It's Truly, Honestly Iconic

Joanne the Scammer's latest heist is, truly, honestly, her most successful and heartwarming yet.

Although the internet's favorite con artist is best known for her elaborate scams, on Wednesday she decided to take a break from petty theft and being problematic to help a man propose to his girlfriend. Generous!

In a video posted to Twitter, Joanne (the creation of Miami-based Branden Miller, who tweets as @JoannePrada), addresses a woman named Crystal in her signature drama-filled style, explaining that she performed her latest heist alongside a man named Clyde — who used his share of the "stolen" cash to purchase a ring.

"What do you think he's going to ask?" Joanne asks Crystal.

According to the user who uploaded the video, who uses the handle @kushNdiamonds, Clyde and Crystal are her parents, who have recently gotten back together after a 5-year separation.

The user also uploaded footage of her mother watching Joanne's message, experiencing what can probably be safely assumed to be the most confusing maelstrom of tears, joy and laughter a human being is capable of experiencing.

She also uploaded a nice shot of the ring itself and it is truly, honestly stunning. Honestly.

Thanks to Joanne, this happy couple is back together — and Bank of America is probably a few thousand dollars poorer.