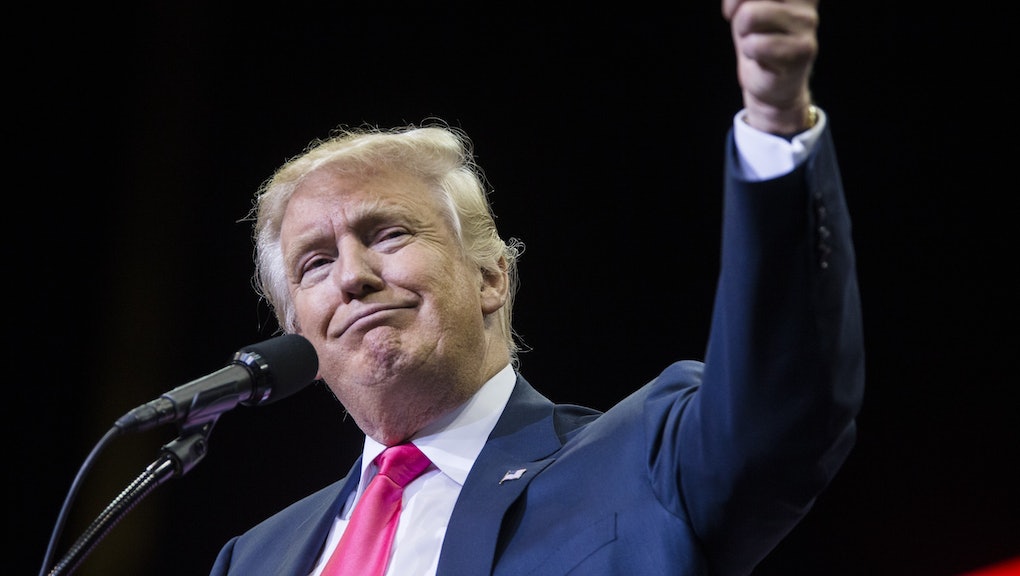 As Donald Trump Plunges in the Polls, Democrats Warn Against Complacency

An air of cautious optimism is sweeping through Democratic circles this week, as Donald Trump's poll numbers plummet following a gaffe-filled 10-day mess of the Republican presidential nominee's own doing.

But even as Hillary Clinton now holds a comfortable lead both in national and swing-state polling, Democrats are warning one another not to get too comfortable.

With more than three months to go — an eternity in politics — the state of play can change in an instant. And Democrats are cautioning against the kind of gleefulness that could cause complacency among the donor and activist class.

"We've seen polling where Donald Trump is ahead of Hillary nationally right after the RNC. So the fact of the matter is there is a structure in the country that is inclined to vote for Trump and not Hillary," said Michael Trujillo, a California Democrat and longtime Clinton supporter. "So if we've seen those numbers before. ... Why are we all of a sudden super-confident 14 days later?"

Tom Bowen, a Democratic strategist from Illinois, added that while Democrats are unlikely to get in the way of Trump's "train wreck," there's no Democratic operative who is already "writing this off as a win."

"Everybody, I think, understands that he is a different animal than we've ever experienced," Bowen said. "And he's actually so dangerous as a human being, and for the country's future, that I think most people are going to run harder against him than we have in the past."

For these strategists, that means registering more Democratic voters, continuing to build a field operation to turn people out on Election Day, and making sure the party finds a unified message to stick to Trump and other Republicans in down-ticket Senate, House and state government races.

They added that polling could be volatile until a few weeks out from Election Day. And only in the final weeks of the race will they feel confident, assuming Clinton holds her lead.

Yet as certain Democrats are feeling increasingly optimistic about Clinton's shot in November, Republicans are starting to panic.

A handful of Republicans are hoping Trump drops out of the race, allowing the GOP to replace him with a more electable alternative — an unlikely scenario.

And other Republicans elected officials are jumping ship as Trump's numbers crater.

Rep. Adam Kinzinger, an Illinois Republican in a safe GOP seat, told CNN he can't see himself voting for Trump this fall.

"I don't see how I get there anymore," Kinzinger, a veteran and rising star in the Republican Party, told Wolf Blitzer. "I'm not going to support Hillary, but in America we have a right to write somebody in ... and that's what it's looking like for me."

Rep. Mike Coffman, who represents a swing district in Colorado, is already on air with an ad distancing himself from Trump — a move politicians often make when polling shows their nominee is having a toxic impact on their own re-election chances.

"People ask me, 'What do you think about Trump?' Honestly, I don't care for him much, and I certainly don't trust Hillary," Coffman says in the ad. "I'm a Marine. For me, country comes first. My duty is always to you. So if Donald Trump is president, I'll stand up to him, plain and simple."

Still, many Democrats believe the race will be close in November — and say increased political polarization could keep the number of #NeverTrump-ers low.

"Listen, I would much rather be in our place than their place," veteran Florida Democratic strategist Steve Schale said. "But for me, there's still 95 days to go. There's a lot of time for people to find the justification in their mind to go back and [vote for Trump]. I would love to be proven wrong on this one, but I don't think we're wired in to have a landslide anymore."