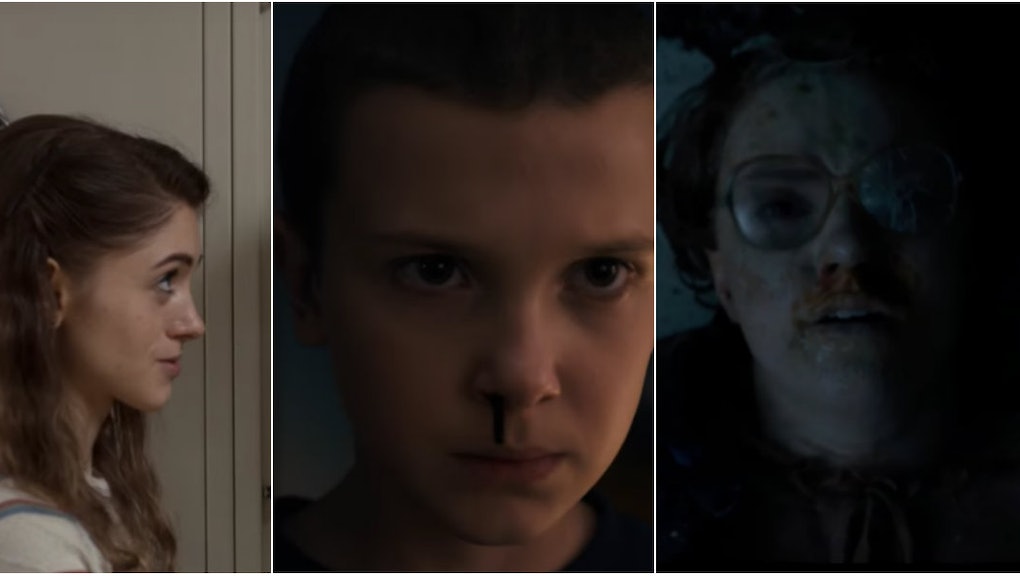 The Netflix show Stranger Things is many things: weird, creepy, a retro throwback to 1980s children's movies like The Goonies and Stand By Me, a way to convince young women they'd look badass with shaved heads. (NB: You probably won't.)

However, one thing Stranger Things is not is particularly feminist, even though various media outlets have described it as such.

Although the show has been lauded for its portrayal of strong female characters, from Winona Ryder's grieving mom Joyce Byers to de facto gay icon Barb, Stranger Things is actually fairly regressive in terms of its depiction of women.

Considering that Stranger Things is set in 1983 — the era of the "Just Say No" anti-drug campaign, Reagonomics and when people truly didn't think ALF's nose looked like a dick — it makes sense that the show would harbor somewhat conservative views of women. Here are just a few reasons why the Netflix show has more in common with the politically conservative decade that inspired it than we might think.

Although Nancy starts out dating (and losing her virginity to) Steve, over the course of the series a budding relationship between Nancy and Jonathan evolves. This is despite the fact that, at one point, Jonathan took photos of Nancy naked without her knowledge, a federal crime in most states that the show appears to view as a starry-eyed youthful indiscretion. While there's clearly some mutual attraction between the two, by the end of the series Nancy opts for the more popular and conventionally handsome Steve.

In an interview with Variety, show co-creator Matt Duffer said the decision to reunite Nancy and Steve was intentional: "It felt almost more real to us that she would wind up back with Steve, this heartthrob who she's had a crush on for a long time. It's surprising, but it felt more honest," he said. However, that Duffer doesn't explain is why Nancy's character arc needed to revolve around a love triangle to begin with.

Nancy Wheeler is not a weak character: She's kind to Jonathan when her friends bully him, surprisingly perceptive when she calls out the hypocrisy of her parents' marriage and pretty damn good at shooting a gun. There's no reason for who she does, or doesn't, end up with to be the defining feature of her character. Yet by teasing the "will they or won't they?" aspect of her relationship with Jonathan throughout the series, only to have her end up with an even shittier dude, that's exactly what Stranger Things does.

2) The slut-shaming of Carol and Tommy.

First, they've been sexing on one another since middle school, as Barb disdainfully says. Second, they like to partake in some occasional light slut-shaming, as their bullying of Nancy proves. And third, Tommy looks a little bit like a more well-fed Eddie Redmayne, which is to say he looks like a carrot bobbing in a glass of milk. And that's about it.

Considering how Nancy is almost immediately punished and slut-shamed for losing her virginity, the fact that the other two sexually active teenage characters are such assholes says an awful lot about how the show's creators feel about teenage premarital sex. Thanks, Stranger Things: teens who have sex are either sluts, or popular assholes. Got it.

3) The over-reliance on the tired "grieving mom" trope.

Joyce Byers, girl, I get why you so sad. I do. You're poor. Your ex-husband is a prick. Your older son is a weirdo. And your youngest son was abducted by a giant vagina-faced stick monster, and you can only communicate with him via Walmart Christmas lights and a janky DIY Ouija board. That's not good! Your life ain't great.

That said, literally 95% of the scenes you appear in consist of you chain-smoking and fluttering your hands while screaming "I just want my son back." Bitch, we know you want your goddamn son back. It's basically the defining trait of your character, well, that and your apparent allergy to under-eye concealer. Considering that you're considered one of the strongest female characters on the show, your lack of character development is somewhat problematic.

4) Eleven can kill the hell out of people...but she cares more about looking pretty for the boys instead.

Child actor Millie Brown has been applauded for her portrayal of the telekinetic child Eleven, and rightfully so: With her predilection for hoarding Eggo waffles, flipping vans, breaking people's GODDAMN NECKS WITH HER MIND and making schoolyard bullies piss in their pants, she's easily the most badass character of the series.

And yet, even Eleven has an Achilles heel: Despite her ability to save idiot 11-year-olds from falling off cliffs and her power to, once again, BREAK PEOPLE'S GODDAMN NECKS WITH HER GODDAMN MIND, all Eleven really wants to do is put on a powderpuff pink crinoline dress and look purdy for Mike.

Throughout the series, Eleven has an odd obsession with being "pretty."  Part of this can be attributed to the fact that she's been living in a laboratory for years, thereby skipping the part of female adolescence that entails practicing kissing on your pillow and unwittingly having your first orgasm at horseback riding camp. But still! Considering she's on the run from the creepy Dr. Brenner, and considering, once again, that she has the power to BREAK PEOPLE'S GODDAMN NECKS WITH HER GODDAMN MIND, you'd think that her first priority wouldn't necessarily be donning a third-rate weave that would've given any contestant on RuPaul's Drag Race a heart attack. Just look at that thing. Even Jinkx Monsoon wouldn't be caught dead with that on her head.

For whatever reason, the zaftig, freckled Barb (played by Shannon Purser) has emerged as one of the most memorable characters of the show, despite the fact that her screen time is limited to slut-shaming the popular kids and being bad at shotgunning a beer at Steve's house. Also, dying: Barb is dragged down to the Upside Down and slaughtered by the monster during the show's second episode, making her Stranger Things' first official casualty.

While the Duffer brothers themselves have expressed their remorse over having to kill off Barb in an interview with Variety, it makes sense why the character had to die. Aside from being a total bummer, the show needed to kill off one other cast member to prove just how dangerous the monster from the Upside Down really is. There's just one problem with Barb's death, though: Nobody really seems to give a fuck about her. Like, at all.

While the town remains consumed with chasing down Will Byers' murderer, no one, least of all Barb's mom, who places one concerned phone call to Nancy before being like "lol sayonara to that bitch anyway, Imma book a trip to Barbados and get my groove back like Stella," seems to care an iota for her well-being.

Even when it becomes apparent that the monster has killed Barb, when Eleven locates her body in the Upside Down, no one seems to care that much, with the possible exception of Nancy, who seems to be suffering from a minor form of post-traumatic stress disorder, but who cares now that cute lil' Will Byers is back!

The show's utterly flippant treatment of Barb and her death is a reflection of how little it seems to care about its female characters in general. In Hawkins, Indiana, women are of little value: They're either ignored, as Joyce is when she says the dead body at the morgue doesn't belong to that of her son, which is kind of a big deal in the dead-body-identification industry, slut-shamed, as Nancy is by the dreaded Carol and Tommy, or completely erased altogether.