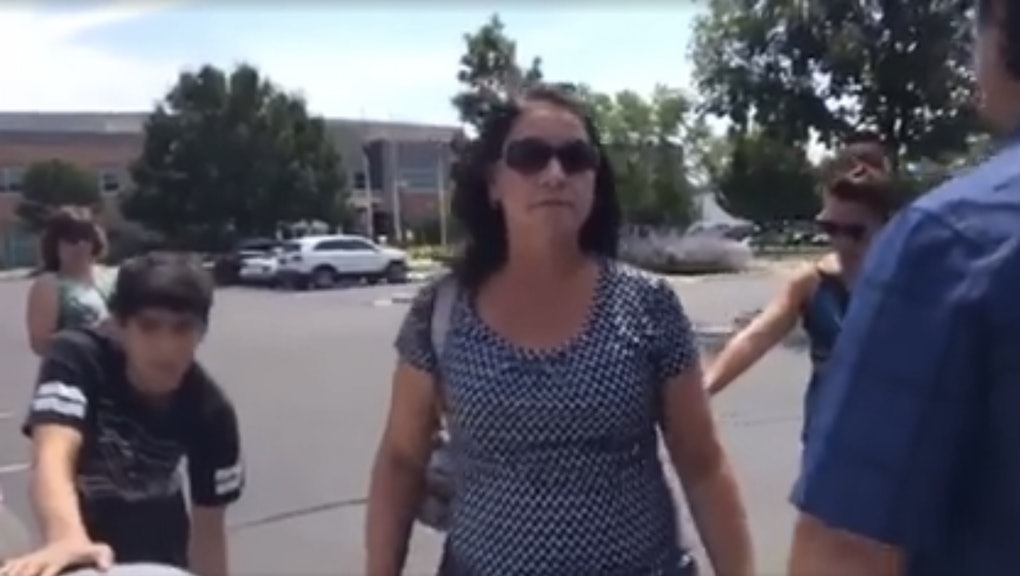 On Monday, Facebook user Wendy Flores posted a video of a group of women harassing her family in a parking lot in Grand Junction, Colorado.

The disturbing video was recorded by Flores' mother, Yolanda, according to the Daily Sentinel. Yolanda had reportedly gone to the Mesa County Health Department with her 6-year-old granddaughter and 14-year-old son Ahmed so he could get a physical for his high school football team. When they were in the building, they left their dog in the car with the windows rolled up. It was a decision they regretted after the fact, the Sentinel reported — but certainly not one that warranted the racist onslaught that followed.

When the family emerged from the building, the three women shown in the video were reportedly waiting by the Flores' car — having already called the local animal services — and proceeded to berate them.

"You're the ones that give brown people a bad name," one of the three women says in the video. Gesturing to the building, she adds, "You just want to fucking get something for nothing. Get your ass a job if you don't have one."

When Yolanda says in Spanish that it's her right to record them, the woman snaps her fingers at the camera and says, "Speak English, bitch. It's America." She challenges Yolanda to upload the video to YouTube, shaking her fist in the air and exclaiming, "Down with Mexicans that don't learn the language of the world." The woman behind her says the video will "educate everyone about how stupid you really are," referring to Yolanda.

By this point, both Ahmed and Yolanda's 6-year-old granddaughter are crying.

"My parents have sacrificed so much so much for us and it breaks my heart the way they get treated because of their broken English," Flores wrote in the Monday Facebook post where she shared the video her mother recorded. "I know they can speak English. And I know my mother understood every single word they said."

The women's xenophobic comments arrive amid an election season boiling over with anti-immigration sentiments from Republican nominee Donald Trump, who has referred to Mexican people as rapists and criminals and promised repeatedly to build a wall to keep them out.

"America is a diverse country," Flores wrote. "And that's what makes it such a wonderful place to be a part of. We are all human beings trying to survive. Remember that next time you are trying to bring yourself up by putting someone down."