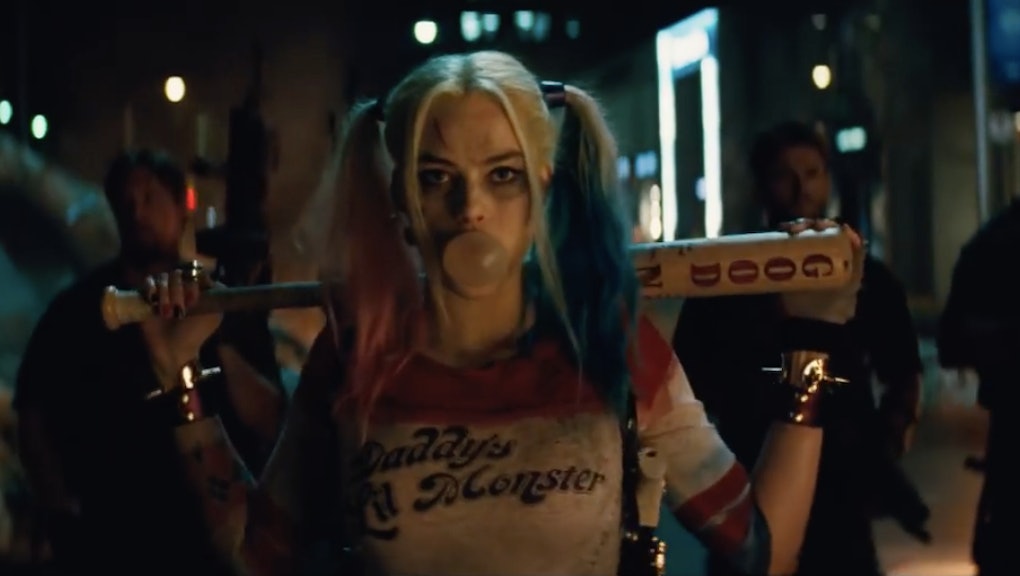 The camera often lingers on her hot pants-clad butt, accentuated by her impractically high heels. Often, the film tries to play off its sexual exploitation of Robbie as empowering. In one scene, an incarcerated Quinn tells the prison guard, "I sleep where I want, when I want, with who I want," while licking the bars of her cell.

Yet despite blatantly objectifying Quinn, the movie does offer glimpses of what could have been a more nuanced character, in the hands of defter filmmakers. In effect, the film directly challenges stereotypes about women in abusive relationships.

When the Joker's girlfriend, known by her clownish alter ego first made an appearance in Batman cartoons in the early 1990s, she represented the quintessential crazy lovesick woman in an abusive relationship. She was jealous and submissive to the point of infantilizing herself, often begging for approval from "Mr. J" in a childlike voice. She was also completely smitten by the Joker, no matter how much he physically abused her.

Quinn was supposed to be a one-off character, but fans were smitten. So comic book writers stepped up to fill in her backstory: Dr. Harleen Quinzel fell in love with her psychotic patient, the Joker, at Arkham Asylum. She was a type of character readers had never seen before: a bisexual, Jewish gymnast with a penchant for weaponry.

Although old-school cartoons and comics often attributed Quinn's defining moments to the Joker's manipulation rather than her own choices, Suicide Squad deliberately showed Quinn as the active agent in her transformation from doctor to villainous crime queen.

"I can take it," she quips when the Joker ties her down and promises pain. Later, the Joker tells her, "desire becomes surrender, surrender becomes power," which inspires Quinn to jump into a vat of dangerous chemicals on her own accord while the Joker walks away.

The scene subverts expectations implied by the trailer that the Joker pushes Quinn in and bleaches her skin, thus lending the villain her trademark look. Instead, Quinn jumps in herself, making a choice to be the submissive in a sexual power game. Her relationship with the Joker is unhealthy and obsessive, but she's deciding to tie herself to him of her own volition.

Although the film fails to explore the complexity of Quinn's psychology and her abusive relationship with the Joker, such moments offer tantalizing glimpses of what could have been. Instead, the movie tries to sanitize the historically abusive relationship by removing the Joker's beatings, dressing it up in sexy confidence and leaving the unhealthy power dynamic intact.

Despite the film's failings and its frequent lurid, unnecessary shots of Quinn in hot pants, momentary glimmers of Quinn's agency are Suicide Squad's silver lining. Quinn is not weak, malleable or oblivious, per most stereotypes of domestic abuse victims — she's the opposite. She's goofy, playful, athletic, confident in her sex appeal and highly skilled in all kinds of combat.

All of this doesn't mean Suicide Squad a good movie, or that it's kosher to paint domestic violence survivors as complicit in their own mistreatment — but the role does complicate the narrative audiences are typically fed about domestic abuse.

"I'm bothered by the knee jerk assumption that depicting Quinn as sexy, or confident, or in any way aspirational is tantamount to condoning, or even celebrating, the abusive romance that's a central part of her story," abuse survivor Lux Alptraum wrote for Fusion. "In real life, many of the women who find themselves in abusive relationships are confident and compelling and even people you might consider to be role models."

In this sense, the film's version of Quinn is more reminiscent of her development in fan fiction, in which writers dug deeper and turned the original "good girl turned bad" victim narrative on its head.

"Harley Quinn fan fics portray her transformation from shrink to harlequin positively — not as a catastrophic psychological breakdown, but as a liberation," researcher Kate Roddy wrote.

Over the years, Quinn has become Gotham City's infamous feminist icon, shooting cat-callers with her friend and future girlfriend Poison Ivy. She leaves the Joker behind and then embarks on her own comic book adventures, in which she explicitly identifies as an abuse survivor. Unfortunately, we only see flashes of that sassy, dark-hearted woman in this new movie.

Suicide Squad paints a portrait of a super-villain who has agency and takes control of her own choices. "Own it!" she yells while calling out her fellow villains, in a speech about how everyone sees the Suicide Squad as the "bad guys," no matter what they do with their powers. And when she says, "own it," she's also referring to herself.

Even after Quinn thinks the Joker is gone forever, her alter ego remains intact throughout Suicide Squad. She's a super-villain in her own right, not just a sidekick whose persona is defined by a male partner.

It's important to see onscreen examples of powerful women who survive abuse, grapple with their own choices and emerge with a sense of their own sexuality. There are already rumors of Quinn getting her own solo movie, which will hopefully feature Quinn as a feminist powerhouse — provided she isn't paraded across the screen to satisfy the male gaze.

As long as Quinn gets the last laugh in the next superhero flick, audiences might forgive this big budget flop.