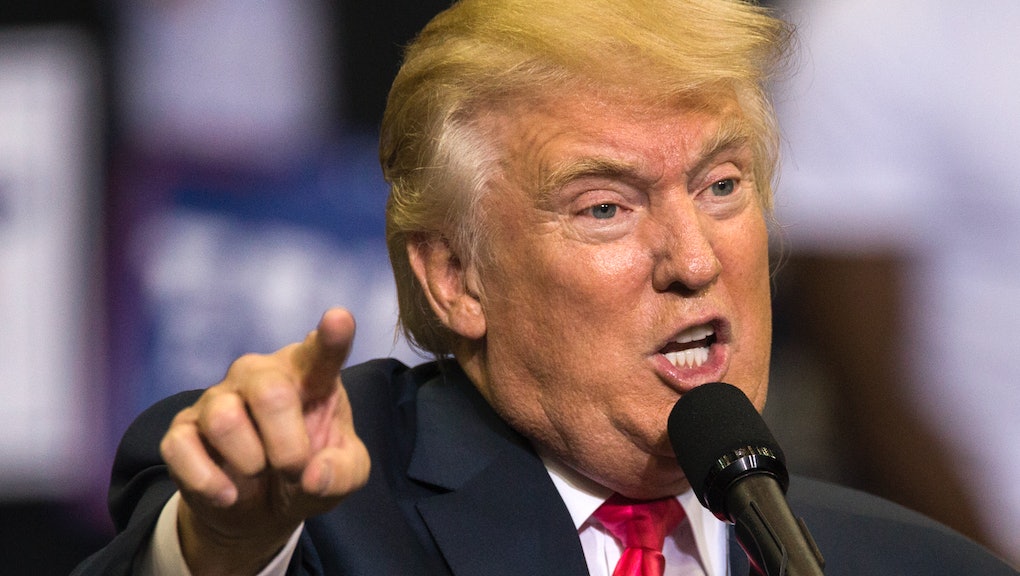 Republican presidential nominee Donald Trump once again said Thursday he saw a video of a $400 million cash transfer to Iran, a video his own campaign admits does not exist — seemingly perpetuating a lie and once again bungling a narrative he could have used to play offense against Hillary Clinton.

"It was interesting because a tape was made," Trump says of a nonexistent video of an unmarked plane dropping $400 million in Iran, reportedly at the same time Iran released four U.S. hostages. "You saw that with the airplane coming in — nice plane — the airplane coming in and the money coming off, I guess. Right?"

Trump first said he saw the "top secret" video, which he claimed Iran released to embarrass the U.S., during a rally in Daytona Beach, Florida, on Wednesday.

"Remember this: Iran — I don't think you heard this anywhere but here — Iran provided all of that footage, the tape of taking that money off the airplane," Trump said at the campaign event. "Right?"

The U.S. did airlift $400 million in cash to Iran in January, around the same time that Iran released the American hostages, the Wall Street Journal reported. Though the payment was part of a $1.7 billion settlement reached between the two countries, the Justice Department warned against delivering the cash to Iran as hostages were being released, fearing it would look like a "ransom payment."

At any rate, U.S. officials involved in Iranian negotiations told the Associated Press they were unaware of any video of the cash transfer.

And even his campaign said he was confusing b-roll footage played on Fox News of the four hostages being released.

Still, Trump repeated the claim again on Thursday in Maine.

"You know why the tape was given to us?" Trump said Thursday. "Because they want to embarrass our country."

Television stations covering the rally were quick to point out that no such video existed, despite Trump again repeating the claim.

Trump's claim of seeing a video wasn't the only incorrect claim he made during his speech in Maine.

He also said that neighbors had seen bombs in the apartment of the two people who shot and killed 14 people in San Bernardino, California, last year, despite there being no evidence anyone saw bombs.