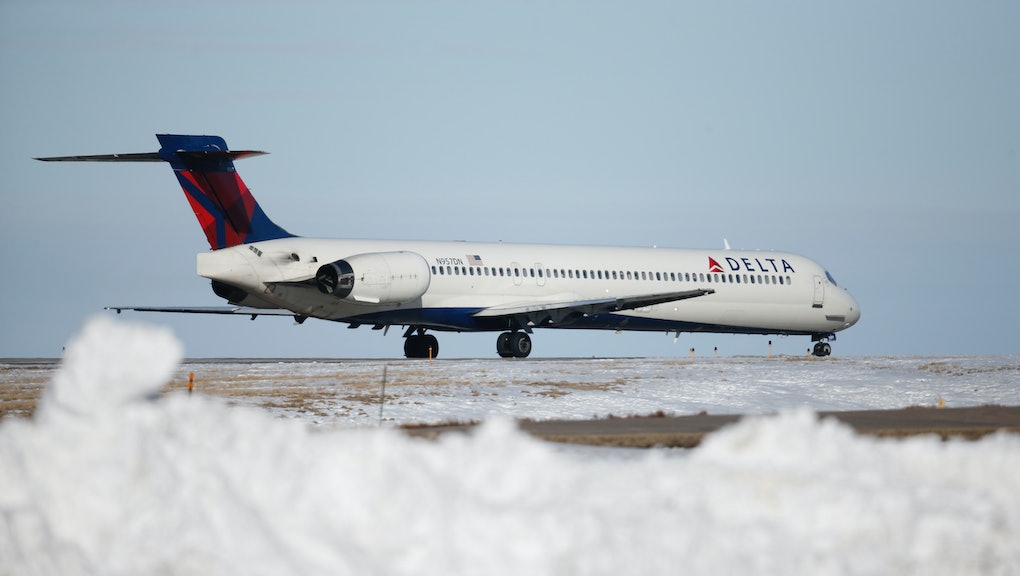 A Muslim couple was removed from a Delta Airlines flight from Paris to Cincinnati, Ohio, for allegedly saying "God" in Arabic, the Cincinnati Enquirer reported.

Faisal and Nazia Ali were in Paris celebrating their 10th wedding anniversary, and while boarding a flight to return home to their three children, a flight crew member had them ejected from the flight.

The flight crew member felt "uncomfortable" because the woman was wearing a headscarf and the man was sweating, the Enquirer reported. She also claimed that Faisal Ali was murmuring "Allah."

"Allah" is the direct Arabic translation for God. Arab Christians and Muslims alike use the word when referring to the higher being.

According to the Enquirer, the pilot on board of the Delta Airlines flight would not take off until the couple was ejected from the plane.

Other Muslim passengers were singled out and questioned on the Delta Airlines plane.

As the couple was escorted from the plane, they noticed other visibly Muslim female passengers at the rear end of the plane aggressively interrogated by a French security official, Nazia told reporters at a Thursday press conference at the Council of American Islamic Relations' Cincinnati offices.

"He said, `How long were you here?' We said, `Two days,' " Nazia Ali said in the press conference, according to the Enquirer.

The security official also asked about where they stayed in Paris and snapped pictures of their passports with his cellphone.

CAIR-Cincinnati announced that they will be sending a letter of complaint to the Department of Transportation's Aviation Consumer Protection Division. Attorney Sana Hassan, who filed the complaint and is representing the couple, wrote that Delta Airlines broke federal law by discriminating against the Alis, who are both U.S. citizens.

Hassan also wants the airlines company to establish policy guidelines when removing passengers from flights based on precaution or security measures.

"We call on the U.S. Department of Transportation to conduct a thorough examination into the prevailing practices of major American air carriers, including Delta Air Lines, and to develop policy guidelines on the objective factors that are to be considered when determining that a passenger may legally be removed from a flight," CAIR-Cincinnati attorney Hassan said, according to the Enquirer.

Faisal and Nazia's story is a stark reminder that in the post-9/11 world, the act of just being Muslim on an airplane is criminalized.

The Alis' experience with Delta Airlines is just one of many incidents where airline companies have ejected passengers for looking Muslim. On Wednesday, two South Asian Muslim women were kicked off a plane after a flight attendant felt threatened. In April, The Young Turks web show host Cenk Uygur, who was raised Muslim, livestreamed being booted off an American Airlines plane. In December 2015, three Muslim and one Sikh men were ejected from a plane. That same month a flight attendant taunted a Muslim man by saying she will be "watching" him over a public announcement system. He was later removed from the plane.

These examples may seem like isolated incidents, but they are not. Muslims are treated like criminals for engaging in the same everyday actions non-Muslims do on airplanes. From Muslims asking for a new can of soda to scribbling on their notepad, their identities as Muslims are treated as an invitation for prejudice and discrimination. Muslims praying for a safe flight or speaking in Arabic have been treated as criminals. A woman's headscarf, being the flag bearer of Islam and the Arabic language is often met with disrespect and hostility.

What happened to Faisal and Nazia, sadly, is just another case of flying while Muslim.