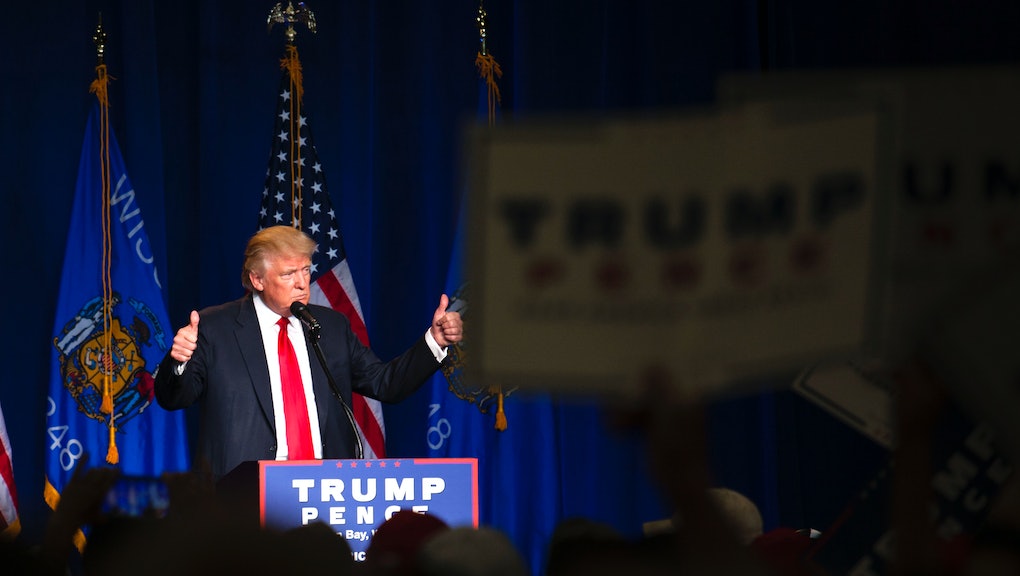 Donald Trump, just days after flirting with a civil war in the GOP over whether or not he endorses Republican Speaker of the House Paul Ryan's re-election bid, appears to have come down with a case of cold feet.

In a speech in Green Bay, Wisconsin on Friday, the Republican nominee endorsed Ryan for re-election, along with two other prominent party officials he said he could not support as recently as Tuesday: Arizona Sen. John McCain and New Hampshire Sen. Kelly Ayotte.

Reading from a piece of paper, ABC News reported, Trump praised McCain's military service, called Ayotte a "rising star" and added "We will have disagreements, but we will disagree as friends and never stop working together toward victory. And very importantly toward real change. So in our shared mission to make America great again, I support and endorse our speaker of the house Paul Ryan."

"We don't win at any level with anything and as a unified party, we will lead our country to unity, as well," he added. "Very important. We need the unity. We have to win this election. No, we have to win it."

It's a remarkable backtrack for several reasons. Trump's original speculation this week the House may need "very strong leadership" instead of Ryan flew in the face of party solidarity during a tense presidential year and after the speaker's own appeals at the Republican National Convention in July the GOP unite against Democratic nominee Hillary Clinton.

Meanwhile, Trump's criticism of both McCain and Ayotte was harsh. The candidate said McCain "should have done a much better job for the vets" and Ayotte "doesn't want to talk about Trump, but I'm beating her in the polls by a lot."

Both Ryan and McCain seemingly made it onto Trump's hit list after criticizing him for mocking the family of Humayun Khan, a U.S. Army captain who died in a suicide bombing in Iraq in 2004. In July, Trump implied Khan's father Khizr Khan spoke instead of his wife Ghazala Khan because as Muslims, they subscribed to oppressive beliefs about the role of women (in reality, Ghazala Khan says she did not speak because the memory of her son was too painful).

Ayotte, who is actually beating Trump in the polls in New Hampshire, has distanced herself from the billionaire. Her Democratic opponent Gov. Maggie Hassan has run on a ticket trying to tie Ayotte to Trump's bigoted statements on the campaign trail.

But now, Trump is reading pre-written notes on how much he likes and respects Ryan, McCain and Ayotte. Perhaps someone concerned about GOP unity in 2016 actually did intervene, as multiple outlets reported was being planned by "key Republicans" this week. Or maybe Trump has just gone on his merry way, satisfied with having made the threat that if other Republicans try to undercut his presidential bid, he can sink the whole thing.