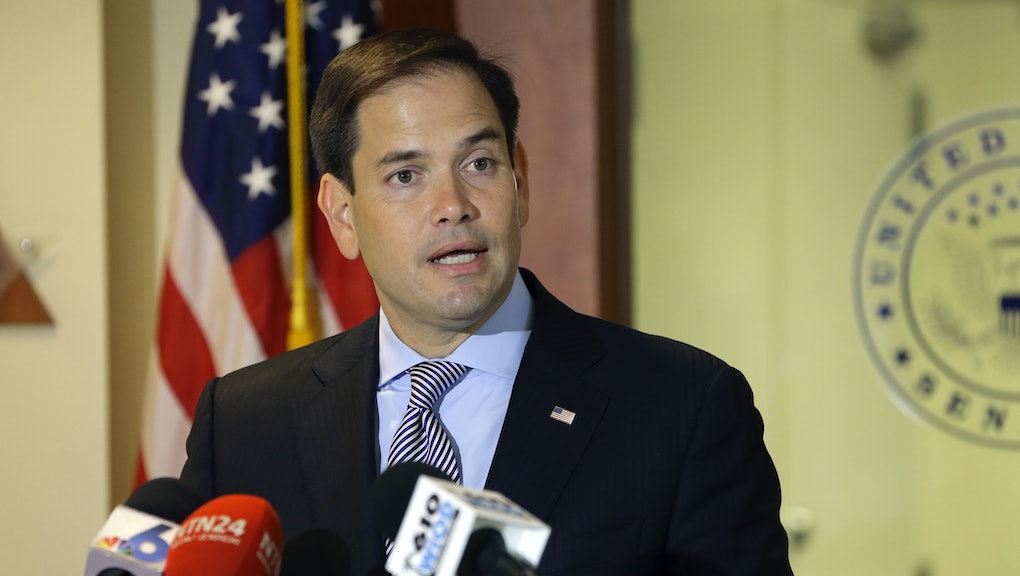 If Marco Rubio "is going to err," he told Politico in an interview, published Saturday, he's "going to err on the side of life." He will not bend his rigidly anti-abortion views even for the very special case the Zika virus presents, requiring pregnant women who've contracted the disease to have children born with severe birth defects like microcephaly.

"Obviously, microcephaly is a terrible prenatal condition that kids are born with. And when they are, it's a lifetime of difficulties," he said. "So I get it. I'm not pretending to you that that's an easy question you asked me. But I'm pro-life. And I'm strongly pro-life. I believe all human life should be protected by our law, irrespective of the circumstances or condition of that life."

The mosquito-borne Zika virus is, in many people, symptomless; in pregnant women, however, it can mean babies born with very small heads and underdeveloped brains — microcephaly.

According to the Centers for Disease Control and Prevention (CDC), microcephaly and severe microcephaly can result in seizures and learning disabilities; the condition interferes with patients' motor skills and makes basic activities like sitting, walking, standing, swallowing and balancing difficult. People with microcephaly might also have problems with vision and hearing, and then, the condition can be fatal.

In South America, where the outbreak is particularly bad, governments have largely responded by asking women not to get pregnant, rather than granting them the right to abortion. The virus has now reached the U.S. and in Rubio's own state, Florida, it's doing the most damage: according to Politico, Florida leads the nation with over 400 Zika cases. The majority of voters support allowing women to get a late term abortion in the U.S., where the procedure is legal. Rubio, however, does not agree.

"I understand a lot of people disagree with my view — but I believe that all human life is worthy of protection of our laws," he told Politico.

In a rare move for a Republican congressman, Rubio has backed President Obama's Zika-fighting legislation. His congressional opponents, however, have accused his party of using the virus as a Trojan horse issue to limit the scope of Planned Parenthood, which provides abortions but also and more frequently, basic reproductive health services. It could be a really valuable tool in stopping the spread of Zika, which can be sexually transmitted.