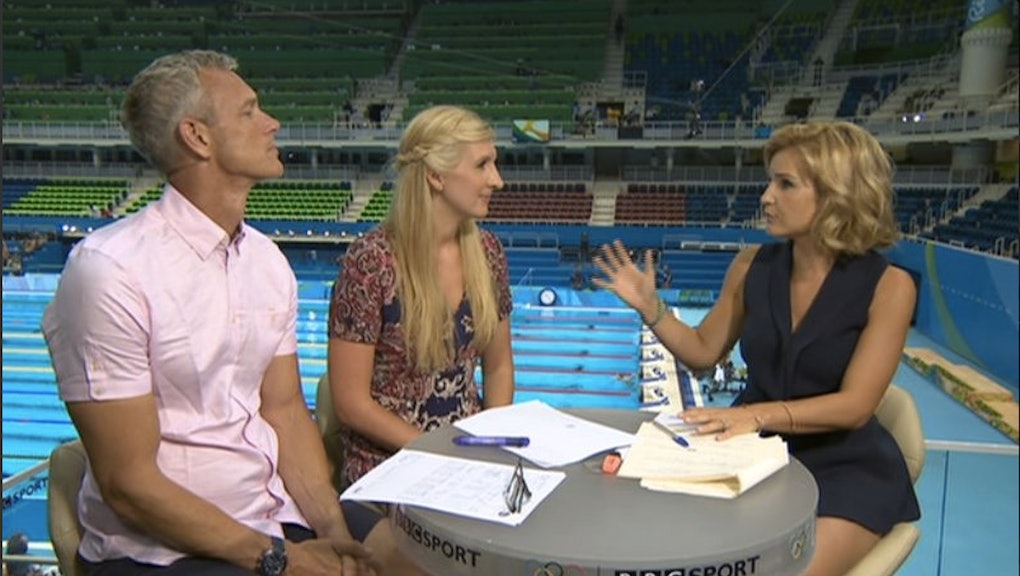 Men must learn to focus better. Women too. But mostly men.

The Olympics are a BFD, aquatic sports like swimming being among the best loved of all the events. But apparently, popular appreciation of pool races was not enough to anchor the internet's attention. During a BBC broadcast, live from the Rio Aquatics Center, host Helen Skelton wore a short dress appropriate to the humid climate, and viewers had eyes only for her legs.

One viewer went so far as to speculate that, judging by the length of her skirt, Skelton must be working as a paid escort during the games, or that she had plans to dash straight from the pool to the club.

The 33-year-old journalist posted to Instagram a group shot of herself with three former Olympians who hosted the event with her; five out of six comments left on the picture focused on her outfit, rather than on the sport or the broadcast.

Predictably, the leg chatter got gross fast, with viewers claiming they could see Skelton's underwear and tweeting at BBC to move the table so they could see up her skirt.

The current temperature in Rio hovers in the 80s, which would explain why her fellow commentator, former swimmer Mark Forster, also opted for leg-revealing bottoms: very short shorts. His being a man would likely explain why the internet didn't jump all over him for his outfit choice.

On Sunday, Skelton seemingly clapped back at viewers who trolled her for the length of her skirt, tweeting a shot of the all-male camera crew with shorts hiked up to display as much creamy thigh as possible.

Some thought it was funny; one made the distinction that these men "aren't sex symbols, though." Neither is Skelton. She is a journalist, just doing her job.

This is not the first underwear-related Olympics incident for Skelton, which perhaps helps explain her ability to handle internet critics with grace and poise. While covering the 2012 London Olympics as a presenter for the Blue Peter, a sudden gust blew up Skelton's skirt on live TV. Surprise, surprise, viewers' reactions included the assertion that she had it coming for wearing "a flowing skirt on a windy day," according to the Mirror.