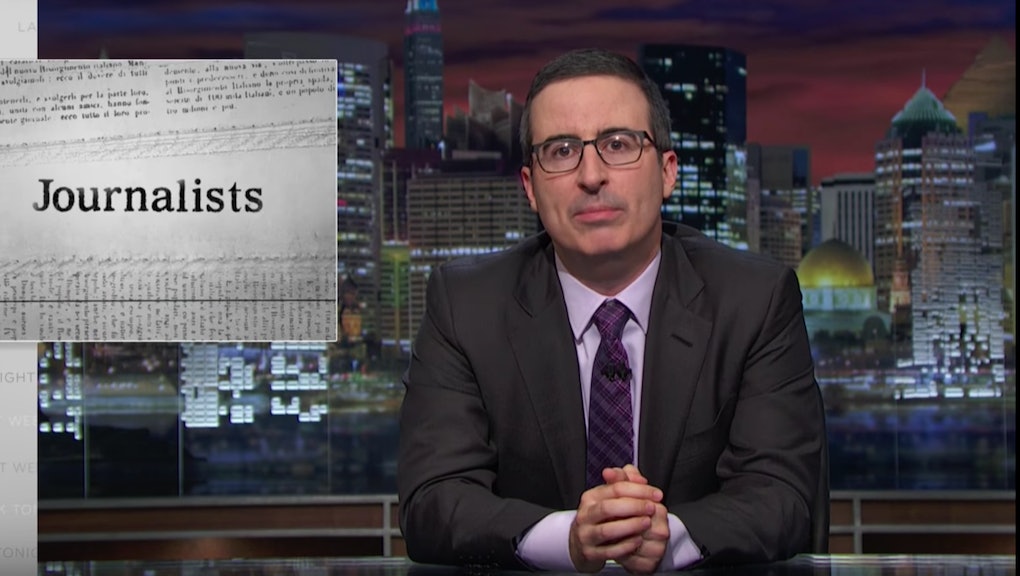 If it seems like print journalism is riding high after Spotlight won Best Picture at this year's Oscars, John Oliver is here to remind you that the industry is still on a rapid decline. The Last Week Tonight host explained Sunday why the downsizing of print media outlets will still affect people who solely get their news online.

"Even if you only get your news from Facebook, Google, Twitter or Arianna Huffington's Blockquote Junction and Book Excerpt Clearinghouse, those places are often just repackaging the work of newspapers," Oliver said.

"The day I run into a Huffington Post reporter at a Baltimore zoning board hearing is the day that I will be confident that we've actually reached some sort of equilibrium," Simon says. "The next 10 or 15 years in this country are going to be a halcyon era for state and local political corruption. It is going to be one of the great times to be a corrupt politician. I really envy them, I really do."

So where does the blame fall? Oliver says a big part of the fault belongs to the consumers. Publications have to, essentially, focus on what will click online to generate revenue, and sometimes that means having a viral animal video taking precedence over local coverage.

"The truth is, a big part of the blame for this industry's dire straits is on us, and our unwillingness to pay for the work journalists produce," Oliver says. "The longer that we get something for free, the less willing we are to pay for it — and I'm talking to you, the person watching this segment on YouTube using the WiFi from the coffee shop underneath your apartment."

To emphasize this further, Oliver ended the segment with a celebrity-filled Spotlight parody in which a local reporter chasing a big story (Bobby Cannavale) is being dissuaded from pursuing it by the paper's editor (Jason Sudeikis). Why? Because another reporter (Rose Byrne) found a video of a cat that looks like a raccoon. That'll get clicks.