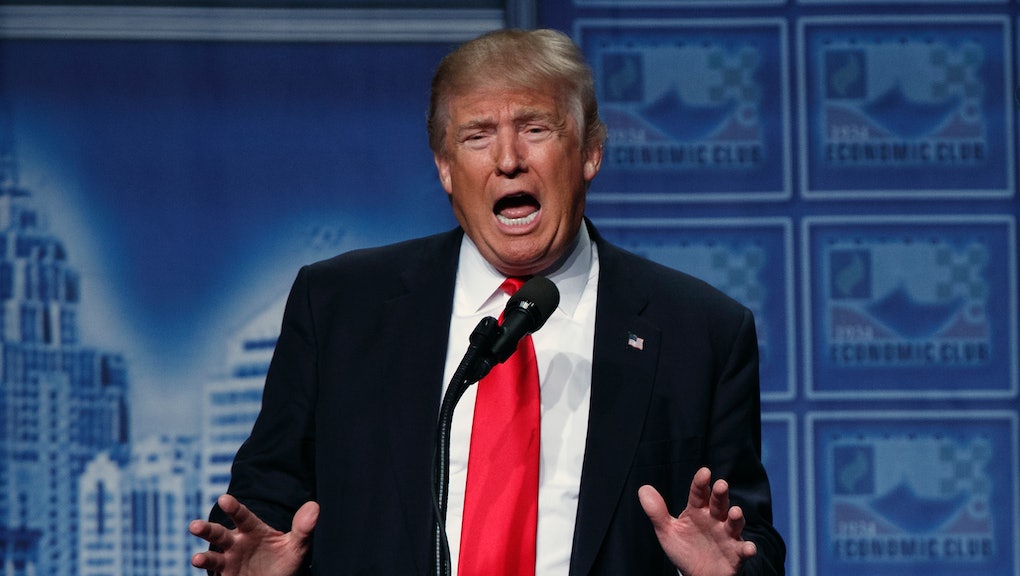 Seeking to reset his campaign after a dismal week that left him badly trailing Hillary Clinton in the polls, Donald Trump delivered an economic policy speech Monday morning in Detroit, where he laid out an agenda that's a dizzying mix of economic populism and conservative orthodoxy.

Many of the proposals appear to be an effort to win over working-class whites and disaffected supporters of Sen. Bernie Sanders, whom Trump hopes will vote for his candidacy over Clinton's.

But what resulted is a plan that goes against almost all of the core tenets of Sanders' campaign, and offered little supporting evidence for how any of the plans would work out.

For Sanders backers, perhaps the only thing worth cheering in Trump's plan is his opposition to the Trans-Pacific Partnership trade deal. Still, he provided little details into how he would improve U.S. trade policy.

Meanwhile, Trump's plans to cut taxes for everyone — including the ultra-rich — runs counter to Sanders' entire movement.

Here are the four Trump economic policy proposals that will make heads spin.

Cutting taxes for the rich

Central to Sanders' campaign was making the richest Americans pay their "fair share."

Sanders railed against the top 1%, who he said were reaping almost all the benefits of a recovering economy while everyone else experiences stagnant wages or diminished net worth.

Yet Trump on Monday introduced a plan that would cut taxes on the highest earners.

Trump's plan, however, would create just three tax brackets, and lower the tax rate on the highest earning Americans to 33%.

In his speech, he offered no details for how he'd pay for such massive tax cuts.

And experts say that unless Trump plans to make deep cuts to American spending, his tax plan would "increase the federal debt to levels never before imagined," according to the nonpartisan Tax Policy Center.

Trump said Monday he plans to repeal the estate tax, saying those who inherit money and assets should not have to give any of it to the federal government.

"No family will have to pay the death tax," Trump said to the Detroit Economic Club. "American workers have paid taxes their whole lives, and they should not be taxed again at death — it's just plain wrong. We will repeal it.

However, the vast majority of Americans who inherit money from deceased loved ones pay no tax on their inheritance.

In fact, 99.8% of Americans do not pay the estate tax, according to the Center on Budget and Policy Priorities, meaning only the very, very wealthy are impacted.

Trump's plan to repeal this tax is in direct contrast to Sanders, who proposed lowering the estate tax threshold to those inheriting $3.5 million or more.

Like the super rich, Sanders also railed against big corporations — whom he said dodged taxes and overpaid CEOs while keeping wages stagnant for their employees.

So supporters of Sanders would likely recoil when they heard Trump's proposal to reduce taxes on corporations, from 35% to 15%.

"Under my plan, no American company will pay more than 15% of their business income in taxes," Trump said Monday, adding that American companies pay some of the highest tax rates of any of the developed countries.

Regulating banks was one of the cornerstones of Sanders' campaign, and continues to be a rallying cry of his supporters, who want to regulate "Wall Street greed."

Sanders said there must be "stricter oversight" (read: regulations) on how banks operate.

Yet Trump said Monday he will put a moratorium on all new regulations — which would not allow for any checks on American industry, Wall Street included.

"Upon taking office, I will issue a temporary moratorium on new agency regulations," Trump said Monday. "My running mate, Mike Pence, signed a similar order when he became governor of Indiana. This will give our American companies the certainty they need to reinvest in our community, get cash off of the sidelines, start hiring for new jobs and expanding businesses.