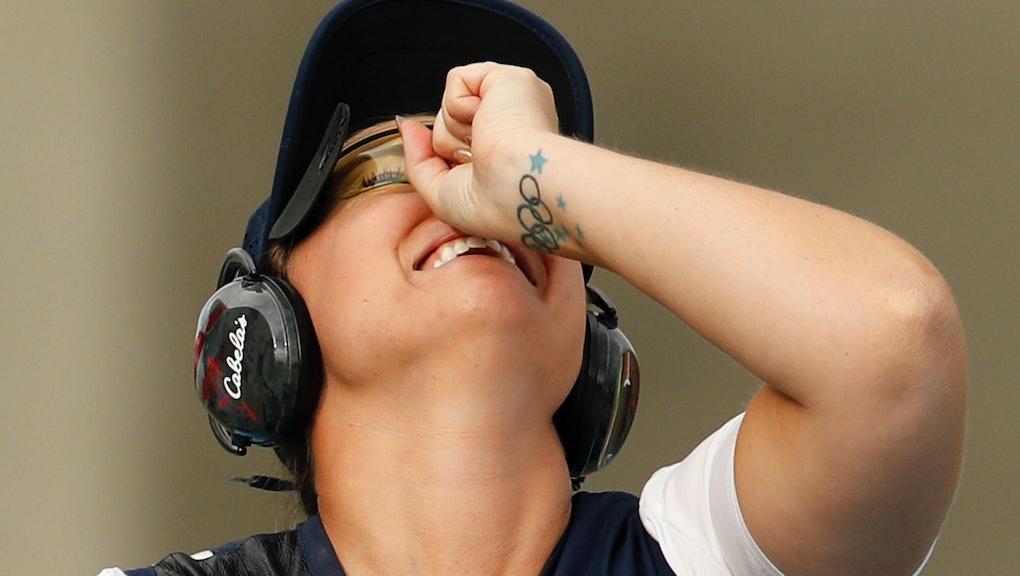 In the sexism Olympics, the Chicago Tribune is going for the gold.

On Sunday, the publication ran a story on Olympic trapshooter Corey Cogdell, who snagged a bronze medal for the United States after a shoot-off for second place, which went to New Zealander Natalie Rooney.

But when tweeting out the article on Cogdell's day-two Rio win, the Tribune didn't shout her out as a three-time Olympic athlete or even name her. Instead, Cogdell is referred to only as the "wife of a Bears' lineman."

Twitter users were quick to point out the sexist gaffe and even offer an alternative:

Though the story's on-page headline takes a turn for the better — reading "Corey Cogdell, wife of Bears' lineman Mitch Unrein, wins bronze in Rio" — the framing of the story falls in line with the onslaught of bias against female athletes at the 2016 Olympics.

After Hungarian swimmer Katinka Hosszu broke the world record for the 400-meter individual medley on Sunday, NBC commenter Dan Hicks credited her husband and coach Shane Tusup for being the "man responsible" for her victory.

The same day, Dutch cyclist Annemiek van Vleuten delivered news on Twitter of injuries (amounting to three fractured vertebrae and a concussion) following a bike crash, which prompted a very helpful man to tweet at her, "first lesson in bicycling, keep your bike steady ... whether fast or slow." Because there's no woman too strong, too capable, too decorated in Olympic medals to avoid having her own expertise explained to her by a man.

Well, two can play at this game.