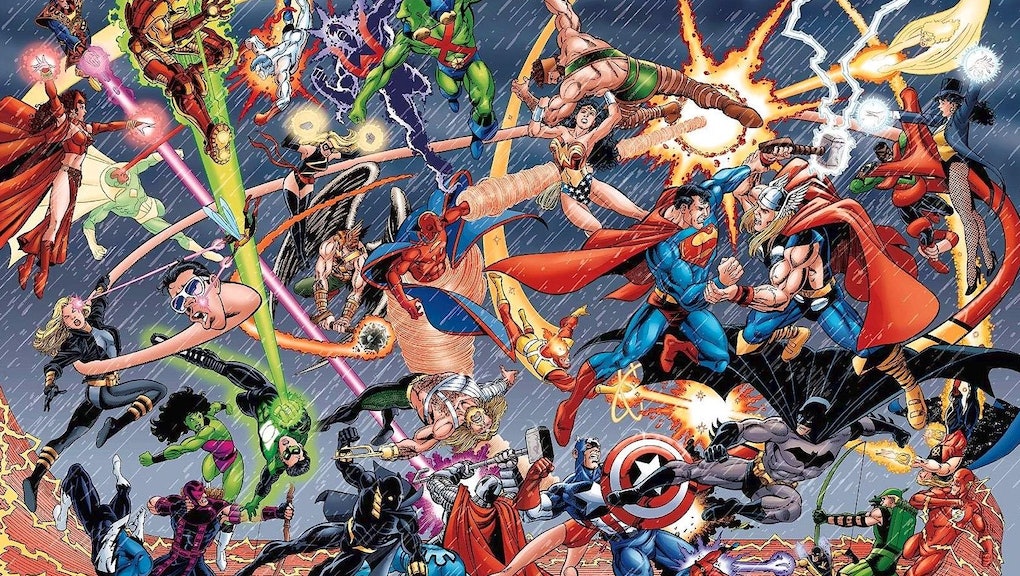 Will Marvel and DC Comics Ever Cross Over? Superhero Venture Is Extremely Unlikely

At a time where the Marvel Cinematic Universe continues to hit financial and critical home runs with its superhero franchises, DC Comics would certainly love to just get one movie right in a post-Christopher-Nolan-directed world. Green Lantern, Man of Steel, Batman v. Superman and Suicide Squad were — to put it mildly — not well-received by critics.

DC's failures thus far are considerable, and yet, undoubtedly there is excitement for the comic giant's upcoming installments after an impressive bevy of trailers at San Diego Comic-Con. Plus, even saddled with poor reviews, Suicide Squad broke a box office record.

But if both cinematic franchises feature iconic superheroes and smash the box office, would they ever cross over on the big screen? While it certainly isn't in the realm of impossibility, fans shouldn't get their hopes up.

Marvel and DC have had crossovers in the comic book space, most notably in 1996 with a DC vs. Marvel limited series. Moreover, as io9 noted, there have been several not-so-subtle comic book crossovers between the rivals over the years.

But the comic book crossover of the two powerhouses was more of a matter of convenience than a harbinger of future collaborations. As Screen Rant's Andrew Dyce explained, it benefited both companies in a once-struggling industry.

"In 1996, the world of comic books was a very different one," Dyce wrote. "Not only did it seem that the medium's best days were behind it (arguably, that's still the case), but Marvel Comics was just a few years away from bankruptcy. In other words: The two rival publishers both had something to gain by meeting fan demand, and were both sorely in need of a boost."

Now, we're in a comic book Hollywood boon that's seemingly endless, especially when both Marvel and DC have timelines mapped out for years. Neither, of course, includes collaborations — which makes sense beyond the longtime rivalry.

Marvel and DC have their cinematic styles in place, the latter of which has assumed a darker tone that's included both Batman and Superman killing people (not exactly what they're known for). Marvel, meanwhile, has taken a wide-ranging approach to its films: Ant-Man was certainly the most humorous Marvel standalone, which fits the character, while Daredevil is a Marvel Netflix series with a darker tone that fits the blind character's narrative.

In other words, their cinematic worlds wouldn't even mesh well — though that hasn't stopped fans from creating their own reimagining of the fights in animated form.

A potential crossover's biggest crux falls on a very simple premise: In a shared universe, who would win? In a crossover featuring heroes — or villains, or both — in conflict with one another, there'd have to be a winner in place, which wouldn't sit well for the one on the losing side. It's a notion Marvel legend Stan Lee has been on-record about as a big setback, along with contractural disputes as petty as which name would come first.

"I don't think there will ever be a movie like that only because of the lawyers and the businessmen and the contracts," Lee said during a MegaCon panel in May. "They'd never be able to figure out who gets what and whose name comes first ... but if they ever could do it, man, I think everybody would want to see that."

Despite the inherent awesome quotient of pitting Batman against Iron Man, or the Flash against Daredevil, it's likely not going to be in the cards for a while — if ever.