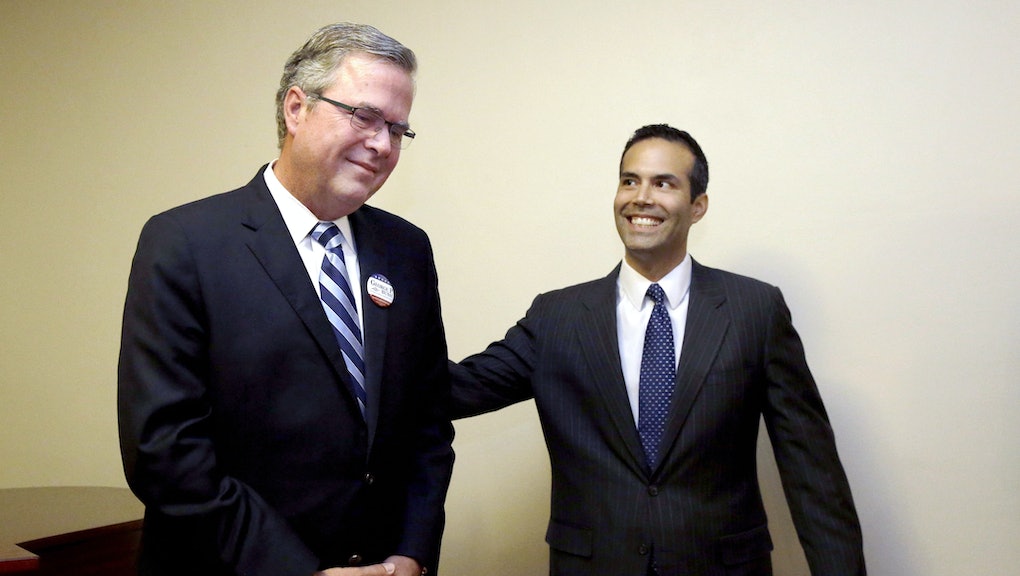 The Texas Tribune reported Sunday that George P. Bush, the son of former Florida Gov. Jeb Bush and land commissioner of Texas, has begun encouraging the state's Republicans to suck it up and support presidential nominee Donald Trump.

"A lot of us in this room had dogs in the fight in the primary leading up to the race, but you know what?" the younger Bush said in his role as the Texas GOP's victory chairman. "It's time to put it aside. From Team Bush, it's a bitter pill to swallow, but you know what? You get back up and you help the man that won, and you make sure that we stop Hillary Clinton."

The elder Bush, of course, was best known over the course of the past year for mounting a presidential bid Trump destroyed in large part with a combination of insults and ruthless mockery.

Trump called Bush "low energy," accused him of switching from glasses to contacts to "look cool, but it's too late," and lambasted him for "just wasting money ... he's got $128 million, and he's in the bottom of the pack." The real estate billionaire even went after Bush for bringing in his "mommy and daddy" — or, you know, George P. Bush's grandparents — saying, "He's a guy who wants to run our country and he can't even run his own campaign."

Finally, Trump twisted the knife at a debate in South Carolina, saying Jeb's older brother, President George W. Bush, not only led the country into a war in Iraq, but failed to keep the country safe on 9/11.

In June, the Austin American-Statesman reported, it was unclear whether the newly minted victory chairman would be able to put what Trump said about his father aside.

But Jeb Bush, as well as members of his family including former Presidents George W. Bush and George H.W. Bush, has apparently found the Trump bill too bitter to swallow. All have declined to support Trump following his primary victories and nomination. In a post-defeat interview in July, Jeb Bush told reporter Nicole Wallace that Trump's platform was a fantasy and "the heartbreaking part of this is I think people are going to feel really betrayed. Conservatism is temporarily dead ... Donald Trump is barely a Republican."