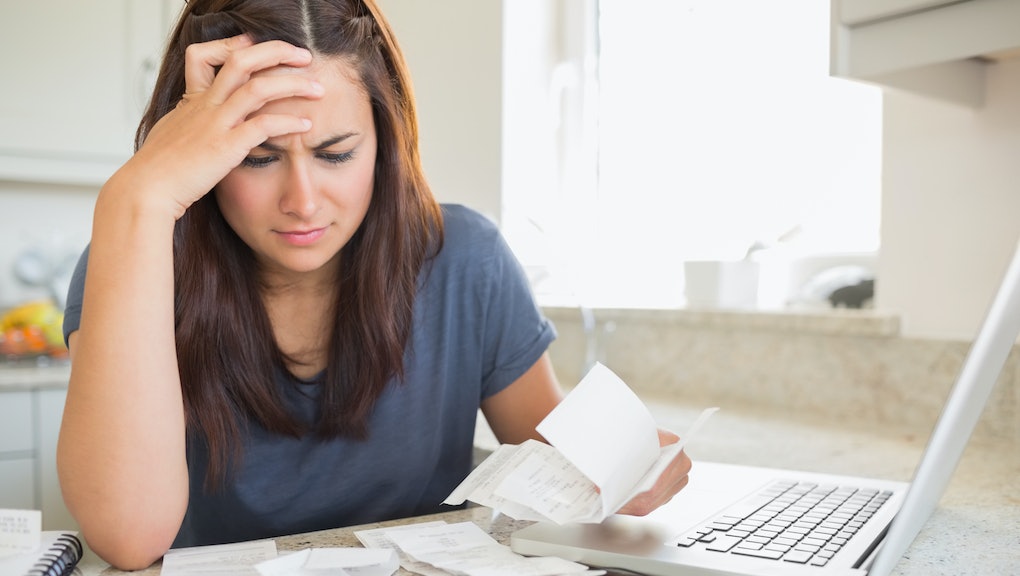 Cell phone bills, electricity, Seamless — the list of holes in your wallet goes on and on.

Plenty of young people feel the same way: In 2016, 64% of millennials say they are stressed about their finances, and 46% specifically have a hard time covering household expenses on time each month, according to a recent survey by PricewaterhouseCoopers.

The good news is it's actually quite easy to retake control so that your recurring bills won't control you.

Here are 10 ways to save hundreds of dollars every month — leaving you more cash for that dream vacation.

It turns out that dirty filters in temperature-controlling appliances — like your precious air conditioner — use more electricity than clean ones, driving up your electric bill. So something as simple as regularly changing or cleaning your filters could save you cash monies every month.

And while you are at it, tape up any cracks around your window unit where air could be leaking out.

Estimated savings: If you never change your air filters and spend about $200 a month on energy, you could save as much as $180 a year by clearing your filters year-round; that's $15 per month.

One of the biggest money drains on your utility bills is heating.

When it comes to your thermostat, think about keeping things just a tad less steamy in colder months. You don't even have to be aware of it: simply reducing your thermostat when you're out during the day or asleep at night can make a big difference. (Pro-tip: This is extremely easy to automate via the timer feature available on most thermostats.)

Estimated savings: Reducing your thermostat settings by 10 degrees for 16 hours a day could save you roughly $7 a month.

The average credit card debt per household in America is $15,310. The average interest rate is 15%.

If you paid off that balance over the course of one year, your monthly cost would be — ostensibly — double what you'd pay if you stretched out payments over two years.

But that's just on the surface: If you plug that balance into ValuePenguin's credit card debt payoff calculator, you'll see that you'd actually save about $1,154 by paying off your debt sooner, because of lower total interest payments.

Estimated savings: Divide that sum by 24 months and your true monthly savings is $48. That is a compelling argument for paying off debt sooner — and always trying to go well above and beyond so-called "minimum payments."

"Minimum payments on credit cards are stacked against the cardholder," Robert Harrow, a credit card expert at ValuePenguin, wrote in an email.  "Many people erroneously believe they are designed to help you pay down your entire credit card bill in a reasonable amount of time. This is not the case. Minimum payments will squeeze out a ton of interest charges from you."

4. Have a lightbulb moment!

Since lighting our homes accounts for about one-quarter of our electric bills, it's probably worth thinking about switching to energy-saving LED or CFL bulbs. They're generally four times more efficient than the more-common incandescent bulbs, reducing your bill.

Estimated savings: Replacing five incandescent bulbs in your home with LED bulbs and using them for an average of 5 hours could result in savings of as much as $34.13 annually — or about $2.84 per month.

The vast majority of people like the idea of going to the gym more than actually going to one: Data shows that only one in five people actually use their memberships.

If that sounds like you, stop wasting your money; there are plenty of free ways to exercise. If you don't like the idea of walking everywhere, you can also do pre- or post-work runs, ride a bike or do some YouTube yoga or P90X in your living room.

Estimated savings: The average gym membership is $60 per month — that's 60 extra dollars you could be putting toward your vacation fund.

If you're paying for more than one type of insurance, it might be worthwhile to consolidate your policies with one company — to incentivize this, companies often offer favorable package deals.

"Several policies can bundle a lot of these different kinds of insurance," said Craig Casazza, a research analyst at Value Penguin who specializes in car insurance. "In actuality, you're probably looking at a discount of around 10% to 15%."

Estimated savings: Let's assume you just have renters and auto insurance. If your cost of renters insurance is $15 and you pay about the average — $200 per month for drivers aged 25 — on car insurance, totaling $215, a discount of 10% is equivalent to saving $21.50 every month.

The average cable bill hovers around $100 per month, so it might be time to convert to Netflix, Chromecast or some other form of streaming entertainment.

Estimated savings: You'll still pay a monthly fee — which for Netflix is about $8 (though there are higher-level plans with more screen sharing and HD options) — so that could potentially amount to a total savings of $92 every month.

Speaking of consolidation, it might be a good idea to consolidate your debt: Explore all of your options, because there might be a much better interest rate out there you just don't know about yet.

The average student debt burden in this country is $37,000. If your current loan interest rate is about 4%, that amounts to about $374 per month for a 10-year loan.

Estimated savings: Some banks offer interest rates as low as 2.1% if you refinance, lowering your student debt repayment to around $342. That's a monthly savings of $32.

One big caveat, however: "Be cautious about consolidating federal student loans into a private loan, as you'll lose many favorable provisions of federal loans, such as income-based repayment, debt forgiveness, deferment, and forbearance," said Greg McBride, senior vice president of Bankrate.com.

The average Uber ride costs about $13, according to data from 2015. That's extra money you don't have to spend, if you can instead walk, bike, carpool, enlist a designated driver — assuming you're in need after a booze-soaked night — or if you already have an "unlimited" prepaid card for public transportation.

Estimated savings: Cutting just 4 rides per month will save you more than $50.

10. Call out your cell phone company.

Chances are your cell phone provider is milking you.

To fight back, you'll have to do a few things. Typically, paying upfront — rather than paying off a phone over time — tends to save you money overall.

You should also calculate how much data you actually use because you could be paying for way more than you need. (Hopping onto Wi-Fi whenever you can also helps with reducing data costs.)

Estimated savings: The average monthly wireless bill is about $47. If you switch over to some of the independently top-rated individual mobile phone plans for 2016, you can end up paying as little as $30 monthly, saving you $17 a month.

TOTAL SAVINGS: In the event that the stars align and you are able to use all of these savings strategies together, you'll be more than $300 richer this month.

Now go forth and save — so you can go on that dream vacation.