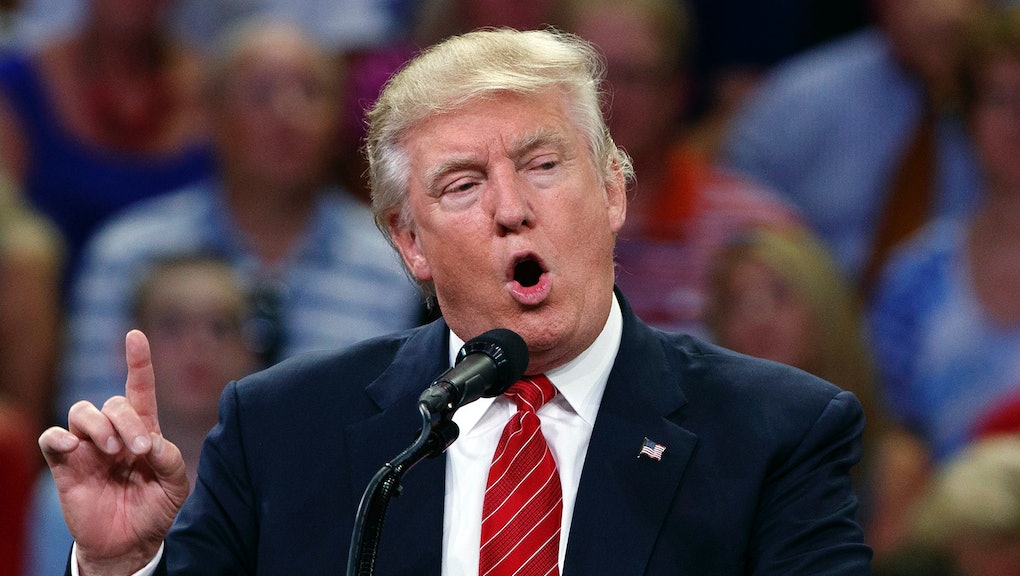 Trump Joked About Assassinating Hillary Clinton, and White Supremacists Are Loving It

Donald Trump's now-infamous line about "Second Amendment people" doing something about Hillary Clinton's presidency is predictably winning big with his most fervent supporters: racists, bigots and anti-Semites. What's more, they're taking his words as a call to action.

"If she gets to pick her judges — nothing you can do, folks," Trump said this afternoon in Wilmington, North Carolina, about Clinton's potential Supreme Court nominations. "Although, the Second Amendment people ... maybe there is."

Inside Trump's rabid online fandom: The raving white-supremacist hordes of the alternative right that center in anarchic forums like 8chan's /pol/ — the same group of racists that popularized the anti-Semitic "sheriff's star" meme Trump used to call Clinton "corrupt" in July — flew into a frenzy over Trump's statement, which they interpreted as a call for a violent coup.

People on /pol/ praised Trump for goading the media into keeping him in the spotlight — apparently, all press is good press — and for "broadcasting a reminder that the Second Amendment's entire purpose is for overthrowing corrupt government," according to one /pol/ user.

Their reasoning: If "corrupt" Hillary Clinton becomes president, through a "rigged" election, Trump has said, she would invite a bloody insurrection.

Speaking to CNN, Trump spokesperson Katrina Pierson actually seemed to endorse this idea, suggesting Trump warned a reaction like this "could happen."

Today's dog whistle shouldn't come as a surprise to anyone who's witnessed a Trump rally in real life. Violent, misogynist rhetoric against Clinton is present and common at these events. In July, at a rally also in North Carolina, a crowdmember shouted "Hang that bitch." "Kill her" and "Trump that bitch" are other common refrains.

Online, the anti-Hillary message is even more extreme: /pol/ users praised something called the "day of the rope" — a reference to the fictional white-supremacist retribution against "race traitors." The day of the rope comes from neo-Nazi novel The Turner Diaries — a book that inspired Oklahoma City bomber Timothy McVeigh, according to hate-speech blogger David Futrelle, who has covered the alt-right extensively.

The forum consistently referenced the RWDS, or right-wing death squads — the group that'd supposedly lead the coup against the government.

"RWDS will win the Civil War, feminists will be deported to South America and Africa where they will be forced to hunt for food to survive, and every anon in this thread gets a rich, blonde ... girlfriend," someone raved.

Another posted a meme of a neo-Nazi Pepe the Frog, a cartoon often used in alt-right circles, murdering a social justice warrior in a "Tumblr" costume with Hitler by his side.

"A cleansing of the political class in the U.S., or the West in general, is long overdue," one user said.

"Finally, the threat of violence is against the liberals," said another. "TRUMP IS GOAT" — meaning "greatest of all time."

Another quoted Thomas Jefferson: "The tree of liberty must be refreshed from time to time, with the blood of patriots and tyrants."

"Maybe when the inevitable Euro support for the federal government tries to suppress the revolution, you can be one of ours on the inside," said another, speaking to a U.K. user who regretted not being part of the action.

Over on Reddit, where users in a group called /r/AskTrumpSupporters questioned whether or not it's OK to joke about assassinating a political rival, a user explained that Trump's statement, taken literally, is perfectly logical, if you concede that the Second Amendment was originally meant to facilitate a violent coup against a corrupt government.

"The Second Amendment people are the only people who would have a fighting chance, are they not?" said EddyOgden. "How would people who don't own guns combat a theoretical tyrannical government?"

On Trump's prominent Reddit fanbase, /r/The_Donald, one post summed up the reaction succinctly: "Now let us defeat the social justice warriors and slay the Crooked Hillary!"