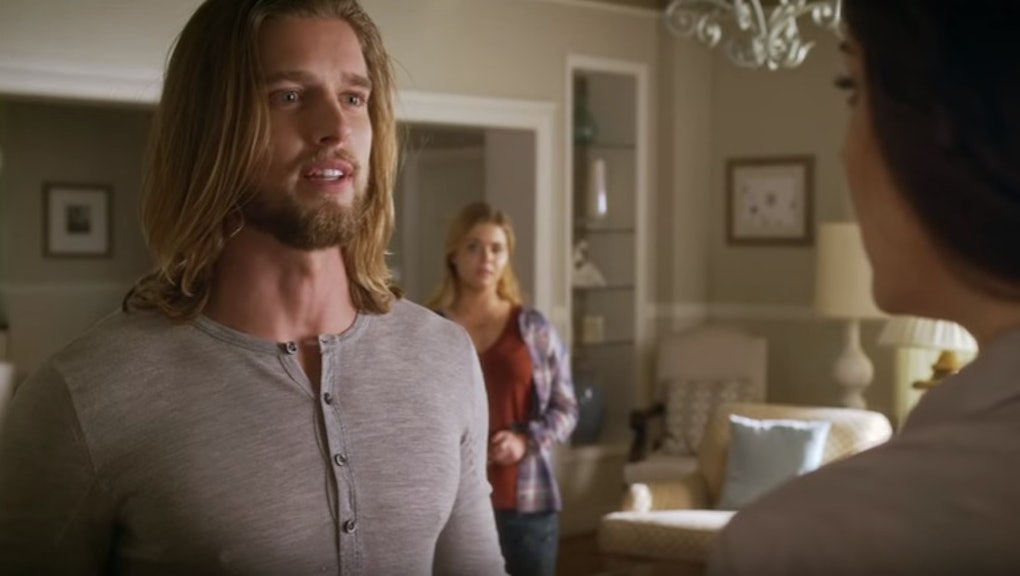 This week's episode of Pretty Little Liars, "Original G'A'ngsters", was all about throwbacks: lairs, new DiLaurentis/Drake/A clues and flashbacks. But most importantly, it was about boys.

The episode opens on the Liars at brunch at the Radley, where they find out about Sarah Harvey's murder. No one really cares. Even Jenna's tears are clearly fake.

The big news this week is that Jason DiLaurentis and Noel Kahn are officially back in the Rosewood game! Thank God for eye candy. But the jury is out on whose return fans are more excited about.

Apparently, Jason has been away in Africa working for a non-profit benefitting children. He's grown his hair and beard out, making him look like a hot Jesus.

He arrives home just as Mary Drake is making a speech to Ali about how they're going to be safe from Archer, now that they have each other. Unfortunately for Mary, Archer drained all of Jason's non-profit's funds. Jason returns with a vengeance and a court order naming him Ali's primary caretaker, and tells her to get out.

Jason worries about Ali's growing attachment to Mary, considering she's a crook and a liar, but Ali (fairly) points out that both her dad and Jason have been completely MIA, so who else is she supposed to consider as family? So he therefore enlists Aria's help to make sure Ali is being smart about her feelings for Mary, and invites Aria to dinner.

"Ali, I think you want to accept her more than you actually should," Aria says. Jason and Aria have always had a friendship, and we've always known that he wishes it was more than that — and he may have gotten his wish! The two hint at "something" that happened between them during the characters' five years away from Rosewood. Did they hook up? Was it something more sinister? Will we get a sexy flashback?

Though the pair don't dissuade Ali from allying with Mary, we do find out one juicy bit of information: Aunt Carol's house, where Charlotte's fake grave was, had a secret storm cellar that probably houses all of Jessica's secrets.

Spencer, Hanna, Emily and Ali go check out the storm cellar, discovering that Jessica had her own very A-like lair dedicated to finding Alison. There are photos of all of the girls plastered all over the walls, a shrine to Ali and a filing cabinet with files on each of the Liars. Aria's file, however, is missing.

They also discover Mary Drake's medical records, which show that she was locked up and given electroshock therapy mandated by Jessica — and that she had another child! Could this missing Drake be the Uber A, back for vengeance for Charlotte's death?

Ezria is finally engaged, but rules of drama dictate that there have to be a few scares before an actual wedding. Minutes before the couple heads out the door to elope in Tuscany, the FBI shows up and tell Ezra that his ex-girlfriend might not actually be dead. Has Nicole been tormenting the Liars all this time instead of six feet under?

Another possible Drake sibling: Noel. He is back, and some how both hotter and creepier than ever. In addition to making creepy eyes at Emily across the Radley bar numerous times, we now know that he almost definitely had something to do with Yvonne's assault, and probably is the person who blew up Jessica's lair. We also hear him a threatening call to a doctor's office, saying that he's "running out of time and patience."

Hanna and Spencer hear him make this call after breaking into Jenna's room and discovering a lock box full of papers, including the burned Archer file that was stolen from Toby's house and a very long printed code. They pull this off with the help of Caleb, who Hanna's mom appointed head of security. (Wait, what?) He distracts Jenna by giving her a complimentary massage on behalf of the hotel — but she doesn't know it's him. (Wait, what?!)

Caleb and Hanna team up to crack the code — in other words, she sits there brooding, while he hacks away at a computer. She finally tells him about her broken engagement, and fans' Haleb hopes are kept alive.

While viewers hope for Haleb, their Spoby dreams might be dead. Toby drops the bomb on us that he and Yvonne are moving to Maine to get away from Rosewood — just like Spencer recommended. When he goes to Spencer's house to say goodbye, he reveals what we've all known all along: he started building that house not for Yvonne, but for her.

The episode closes on Uber A pouring him/herself a stiff drink to sit down and read Aria's stolen file, while burning the evidence of a file on Noel. Further proof that Noel is A.D., perhaps?