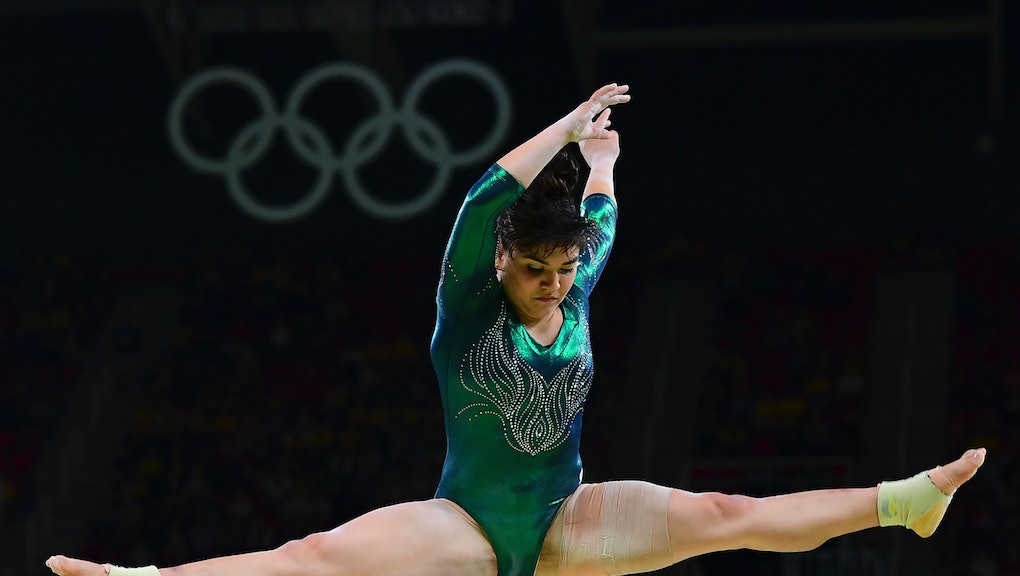 This week, Twitter users viciously body shamed Mexican Olympic gymnast Alexa Moreno. Many of the tweets called her fat and some even compared her to a pig. Others rushed to her defense, harping on the fact Moreno's healthy body can do incredible things regardless of perceived sex appeal.

There's a long history of female Olympic athletes being body shamed, particularly gymnasts, unlike their less scrutinized male peers.That sexist scrutiny isn't helped by the fact that in gymnastics, female athletes perform in heavy makeup and bedazzled uniforms that The Atlantic described as "pageant chic."

Here are just a few examples of female Olympians who faced sexist criticism, and why shouldn't stand for such treatment anymore.

American gymnast Gabby Douglas is a gold-medal Olympian. Yet back in 2012, when she first competed in the Olympics, she was mocked for her black hair. This year in Rio, people are still criticizing her tresses for being "messy" and "not combed."

Last year Douglas reportedly shot back at critics in an interview with the Associated Press, saying: "What's wrong with my hair? I'm like, 'I just made history and people are focused on my hair?' It can be bald or short; it doesn't matter about (my) hair."

Women athletes are body shamed both on the mat and behind the scenes. In her memoir, Olympic gold-medal-winning gymnast Dominique Moceanu said she was constantly "scolded and humiliated and made to feel worthless, stupid, and, yes, fat" by her coaches.

When American gymnast Shawn Johnson competed in the 2008 Olympics, reporters and sports commentators consistently obsessed over her body.

"In interviews, I was asked, 'Do you think you'll be successful, since you have a different body style than a normal gymnast?'" Johnson wrote in a personal column for Quartz. "Journalists, commentators, and anchors kept comparing my body to those of my teammates. I was told that I was too muscular, that I had too much bulk, that I was too short, that I looked too young. People even said that I had big ears!"

Unfortunately, it's not only gymnasts who face condescending criticism about their appearance. Female athletes across the board also deal with all kinds of unnecessary fashion critique.

No matter what they wear, female athletes are sometimes still dressed down and critiqued like fashion icons on a runway instead of Olympic athletes.

Even though there are a record-breaking number of female athletes competing at the 2016 Olympics in Rio, according to Vox, there's still a long way to go before these women are judged on an equal playing field.

Newsflash: The Olympic games are not a beauty pageant. Anyone with criticism of the women's weight, hair or appearance in general should keep that sexist nonsense to themselves.