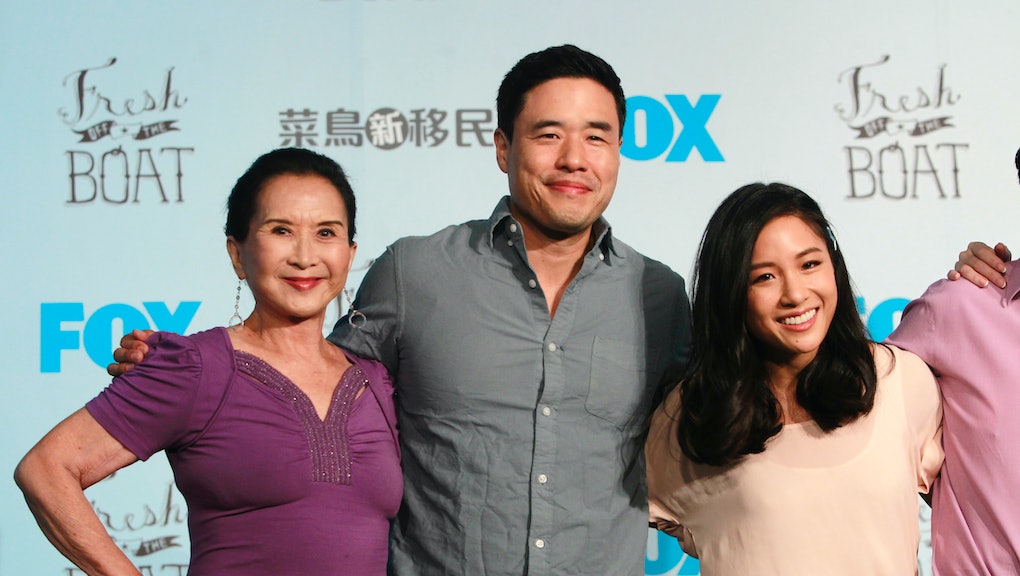 When we look back at 2016 in pop culture, sifting through conversations about representation and inclusion, we'll realize that the Oscars set the table. A firestorm of controversy about the exclusion of nonwhite actors from the acting nominations at the 88th Academy Awards led to sweeping changes — and a new level of controversy when host Chris Rock told a joke about Asian children that sparked an outraged response from Asian creatives.

That moment was a microcosm of why film has become such a difficult place for Asian performers — the struggle for visibility is real. Meanwhile, on TV, there are seemingly more opportunities for actors of Asian descent. Look at shows like Quantico or Fresh Off the Boat, which boast Asian lead characters. That was practically unheard of just a few years ago.

One of the most prominent Asian actors on network TV is Constance Wu, star of Fresh Off the Boat. She's using her spotlight to offer criticism of racist practices like whitewashing in Hollywood, calling out specific instances, unafraid to name names. Unfortunately, even as she and other Asian creators and performers have found work on network TV, adding to cultural conversation about inclusion in pop culture, Asian people remain underrepresented.

There are 67 scripted shows set to air this fall on the big five networks — NBC, CBS, ABC, the CW and Fox. (We're not counting midseason replacement shows, just shows that are debuting at the beginning of the fall season.) Between those 67 shows, there are 533 main characters; not recurring, not guests, just characters played by the main cast members in the upcoming season. Actors who have departed the show since, like Grey's Anatomy's Sandra Oh, do not count.

True, there are several potent and prominent Asian characters among those 533. There's Wu's Jessica Huang, or Alex Parrish on Quantico (played by Priyanka Chopra). There are new shows like NBC's The Good Place, which boast a 33% Asian cast (albeit behind white leads). There's been progress, but these characters remain in the minority.

Only 48 of the 533 characters on network TV this fall are played by Asian actors. That's just 9%. Take out Fresh Off the Boat, with six Asian actors, and the overall percentage drops to 8%.

The methodology: To get this number, we went through each show's main cast for the fall, as identified by the networks themselves. We found that 48 were of Asian descent, either through one or both parents.

Now, there are several arguments to be made here as to why 9% isn't actually that bad. For one, just 5.6% of the U.S. population is Asian. From a pure numbers perspective, network TV is actually over-representing the Asian population. Another note: According to a 2011 Nielsen report, Asians watch much less TV than other racial groups.

Neither of those arguments holds much water, though. The low number of Asians in the U.S. watching TV shouldn't be seen as a cause for fewer Asian actors to be cast in network shows, but an effect. Look at that same Nielsen report. While Asians may watch much less TV, they also consume much more online video. Perhaps that's because of streaming shows like Netflix's Master of None, created by and starring Aziz Ansari. Or it could be because of the influx of Asian content creators on YouTube.

The over-representation argument is flawed, too. Inclusion is not about a one-to-one match. Asian-Americans have been consistently underrepresented in media; merely casting a few to hit some kind of quota won't be enough. Plus, that argument assumes every one of those 48 Asian characters is a thoughtful, well-formed representative. Critics of shows like ABC's Dr. Ken would disagree that all 48 are such representatives.

The fact is that network TV, like other aspects of Hollywood, is woefully behind in representing Asian people intelligently and wholly, with the same complexities their white counterparts often get. This is why it's vital for people like Wu, or like Ansari, to speak out. Their voices have the power to actually effect change in the industry — but only through persistence.

When pop culture historians write about 2016, they very may well write of it as the turning point in Asian representation in Hollywood. If they do, it will be thanks to those creators, those critics and those viewers whose vocal rebukes made noise. Thanks to them, hopefully this underrepresented minority will soon no longer have to fight for visibility.