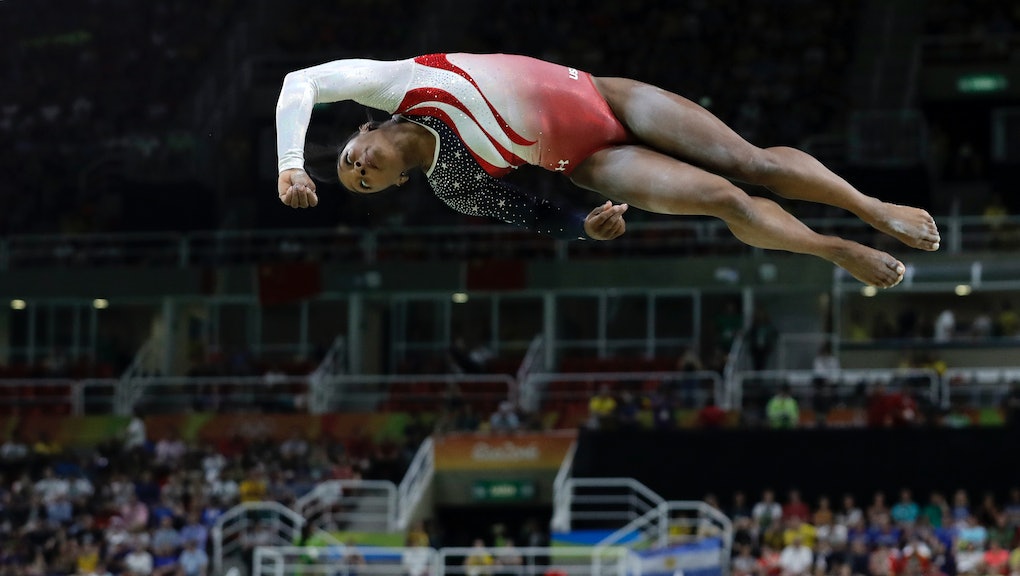 Simone Biles Is Not Just Incredible, She's a Scientific Phenomenon

Simone Biles is officially a superstar — she already has one gold medal from the women's all-around gymnastics and is poised to win more before the 2016 Olympics are over. Gymnastics legend Mary Lou Retton has called the 19-year-old Biles "the top gymnast in history," according to the New York Times — but she's more than just an amazing athlete, Biles is a scientific marvel.

Biles' special move, "The Biles," is one that pretty much only she can do: a "double layout with a half-twist and a blind landing," according to the Times. No one had ever tried it in a competition before her.

When she performs her signature, gravity-defying move, Biles launches herself so far in the air that she can do two complete flips before landing. This is, as physicist Faye Barras told Inverse, "Incredible."

Barras spoke to Inverse about Biles' moves from the perspective of a physicist, delving into the science behind her seemingly superhuman abilities.

"During the layout, she does two singles, and then what it looks like is that she's gaining angular momentum so she can do the turns," Barras said. "What I was amazed at is that last double layout. I mean, she has to get so much height there in order to be able to spin twice with her full body length extended. It looks, from the video, almost like she has to get her whole body height up, which is incredible."

That's right, when Biles pulls off her signature move, her distance from the floor is basically equal to her height. According to Barras, Biles gets that high up on the strength of her muscles, propelling herself with "enough speed and kinetic energy ...  to actually reach that height."

And then when she lands, her body absorbs all the force she built up in the jump — and, according to Barras, it seems like too much force for a human to handle.

"But just the amount of force on her feet and knees as that's happening is — I was just doing a rough calculation, and my number seemed way too big," Barras said to Inverse. "It seems almost like a ton or more of force, which seems way too big. It's possible I made a bad calculation ... Her knees have to be really strong. The tendons and muscles around there have to be really built up to even attempt that."