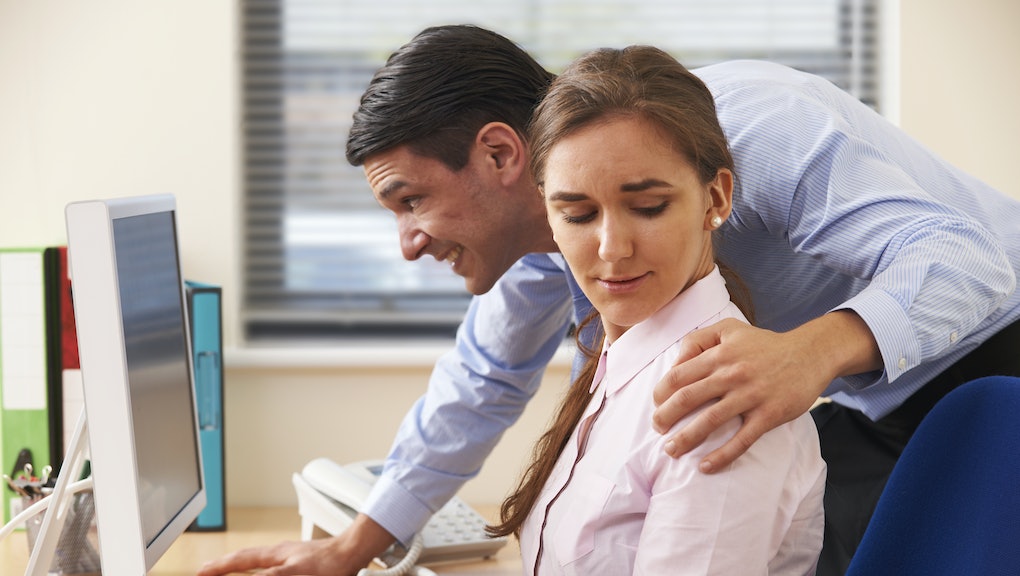 Most Working Women in the UK Have Been Sexually Harassed on the Job, Study Finds

A new study conducted in the United Kingdom confirmed what any woman with workplace experience would put money on: The majority of working U.K. women have had to put up with sexual harassment on the job.

That's according to a new study in which researchers from the Trades Union Congress and the Everyday Sexism Project surveyed 1,533 women and found that 52% had encountered inappropriate, sexualized behavior on the job. There's no reason to think things would be different or better here in the United States, where employment discrimination laws are not dissimilar.

Indeed, some U.S. women may identify with the experiences shared in the report. On woman recalled a former colleague who told her his "biggest regret was that he didn't get a chance to rape [her] in the store room before I left." Another, who worked at a law firm, confirmed the brand of habitual harassment the American Bar Association recently identified as hugely problematic. From the U.K. report:

Whenever I won a case in court, I would be lambasted by a particular male colleague who would leer at me and make such inane comments as "How much did you pay the judge to win the case?," "You only won because you're wearing a skirt" and "Did you sleep with the judge then?"

Nearly a third of the women surveyed were made the butt of sexual jokes; 28% received sexual comments about their bodies or clothing; about a quarter experienced unsolicited, inappropriate touching; a fifth fielded unwanted advances. Four out of five women never reported the behavior, usually attributable to a senior male colleague.

That explains another alarming stat from the report: 63% of the women polled who fell between the ages of 18 and 24 said they'd been sexually harassed at work.

"The thing about the younger women issue is that it really displays the power imbalance inherent in these situations," Laura Bates, founder of the Everyday Sexism Project, told Broadly. "These are vulnerable people, often in their first jobs, being taken advantage of by men who are often much older than them, and in a position of power and control over their career."

The reasons women don't come forward are legion: wanting to keep one's job; rationalizing that if the event didn't occur on the clock or in person, it doesn't count; wanting to avoid the victim-blaming that often accompanies such allegations. But the psychological fallout from sexual harassment is real and serious.

There can only be one solution: