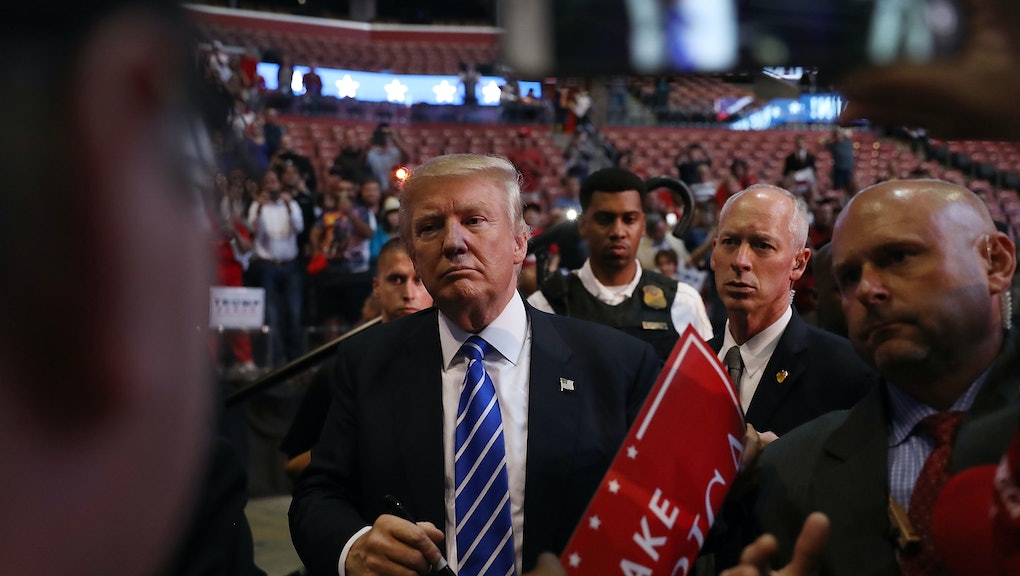 Donald Trump Says President Obama "Is The Founder of ISIS"

Continuing, the real estate billionaire implicated his Democratic competitor as well: "And I would say the co-founder would be crooked Hillary Clinton."

Several minutes later, after detailing the president's supposed foreign policy failures in the Middle East and Eastern Europe, Trump played up the president's middle name — saying Russia annexed the Ukrainian territory of Crimea "during the administration of Barack Hussein Obama."

Trump made individual gestures for emphasis while saying each segment of Obama's name, which comes from his grandfather and means "good" or "handsome one" in Arabic.

It's far from the first time Trump has insinuated the president has secret ties to Islamic extremists, or has otherwise accused him of suspicious activities using language that is implicitly racial. In 2011, Trump was a leading voice of the birther movement, which claimed Obama was concealing his true citizenship (supposedly Kenyan) and thus ineligible to serve as Commander in Chief.

And in June, Trump responded to the mass shooting of 49 people at a gay nightclub in Orlando by saying the president "can't even mention the words 'radical Islamic terrorism.' There's something going on. It's inconceivable."

In his defense, Trump cited an article on right-wing site Breitbart claiming Clinton was aware Obama had backed Al Qaeda in Iraq, one of the predecessor groups which eventually formed ISIS, as a way to weaken Syrian strongman Bashar al-Assad.

As Politifact noted, the source of the rumor — a memo detailing opposition groups to the Syrian government — did not in fact endorse working with Al-Qaeda in Iraq to depose Assad.

Trump's attack on Clinton as a co-conspirator in the matter of ISIS' origin comes a day after he suggested "Second Amendment people" could "do something" about a potential future President Clinton, a remark interpreted by many including white supremacists as a suggestion they should assassinate her.

As Politifact additionally noted, there is room to dispute whether Clinton's tenure as Secretary of State under Obama unintentionally resulted in a growth of ISIS' power — but the group's origins predate either Obama or Clinton holding positions in the executive branch of the government.

Instead, Al-Qaeda in Iraq was formed in 2004, during the Iraq War, which Obama opposed from the start and Clinton now claims she only supported to put pressure on dictator Saddam Hussein's government to comply with international nuclear inspections.

Strange. There's that name again: "Hussein." It's pretty clear what Trump was trying to suggest.