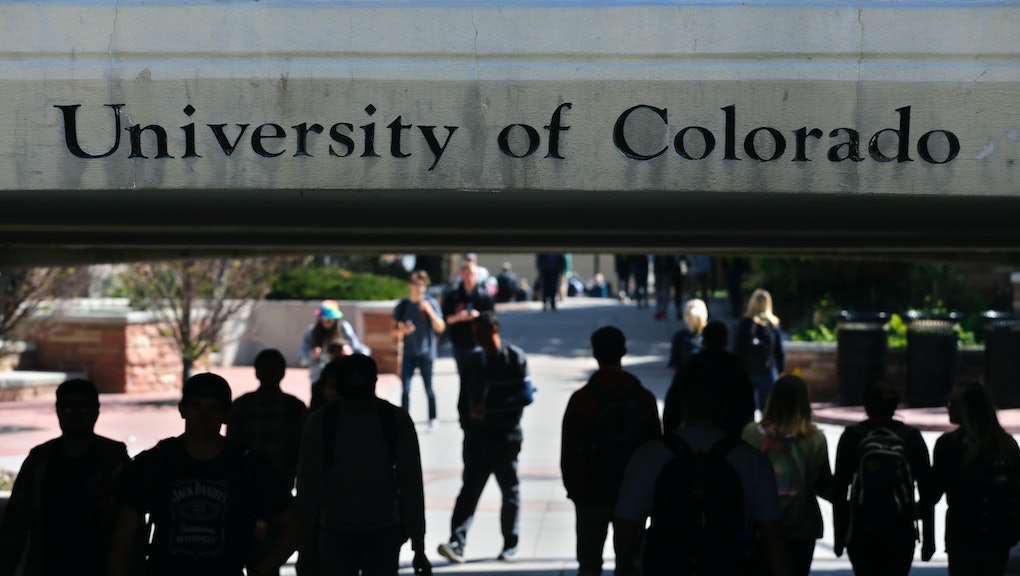 Austin James Wilkerson, a student at University of Colorado, Boulder, was convicted of raping "a helpless young woman" — but will not serve time for it, a judge ruled on Wednesday. Wilkerson took advantage of the fact the woman was drunk, promised her friends he'd care for her and instead, sexually assaulted her.

Wilkerson's crime would typically earn him four to 12 years in prison, according to the Guardian. In Colorado, his term could've been longer — he would've stayed in prison until "deemed fit." Instead, Judge Patrick Butler sentenced him to two years of work release and 20 years probation.

Which is to say, the 22-year-old won't be going to prison — he'll be attending school (he's currently suspended) or going to work, and returning to the county jail at night.

"I've struggled, to be quite frank, with the idea of, 'Do I put him in prison?'" Butler said, according to Boulder's Daily Camera. "I don't know that there is any great result for anybody. Mr. Wilkerson deserves to be punished, but I think we all need to find out whether he truly can or cannot be rehabilitated."

Statistics show many rapists are repeat offenders. A study at one university pointed to an unfortunate pattern in rapists: 63% of men surveyed who admitted to behavior befitting the definition of rape were repeat offenders, According to the National Sexual Violence Resource Center.

Many men who commit sexual assault don't just do it once — and when they don't understand they've done something wrong, it's especially unlikely that they'll reform their behavior.

What's more, Wilkerson is known for duplicitous behavior. When the incident occurred March 15, 2014, he assured the victim's friends he'd take care of her when she got too drunk, according to court documents obtained by the Guardian. Instead, he "isolated and raped the half-conscious victim," prosecutors reportedly said.

Wilkerson eventually confessed that he "digitally and orally penetrated" the victim, but his story changed throughout the duration of the university investigation and legal process, according to the Guardian. Initially, he said she'd been drunk and largely unresponsive; at trial, he alleged the encounter had been consensual and she had been sober.

Prosecutors suggested Wilkerson expressed hollow remorse about the incident, according to the Guardian. He reportedly told university investigators the victim had "rebuffed" advances he'd made, which left him feeling "pissed off." He also called the victim a "fucking bitch."

"The defendant has demonstrated highly manipulative and deceptive conduct throughout this case," the prosecution wrote in a memo, according to the Daily Camera. "He has also consistently given whatever account of the events of March 15, 2014 that best serves him at the moment."

Butler appeared to agree. "I do have some great concerns over, as I would describe it as, ways he tried to play the system," he said, according to New York magazine.

Sadly, the outcome of Wilkerson's case isn't unusual. According to the Huffington Post, Wilkerson's family pleaded for the judge to go easy on him, saying the rape was a "traumatic incident" for him. The entire case echoes the injustice of Brock Turner's, wherein the ex-Stanford swimmer was found guilty of assaulting a woman and sentenced to just six months in jail — much of which he won't actually serve.

In both cases, the judge assumed that a rapist could be rehabilitated, despite his failure to demonstrate real remorse; in both cases, the admission of guilt failed to garner a punishment. To Boulder County's deputy district attorney, Caryn Datz, that indicates a troubling pattern in the way we handle sexual assault.

"It does not satisfy our concerns about deterring one of the most prolific and impactful crimes of gender violence in our society," Datz told the Guardian. "In 2016, we still have a long way to go."

Mic has received Wilkerson's mugshot from the Boulder County Sheriff's Department and will publish it when permission is granted.