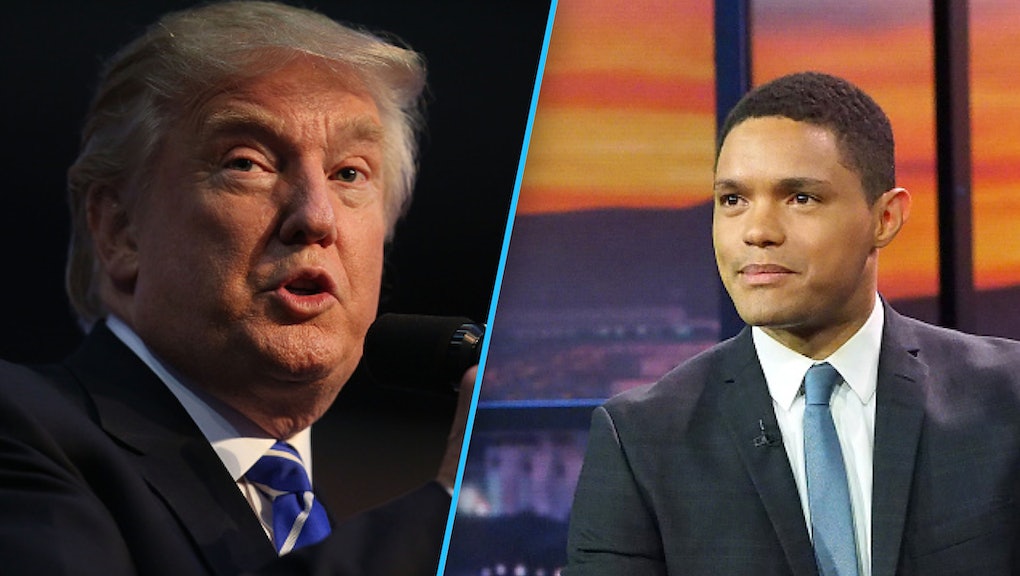 The clashes at Donald Trump's campaign rallies finally make sense. His supporters see one thing, while the rest of the United States sees another.

Or as comedian Trevor Noah put it on Wednesday night's episode of the Daily Show, the Republican presidential nominee is "the Dress."

"Every time Donald Trump speaks, it's 'the Dress!'" Noah said. "We're all trying to figure out what the hell it is. And no one can agree, which is entertaining for an Instagram meme — but it's not good for a commander-in-chief."

On Tuesday, Trump spoke to a campaign rally in North Carolina about the impact Hillary Clinton might have on the Supreme Court if she were elected into the White House. What he said next launched another debacle in the general election: He made a "joke" about assassinating Hillary Clinton.

"If she gets to pick her judges — nothing you can do folks," Trump said, referring to Clinton's ability to nominate justices if she were elected. "Although, the Second Amendment, people, maybe there is."

Noah called out the statement from Trump's campaign, which said the GOP nominee meant Second Amendment advocates can use the power of voting.

"Ohhhhh, of course, it all makes sense now" Noah said sarcastically. "The Second Amendment people have an extremely powerful weapon. Votes... which they shoot out of their guns!"

He also pointed out that while most politicians need interpreters abroad, Trump actually needs one to speak in his own country — a big flashing warning of just how unfit he is to run for president of the United States.

You can watch the episode here.