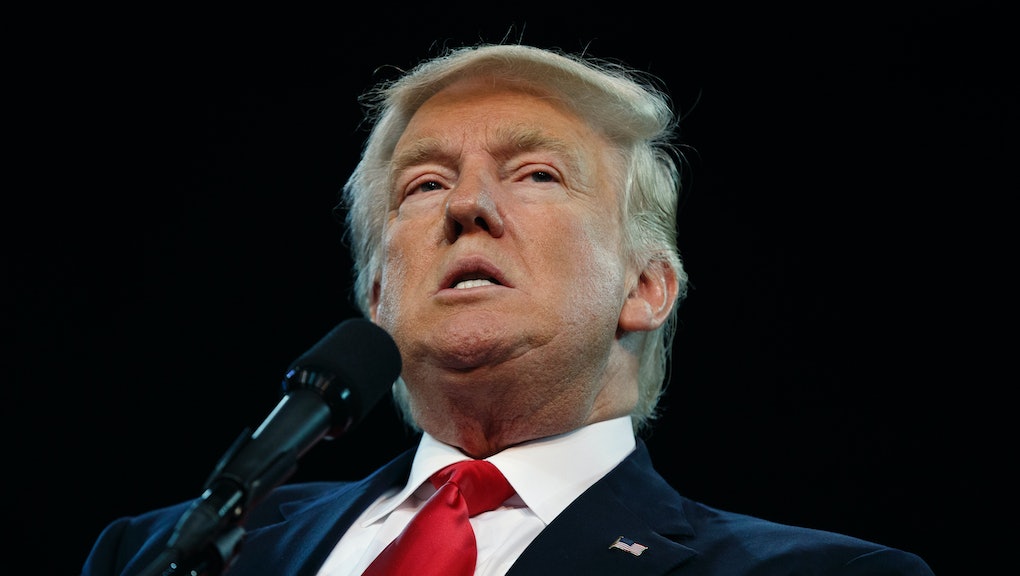 One big reason Donald Trump is losing: Americans aren't as angry as he thinks

Seeking to ride a wave of populist anger to the White House, Donald Trump has offered himself to voters as a tribune of the disaffected, the disenchanted and the once-disengaged.

"I'm representing a lot of anger out there ... We're not angry people, but we're angry at the way this country's being run," he told CNN's Jake Tapper in February, as Republican voters' visceral antipathy toward the political and economic establishment was propelling him to the GOP presidential nomination.

Accepting his party's nod in Cleveland last month, Trump made clear he had no intention of pivoting away from appeals to popular anger, warning of a "nation in crisis" amid rising crime, terrorism and political corruption.

"I am your voice," Trump proclaimed to the fed-up, the fearful, the furious.

Many of them might agree, but the dire state of affairs confronting Trump's flailing campaign underscores that they won't be enough to lift him to victory.

There's a laundry list of reasons Trump is trailing Democratic nominee Hillary Clinton in the polls: his penchant for inflammatory rhetoric targeting immigrants, Hispanics, Muslims and women, his choice to pick a fight with a Gold Star family, his call for "Second Amendment people" to stop Clinton.

But Trump's failure to gain traction largely boils down to something quite simple: Americans just aren't as angry as he thinks.

At first glance, national anger would seem to be one the few big things Trump has going for him. Nearly two-thirds of Americans tell pollsters the country is on the wrong track, and an Associated Press-GfK poll released in April found that a staggering 78% of Americans were dissatisfied or angry with the federal government.

So why aren't such figures redounding to Trump's benefit? Simply put, they don't mean what he'd like them to mean.

"People are just frustrated with politics, and it's unrelated to any party or any person," said Steve Schale, a veteran Democratic strategist who managed President Barack Obama's 2008 campaign in Florida. "They're looking at politics and asking, 'Why isn't anything getting done?'"

There's a big difference, Schale said, between frustration with government gridlock and economic inequality, on the one hand, and, on the other, a wrathful desire to cast off the political establishment and radically upend domestic and foreign policy.

In the AP-GfK poll, for instance, only 34% of Americans said that they were angry with the federal government, compared with 44% who were simply dissatisfied. And while an overwhelming majority of Americans may say that the government is "broken" and agree with Trump's view that the economy is "rigged" in favor of powerful interests, they don't buy his message that only an anti-establishment outsider can address their frustrations.

A recent survey conducted by the Global Strategy Group, a Democratic-aligned consulting firm, found that while voters see the political system as dysfunctional and dominated by big-money interests, they prefer to elect candidates with government experience over political outsiders. Sixty seven percent said they'd be more likely to vote for the latter, while just 33% were more likely to vote for true outsiders. Even a majority of Republicans, 52%, said they preferred experienced candidates.

Moreover, the survey found that voters preferred candidates who emphasize a track record of accomplishments in government over those who rail against the ills of the political system. While 52% found it "very appealing" to hear a candidate stress his or her government accomplishments, as Clinton has, only 31% were keen to hear denunciations of Washington corruption, while 28% wanted candidates to hammer away at government gridlock.

Such figures underscore the sharp differences between the broader general electorate and the far narrower primary electorates that nominated Trump and led Bernie Sanders to a stronger-than-expected showing against Clinton.

While Trump and Sanders' successes at the ballot box seemed to point to an undercurrent of populist rage that transcended left and right, the two men combined won a little more than 25 million votes in the primaries — less than one-fifth the total of voters who turned out in the 2012 election.

Surveys show that voters part from the two candidates on key issues where they sought to capitalize on popular anger. Though both Sanders and Trump have vociferously blasted free trade — with the Vermont senator calling them job killers and Trump arguing the U.S. has been "defrauded" by its trading partners — recent polls from the Pew Research Center and NBC News and the Wall Street Journal show clear majorities of voters favor free trade. A majority also believe that immigration helps the country and that growing racial and ethnic diversity makes the U.S. a better place to live, positions that put them at odds with Trump supporters.

"Seventy percent of the country says the country is on the wrong track, but that doesn't mean that 70% of the country thinks there are roving bands of rapist Mexicans knocking down people's doors and thieving from them, wearing their Satanist bandanas," Miller said.

To hear Trump tell it, it's the Democrats describing a state of affairs that "doesn't exist." So he put it after Obama delivered an unapologetically optimistic address at the Democratic National Convention in Philadelphia, where the president extolled the liberal policy goals achieved over the course of his administration and championed Clinton as a president who would guard and build upon his legacy.

Ominously for Trump, however, Obama's approval rating has actually steadily climbed in his last year in office. It now stands at 52%, with only 44% of Americans disapproving, according to RealClearPolitics. Public approval of the president hasn't reached such heights since 2013.

Even amid growing public esteem for the president, Trump insists that Obama is arguably the "worst" president the country has ever seen — a jab that may thrill audiences already aboard the Trump Train, but that isn't resonating with the broader electorate. If an incumbent president's approval rating is 50% or greater, his party typically wins the general election.

Trump's staggering unpopularity with voters may be more than enough to power Clinton to victory even if Obama's approval rating dips a bit over the next three months — and given the brutal electoral math confronting his campaign, many Republicans are already contemplating how the party can revive itself after what they see as Trump's likely defeat.

Even if Clinton notches a landslide victory over Trump, there will be ample incentive for ambitious Republicans to emulate the pitchfork populism that catapulted Trump to his astonishing primary victory.

"It's still going to get republican politicians more fundraising and more time in front of the camera if they push more extreme rhetoric," Miller said. "The base of the party that nominated Donald Trump is not going to change overnight."

But the prospect of a fourth consecutive defeat in 2020 may lead cooler heads to prevail.

"Eight years of Barack Obama and having to watch Hillary Clinton on TV for four years — hopefully that's the incentive that counterbalances the desire for more retweets and $5 email donations," Miller said.