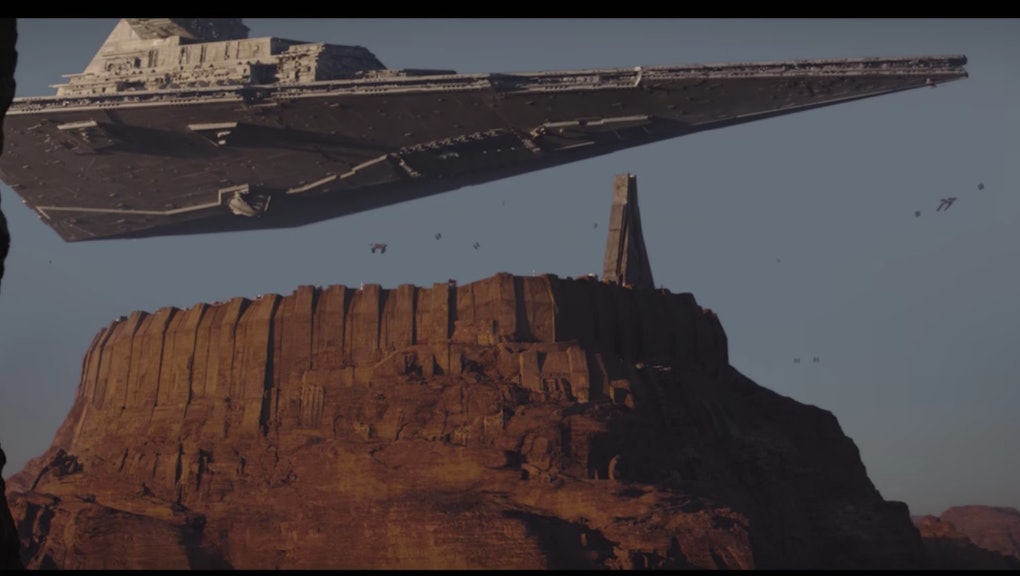 4 Biggest Takeaways From the Latest 'Rogue One: A Star Wars Story' Trailer

Amidst the medal ceremonies and Michael Phelps breaking a centuries-old Olympics record, NBC viewers got first dibs on the sight of a brand new trailer for Rogue One: A Star Wars Story Thursday night.

The second trailer offered a better glimpse at all the major characters in the film — sans Jyn Erso (Felicity Jones)'s mysterious father, played by Mads Mikkelsen, whose scientific work is sought by both the Empire and Rebels. In the end, the trailer also delighted fans with a cameo from a hauntingly familiar face.

Disney's been consistent about keeping its Star Wars trailers vague, but there's still a good amount of discernible information to take away from the trailer.

All the heroes have a distinct disdain for the Empire. The first trailer for Rogue One examined the backstory for the film's lead, Jyn Erso (Felicity Jones), but the second trailer touched upon why other members of the Rebel team assigned to steal the plans of the Death Star set forth on the mission.

There's a former Imperial pilot, Bodhi Rook (Riz Ahmed), who's still wearing an Imperial jacket, but clearly shows no devotion to them; an assassin Baze Malbus (Jiang Wen) whose hatred of the Empire stems from them destroying his home; and a peaceful warrior Chirrut Imwe (Donnie Yen) who helps Erso escape from the clutches of the Stormtroopers.

Jedha is a Jedi sanctuary — but it's also under Empire rule. Entertainment Weekly previously reported about Rogue One visiting the planet Jedha, which is essentially a mecca for Jedi and believers in the Force. However, it's seen better days: By the time Jedha is visited in Rogue One, the Jedi are nearly extinct and the Empire occupy the area.

One reason the Empire has built a base of operations there, some fans theorize, is that the planet is where kyber crystals are harvested — the material that's used to construct lightsabers. Perhaps, then, that same material is used to create the destructive power of the Death Star, and the Empire is trying to harvest it for themselves. Nevertheless, it's a planet both the Rebels and Empire will visit in the film, in great numbers.

K-2SO delivers just two lines, but both demonstrate a deadpan approach to his morose, sociopathic tendencies, telling Jyn Erso in one scene, "The captain says you are a friend. I will not kill you." Later in the trailer, he tells Erso and co., "There is a 96.7% chance of failure," presumably referring to their mission.

Some guy wearing a black helmet showed up. This indiscernible character appears at the end of the trailer, and he doesn't even have the nerve to face the camera.

That person, of course, is Darth Vader, one of the most iconic movie villains of all time. Suffice it to say, with James Earl Jones reprising the character's chilling voice — briefly teasing us with his infamous breathing — there's good reason fans exploded in the Twitterverse after just a second of Vader footage.

Rogue One will arrive in U.S. theaters Dec. 16.