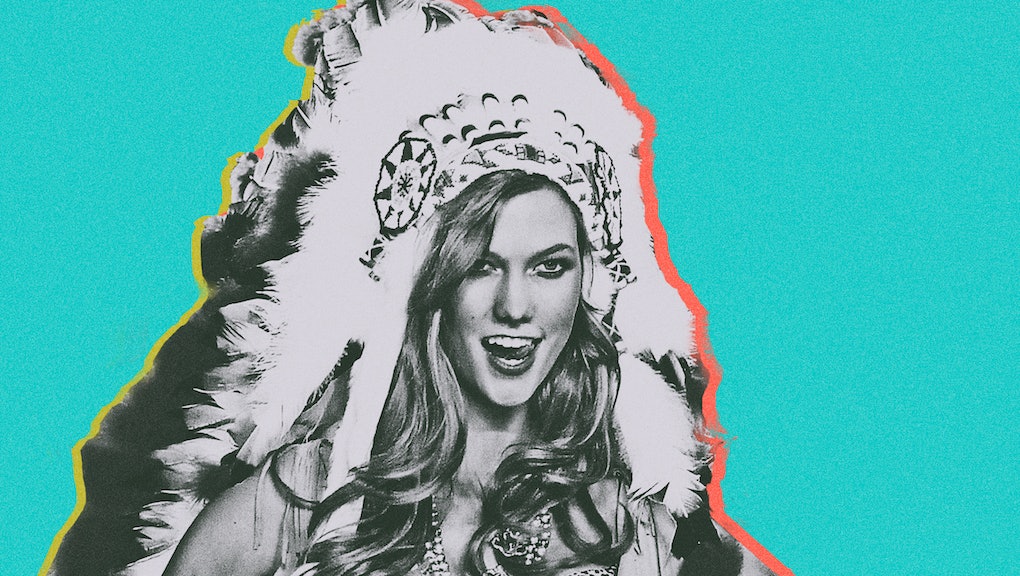 Is it ever OK for a white person to wear a feather headdress?

Every year, at music festivals across the country, white people come equipped with flash tats, face paint, sunscreen, bottles full of vodka water and, unfortunately in some cases, they bring a feather headdress inspired by a culture that is not their own.

They may think the feather headdress goes with their "hippie festival look," but that doesn't mean it's OK to wear. In fact, for many, it's downright offensive.

Many different cultures have their own version of the headdress, from areas in the Caribbean and Africa, but headdresses that are clearly trying to emulate the Native American headdress, remain among the most prevalent. Within just the past year, feather headdresses, when worn by people who aren't Native American, have drawn ire across the world. In Canada, they've been banned at a number of music festivals and in the U.K., they've been banned at Halloween celebrations.

But still, the trend of people who aren't of native heritage wearing them lives on. Take Khloe Kardashian (more than once), Karlie Kloss on the runway for Victoria's Secret, Gus Kenworthy on Halloween or Pharrell on the cover of Elle U.K. Just this year, the retailer Free People was slammed for its festival collection, which did indeed have several native-inspired feather headdresses for sale.

This is an ongoing trend that makes some people uncomfortable — and for good reason. It's wearing someone's culture as if it were a cute and fun costume, not as something that is full of meaning and tradition. It's people borrowing the identity for a few hours and returning it, not grappling with the reality of being Native American and the ongoing stigmatization many Native Americans face. It also helps further the stereotype that Native Americans are still wearing buckskin and feathers, and neglects the diversity within the more than 562 Native American nations.

So, all of this back and forth sparks the ultimate question: "Is it ever OK for a person who isn't Native American to wear a feather headdress?"

To answer that question and more, Mic spoke with a number of designers with native heritage on what they think about all those non-natives wearing headdresses to Coachella.

What is your first reaction when you see a white person wearing a feather headdress?

For most of the people we talked to, their first reaction was either to ignore it or try to laugh at it, mostly because they're just too exhausted trying to rationalize a person's decision to wear one to something as random as a music festival.

"It's like, 'Really, we're still doing this?" Jamie Okuma, a Native American fashion designer from the Luiseño and Shoshone-Bannock tribes, said in an interview. "'OK. Well, you look whack.'"

"When I see them in photos from Coachella, I just roll my eyes," Bethany Yellowtail, an Apsáalooke fashion designer, said in an interview. "I don't get angry anymore because it's just people who don't know who we are as native people."

But for Pat Pruitt, a designer with Laguna Pueblo and  Chiricahua Apache ancestry, it's more difficult to not get angry, because it's not like people haven't been vocal about why wearing a headdress would be offensive.

"I just shake my head," Pruitt said in an interview. "Like now my reaction is so because there is information out there that says, you know, you probably shouldn't be wearing that. We're in an age of ignorance by choice."

Would you say that wearing a feather headdress is technically cultural appropriation?

According to Kristen Dorsey, who is of Chickasaw heritage, wearing a headdress is obviously cultural appropriation, because it's a person wearing a culture that just isn't theirs.

"Yes," Dorsey said. "They're not a part of that culture. And it's not like if you're just Native American, you get to wear one either. It's very specific to specific tribes and to specific people who have earned that honor."

To Dorsey, it would be like if someone who wasn't in the military decorated themselves like they were.

"It's just like how if people were to don military honors and decorations on their blazers without having actually gone through the process of wearing them," Dorsey said. "It would be seen as disrespectful and inappropriate, but for this, no one is really leading the outcry."

For Okuma, the conversation is a bit more complicated than that. To her, those white people wearing turkey feather headdresses at Coachella aren't appropriating because they are so different than the headdresses that are actually worn by natives during ceremonies.

"This may change, but right now I don't think they're culturally appropriating it because it's not like they're trying to be native wearing it," Okuma said. "I don't feel like it's stealing my culture. Those are not eagle feather war bonnets. Those are turkey feather carnival headdresses. They are so different than the real thing."

Why do people have such strong feelings?

One of the reasons why people have such strong feelings about people who aren't native wearing feather headdresses is because it's a clear example of white privilege. It is white privilege in action.

"It boils down to privilege and the attitude that comes with white privilege," Dorsey said. "The notion that the rules don't apply to you. You should be free to do whatever you want, but your community hasn't experienced this kind of trauma. Native religions were outlawed at one point, so any piece of culture is incredibly important for tribes to maintain and revitalize."

It is also turning something that is truly sacred and special into a cheap accessory.

"They're earned," Pruitt said of the headdresses. "Back in the day, it was hard to capture an eagle for those feathers, so there's a whole story that goes along with it. That journey, going down that path, for someone to attain one was special. Now, to see someone who didn't go through that wearing this headdress, it's insulting."

It's almost as if their culture is being erased, or very obviously forgotten about.

"It goes along with this idea that we're something of the past," Okuma said. "I don't know any other race of person that gets so widely impersonated like this. Just recently, it was around Thanksgiving, and I ran into a bunch of people dressed up as pilgrims and indians. They were so pissed off that we even had the nerve to even ask them what they were doing."

Why do you think headdresses remain so popular at things like Coachella?

According to Dorsey, the act of slipping on a native-inspired headdress continues to be popular because people really aren't thinking about Native Americans, or even understanding that Native Americans and their culture are still alive and well.

"We live in a country where native issues are always on the back burner of what the media is discussing," Dorsey said. "People are really unaware of the many challenges of people of different cultures. And, also, people are still unaware that the culture still exists."

Now, as far as why music festivals like Coachella seem to be a breeding ground for this sort of behavior is... confusing to say the least for just about everyone.

Per Dorsey, it may be because people see Coachella as a time to wear feather headdresses due to the carefree nature of music festivals.

"I'm not a music festival goer, but I guess it's a space where people want to freely express yourself, wearing all these costumes," Dorsey said. "It's one of those times you can probably get away with it. It's not like you're going into work looking like that."

Or, it may have to do with music festival aesthetic, which often tries to harken back to Woodstock and the 1960s free love era, which Native Americans somehow got wrangled into.

"I think it just stems from the hippy dippy days," Okuma said. "They were in to a lot of the feathers and free love. The kind of stuff they stereotyped native people being into too. We're one with the earth and that kind of stuff."

What do you think it's going to take for this trend to die?

The first step in stopping just anyone from wearing a feather headdress is education.

"Education. Lots of education," Dorsey said. "The more the better. And I think it's really great that festivals have started to ban the headdresses. That is an excellent step."

The next is to make sure that Native American people are seen and heard, so people know that this is a culture that is very much still alive.

"I think the artists and designers like myself and my peers are at the forefront," Yellowtail said. "Whether it be more native artists at these festivals who know how to use our designs appropriately. I just think having more of us present in those spaces, whether it be retail or music festivals, would be good. If you bring an actual native artist, they will not be wearing headdresses at Coachella. I think having more authentic representation of the contemporary native experience would help. And people will see our traditions, which are for us, not them."

OK, definitively, is it ever acceptable to wear feather headdress if you are aren't Native American?

According to the designers we asked, it is entirely circumstantial. For example, it is entirely appropriate if a white person is getting a headdress placed on their head in a ceremony by a native person.

"I was back home and there was an initiative that passed and our community honored the lawyers," Yellowtail said.  "To honor them from our community, we had a pow wow and a dance and our chairmen put a headdress on the attorney who was on the case. In that circumstance, it was very clear that he was being recognized by our community."

Additionally, Pruitt thinks that if a person is honoring a fictional character who wears a headdress, that could be fine too, since it's obviously not done mockingly.

"Two contexts: If that person is honored by a tribe, and they bestowed it to them," Pruitt said. "Because then it's an honor, given from a tribe. The other context would be if there's some cosplay and there was a character that that was part of their regalia. You're in an environment where people are trying to honor a character. There's no ill intent."

But that's not to say that everything associated with Native American culture is off-limits to people who aren't Native American themselves. Sure, you can't wear a feather headdress, but there's plenty of other goods and accessories and even garments you can wear that would be totally acceptable, according to these designers. The key is just buying directly from native artisans.

"The first thing is that you can support native artists and purchase from native fashion brands and jewelers, because it's also supporting cultures," Yellowtail said. "We know what's allowed and what's not. We don't sell headdresses and we don't sell ceremonial wear."

Dorsey thinks similarly, saying that it is so much better to just buy from native artisans because, firstly, they'll never sell you anything you shouldn't wear anyway, and you can also learn the story behind that piece.

"We can tell you what the designs mean," Dorsey said. "It's so much more enriching when you buy something with meaning and with years of process from that artist. You're not just buying the piece but generations of experience."